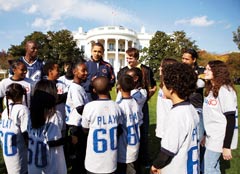 Joined by children from the Washington, D.C. area, the President and players come together for a friendly game of touch football, reminding fans about the importance of being active as part of NFL PLAY 60, the league's youth health and fitness campaign. Filmed on the White House lawn earlier this month by NFL Films, the PSA also encourages viewers to get involved in their communities and remember the importance of service.

Such was a collaboration between NFL Play 60, an effort to fight child obesity, and United We Serve, the President's initiative to encourage community service.

The NFL issued a press release about this last week (video of ad embedded below the fold):

President Barack Obama will join Saints quarterback Drew Brees, Steelers safety Troy Polamalu and Cowboys linebacker DeMarcus Ware in a special public service announcement debuting during each of the three NFL games played on Thanksgiving. The 90-second PSA is a joint effort of the NFL's PLAY 60 campaign, a leaguewide effort to fight childhood obesity by getting kids active for 60 minutes a day, and United We Serve, the President's initiative encouraging all Americans to participate in community service. The spot will continue airing throughout the rest of the season in a shorter format. [...] 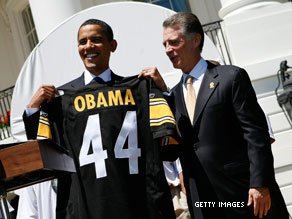 "Through United We Serve, I have challenged all Americans to roll up their sleeves and engage in sustained service to strengthen our communities," President Obama said. "For some of us that means volunteering at a soup kitchen or cleaning up a local park. For others, it means taking time to build a playground or volunteering your time to improve the life of a child. No matter how we serve, we find common purpose when we dedicate ourselves to helping others. This holiday season, I am asking all Americans to find their own way to give back to their communities."

"Thanksgiving is a time when families come together, and it is also a perfect time to focus on the importance of keeping kids healthy and active," said Brees, a PLAY 60 spokesman. "I was honored to spend time with the President on an issue that is clearly important to him. I was also impressed by his wide receiver skills." [...]

President Obama launched United We Serve to challenge all Americans - young and old, from every background across the country -- to create meaningful change in their communities by engaging in service that is sustained and focuses on impact. When volunteers commit to long-term service projects in their communities, they build expertise and strengthen the community's capacity to meet its challenges. To learn more about United We Serve or find service projects in specific communities, the President is encouraging everyone to visit www.serve.gov.

To be sure, NFL Play 60 is a fine, noble program. But it partnering up with the White House's community service initiative mightn't pass the smell test.

After all, what does fighting child obesity and encouraging kids to exercise more have to do with community service?

Of course, Obama's adoring press didn't see anything wrong with this.

Here's what USA Today had to say on November 19: 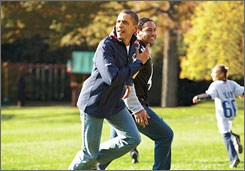 President Obama is exercising executive privilege to get youngsters off their butts, and to urge all Americans to volunteer for community service.

In a TV spot set to run on Thanksgiving Day, viewers will see New Orleans Saints quarterback Drew Brees zinging a pass to an unseen player. As we look closer, we realize the receiver is actually President Obama. The playing field is the White House lawn. The defender is Pittsburgh Steelers safety Troy Polamalu.

Yet, buried at the bottom of the piece was possibly an inconvenient truth:

The president believes his touch football game is only a part of his public-service message.

And media don't see anything wrong with that. I'm not sure they'd be so accepting if the President catching passes from Drew Brees in order to advance HIS message was George W. Bush.

Yet, there's another question here: what is the NFL getting in return, if anything?

Consider what Rush Limbaugh had to say about Obama's connection to the NFL back in October when the conservative talk radio host was forbidden to be a part owner of the St. Louis Rams:

DeMaurice Smith, the executive director of the Players Association is an Obamaite. He's donated to Obama. He is a Washington lobbyist at Patton Boggs, and I think he even served on Obama's transition team. He has no experience in professional sports. The National Football League's agreement, collective bargaining agreement with the players expires soon. Next year, the salary cap -- if they don't get a new deal done, next year the salary cap -- will go away. And after that, there is a fear that the owners -- who think they're giving up too much of the gross in salary, compensation to the players -- might lock them out, a work stoppage. This is something that the Players Association doesn't want, obviously.

And the real reason, the real reason -- and there are many, many reasons that are valid, but the real reason -- that pressure was brought upon me by Sharpton and Jackson and DeMaurice Smith and the commissioner is that the Players Association is using my involvement in the Rams and this whole episode as a bit of leverage in their negotiations, the upcoming negotiations with the league and with the owners on a new collective bargaining agreement. That is what's really going on, and the Players Association... I don't know how many players know this, but Mr. Smith has let it be known that if he has to he'll bring the White House into this. He'll bring the Congressional Black Caucus into this.

So Obama's America is quite possibly going to include the National Football League, and pressure from Obama, the Congressional Black Caucus and other places might be brought to bear on the owners. I can't imagine that that's anything they want. You know, as all businesses are, they're regulated to a certain extent by the federal government but this would be a huge expansion of that. And that threat is being bandied about. And I don't expect anyone to admit it. The owners are not going to admit that. They don't want to. I'm sure that the reaction to this today will be, "Ah, Limbaugh doesn't know what he's talking about." It will be another one of these things, but that is one of the things that I do know is going on behind the scenes.

And of course to make me the poster boy here for, "Oh, my God look! These guys, would they ever consider Limbaugh?" It's designed to intimidate the owners, frighten the owners and say, "We're running this league now, gang, not you. Even though you may own the teams, we're running it, not you," and this was a little warning shot fired across the bow to the owners to say, "Get ready, here we come," for the next collective bargaining agreement.

Exactly five weeks later, the NFL and the White House teamed up for a joint initiative.