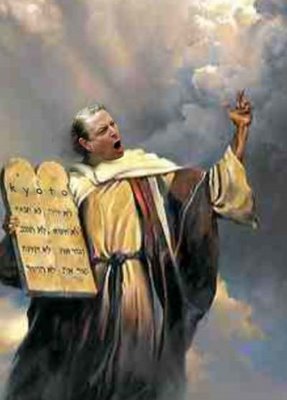 "Al Gore's views on climate change are advancing as rapidly as the phenomenon itself."

Such was Newsweek science editor Sharon Begley's sub-headline of her proselytizing piece "The Evolution Of An Eco-Prophet."

Fortunately for the Goracle's loyal followers, Begley didn't ask him how the planet could possibly have cooled the past eleven years despite his warnings about the plague "carbon dioxide."

As for all those powerful hurricanes Prophet Al hath foretold, tropical cyclone activity has been at 30-year lows for the last three years.

But Begley, although being a "science editor," wasn't concerned about anything so mundane as -- ahem -- science in this article. Heavens no.

'Twas much more important to tell parishioners how the eco-prophet looked:

Dressed in blue jeans and a button-down shirt open at the collar, Gore looks younger than his 61 years: the mountain-man beard he grew in the wake of the Florida recount debacle of 2000 is long gone, and the extra weight, which hung on several more years, is nowhere in evidence.

Frankly, that's about how relevant this 3,458-word love letter is.

But what should we expect from someone who wrote a cover-story in August 2007 entitled, "Global-Warming Deniers: A Well-Funded Machine?"

And let's certainly not forget how she blamed last year's floods in the Midwest on climate change.

Most recently, Begley likened healthcare reform opponents to people who believe there's a link between Saddam Hussein and 9/11.

So when she and Newsweek chose to allocate space for almost 3500-words of nothing but praise for a man whose climatic predictions are looking more pathetic than prophetic, why should anyone be surprised?

Truth be told, Gore really IS an eco-PROFIT; Begley just got the spelling wrong.

But nowhere in this piece was any discussion of his investments in the technologies he's supporting to solve a problem he's purporting.

Why should there be? There really wasn't enough room to get into such things.

Yes, this was a FINE piece of investigative journalism from this so-called "science editor."

Fortunately for readers brave enough to suffer through this tome was the following gem nicely hidden in the third to last paragraph:

(Disclosure: in the book, he praises NEWSWEEK for a 2007 story on greenhouse deniers.)

Couldn't Newsweek have accomplished that in substantially less than 3,458 words?

Even more embarrassing, one of Newsweek's own contributing editors at the time called that article "fundamentally misleading" and "highly contrived" while concluding, "NEWSWEEK shouldn't have lent it respectability."

I guess for Begley and Newsweek, praise from an eco-prophet is more important than respect from one of their own.