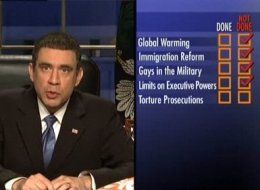 On September 25, NewsBusters asked, "Will SNL take off the gloves and set its sights on the suddenly stumbling, bumbling President?"

On October 3, we got our answer, for on the most recent installment of NBC's "Saturday Night Live," the opening sketch absolutely skewered Barack Obama for having accomplished absolutely nothing since Inauguration Day.

In fact, according to actor Fred Armisen portraying Obama, his two biggest achievements thus far are "JACK and SQUAT!" (video embedded below the fold with partial transcript, h/t Story Balloon):

FRED ARMISEN AS BARACK OBAMA: There are those on the right who are angry. They think that I'm turning this great country into something that resembles the Soviet Union or Nazi Germany, but that's just not the case. But when you look at my record it's very clear what I've done so far and that is nothing. Nada. Almost one year and nothing to show for it.

As a checklist of his agenda items during the campaign appeared on the screen -- global warming, immigration reform, gays in the military, limits on executive powers, torture prosecutions, closing Gitmo, withdrawing from Iraq, improving the status of the fight in Afghanistan, healthcare reform, etc. -- Armisen accurately commented on how they weren't accomplished:

After completing the checklist, Armisen wonderfully said, "So looking at this list, I'm seeing two big accomplishments: JACK and SQUAT!"

And remember, I can do whatever I want. I have a majority in both houses of Congress. I could make it mandatory for all gays to marry, and require all cars to run on marijuana. But do I? No!

But it's not all bad news. I have a few accomplishments. The Cash for Clunkers program really stimulated the economy. Unfortunately it was the economy of Japan!

Let's see, what else? Also, I killed a fly on TV, remember that?

Uh, I brought a white police officer and a black professor together for a beer. Who else could do that? You're right -- Oprah. But no one else.