Maureen Dowd: Joe Wilson's 'You Lie' Outburst All About Racism 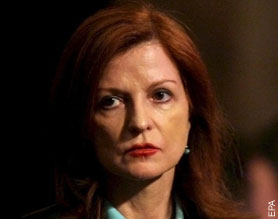 One of the biggest concerns most conservatives had about a Barack Obama presidency was that any criticism of him or his policies would be reported by liberal media members as an act of racism.

Sadly, such fears ended up actually being understated, for since Inauguration Day, the left-wing punditry have routinely depicted anyone with the guts to question the new President -- from Tea Party goers to town hall meeting protesters -- as wearing white robes and burning crosses on folks' lawns.

The latest example is New York Times columnist Maureen Dowd who in her most recent screed attributed Rep. Joe Wilson's (R-S.C.) "You lie" outburst during Wednesday's healthcare speech to the ignorant notion that "Some people just can’t believe a black man is president and will never accept it":

Surrounded by middle-aged white guys — a sepia snapshot of the days when such pols ran Washington like their own men’s club — Joe Wilson yelled “You lie!” at a president who didn’t.

But, fair or not, what I heard was an unspoken word in the air: You lie, boy!

Yep, that is what Dowd heard. And that's what really is the point: to liberals like her, any criticism of a black man by a white man MUST be racist.

The congressman, we learned, belonged to the Sons of Confederate Veterans, led a 2000 campaign to keep the Confederate flag waving above South Carolina’s state Capitol and denounced as a “smear” the true claim of a black woman that she was the daughter of Strom Thurmond, the ’48 segregationist candidate for president. Wilson clearly did not like being lectured and even rebuked by the brainy black president presiding over the majestic chamber.

Rebuked? Was this a touch of honesty on Dowd's part, or a mistake?

After all, moments before Wilson's outburst Wednesday evening, Obama said:

Some of people's concerns have grown out of bogus claims spread by those whose only agenda is to kill reform at any cost. The best example is the claim made not just by radio and cable talk show hosts, but by prominent politicians, that we plan to set up panels of bureaucrats with the power to kill off senior citizens. Now, such a charge would be laughable if it weren't so cynical and irresponsible. It is a lie, plain and simple.

As such, was Dowd admitting, unlike most of her liberal colleagues, that Obama did INDEED "rebuke" Wilson and other Republicans BEFORE Wilson replied?

If so, then maybe the Congressman just didn't like being called a liar who was spreading "bogus claims...to kill reform at any cost," and Obama's skin color had absolutely nothing to do with it.

But Wilson’s shocking disrespect for the office of the president — no Democrat ever shouted “liar” at W. when he was hawking a fake case for war in Iraq — convinced me: Some people just can’t believe a black man is president and will never accept it.

How disgusting. But it got worse:

Barry Obama of the post-’60s Hawaiian ’hood did not live through the major racial struggles in American history. Maybe he had a problem relating to his white basketball coach or catching a cab in New York, but he never got beaten up for being black.

Now he’s at the center of a period of racial turbulence sparked by his ascension.

Actually, Maureen, Obama's the precipitate of this period of racial turbulence, not the victim.

He used the race card to defeat Hillary Clinton in the primaries, and did it again to win the White House. Even former President Clinton said this about candidate Obama, several times in fact.

More importantly, when President Obama was faced with his first racial issue during the Gates-Crowley episode, he haplessly enflamed the situation by saying the Cambridge police acted stupidly.

As such, blaming the current racial turbulence on Obama's ascension, to quote the President himself, is a lie, plain and simple.

Unfortunately, we've grown to expect nothing else from Dowd and her ilk, and I must be racist for saying so.