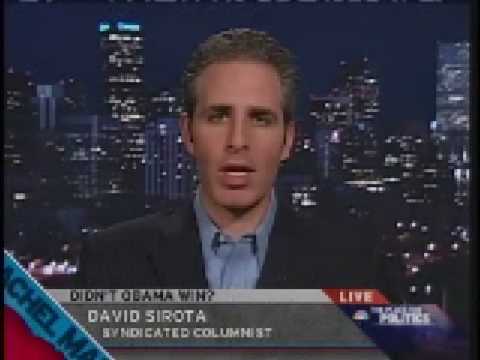 "The White House is listening to the right-wing's political terrorists, people like Glenn Beck."

He also called Van Jones "a national hero" who was "originally targeted because he's an African-American man" (video embedded below the fold courtesy Breitbart with full transcript):

JOHN ROBERTS, CNN ANCHOR: The president hired Van Jones to find more green jobs, putting more Americans back to work and helping the environment. Now, Jones is looking for a job himself. He has been under fire for some pointed comments about Republicans and a petition that he signed back in 2004 questioning what the Bush White House knew about 9/11. He has now resigned.

To talk more about that, let's bring in syndicated columnist David Sirota and David Frum, the editor of newmajority.com and former speech writer for the Bush White House.

David Sirota, let's start with you, because you wrote quite a scathing column that appeared on the newleft.org and as well on the HuffingtonPost.com, saying you're absolutely outraged by the way the White House handled this.

DAVID SIROTA, SYNDICATED COLUMNIST: Van Jones is a national hero for his work on green jobs. He's known as an expert on energy policy, on economic policy. He's somebody who made a mistake, who acknowledged that he made a mistake a long time ago, and he was tossed out by this White House.

The White House has stood by other people, like Ben Bernanke, who has really been at the heart of our economic problems. And they're basically putting Van Jones out to pasture because of something Van Jones said was a mistake.

And what I think what's going on here is that the White House is listening to the right-wing's political terrorists, people like Glenn Beck, people like conservative activists who have targeted Van Jones because Van Jones is an African-American with a progressive movement background working on behalf of social justice.

That's something, unfortunately, that is apparently, according to the right-wing, not allowed in this country.

ROBERTS: Let's bring in David Frum. What do you think about what David Sirota just said there, and did the president have any choice but to ask for the resignation of Van Jones?

DAVID FRUM, FORMER BUSH SPEECH WRITER: Look, denying the truth about 9/11 is not an intellectual mistake. It is an attempt to shift the blame for one of the worst crimes in history from the people who did it to the people who suffered. It's not unlike holocaust denial in that way.

And this is not a right or left issue. When President Clinton, Bill Clinton was confronted by such people at an event in 2007, he reacted decently. He said, how dare you. And I think that's the way all Americans feel.

Van Jones may have done all these other good things, or not. If you are associated with this kind of horrific lie -- and by the way, the only -- he must also have lied to his superiors in the White House in not alerting that he had done such a thing -- if you traffic in such a horrific lie, you have no place in American government.

ROBERTS: David Sirota, it's one thing to when you're an activist and you're not actively in government to criticize the opposition, but when you signed that petition that questioned whether or not the Bush administration knowingly allowed 9/11 to happen, it's known as the "9/11 truthers petition," I mean, he said that he didn't read it all the way through, you put your name to something you didn't read all the way through, was that a big enough mistake that he couldn't serve in this administration?

My point here is that what are the standards, right? You have a Bush administration, for instance, that lied us into war. Nobody was fired at all for that. Thousands of people have died because of that.

You have an economic team that has conflicts of interest with the financial industry that it's regulating. Nobody has said a thing about this.

ROBERTS: Let's bring in David Frum. Was this a matter of race, David Frum?

FRUM: I think that's crazy. And I think David Sirota does his own cause an injustice. His administration did do the right thing here. If Glenn Beck went on TV, and he fulminates all the time, and he says all these foolish things, I never like being on the same side of him. It was not Glenn Beck, however, who discovered this fact that destroyed Van Jones' political career. That was discovered by...

SIROTA: But he was originally targeted...

The thing was Gateway Pundit got the goods. It discovered he was a 9/11 denialist. It is not a mistake, it is a lie. It is a hurtful lie. It is a terrible lie. It is a lie that completely invalidates -- and by the way, Van Jones, why would someone that would believed the United States government would murder 3,000 of its own people want to work for such a terrible government?

ROBERTS: All right, so Van Jones is gone, he's not going to be back. But let's look at this going forward.

David Sirota, do you think now that Republicans smell blood in the water, and they're going to go after the remaining 30 or so czars that this administration has got left, people who were in prominent positions who didn't have to go through Senate confirmation to get their jobs?

SIROTA: Absolutely. I think what the White House has done has said to a right wing lynch mob that they will accept their demands, their politically -- their political terrorism.

And so the next time, the next target of this lynch mob, I think, you're not going to be able to appease them. I think the White House is on the retreat. And I think it's really been a political mistake as much as anything.

SIROTA: It was a witch hunt, and a lynch mob going after this guy.

FRUM: He acted as the David Irving of Al Qaeda.

SIROTA: He said that he was sorry. He said he made a mistake.

FRUM: He shouldn't have done it.

ROBERTS: David Sirota and David Frum, I hate to jump in here as the referee, but I'm going to have to get in between you here. We're out of time, unfortunately. Great discussion this morning, gentleman. Thanks both for joining us.

David Sirota on the left, David Frum on the right, appreciate it very much.

Exit question: Do liberals really believe calling conservative talkers racists and terrorists is furthering their cause?