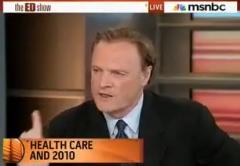 Is it a requirement at MSNBC that program hosts interrupt conservative guests whenever possible thereby preventing anyone other than liberals to make a point?

Such certainly appeared to be the case Thursday evening when Lawrence O'Donnell filled in on "The Ed Show" and treated his guest, Peter Schiff, more poorly and unprofessionally than just about anything I've ever witnessed.

It was so bad that by the end of the segment, when O'Donnell said, "We're out of time. I gave you as much time as you wanted to tell me one thing," Schiff marvelously replied, "But you kept interrupting me."

Of course, since Schiff has just formed an exploratory committee to examine a possible run for Senate in 2010 against Sen. Chris Dodd (D-Conn.), the folks at MSNBC probably think O'Donnell did a good job (video embedded below the fold with full transcript, h/t Ed Morrissey):

What are the Democrats afraid of when it comes to the health care debate? It's not people shouting them down at town hall meetings now. They're afraid because it's hard to explain a hugely complex policy and very easy to distort it.

My next guest has formed an exploratory committee for the 2010 Senate race in Connecticut. He is a Republican who would challenge Chris Dodd, the acting chairman of the Senate Committee on Health, Education, Labor and Pensions, and the driving force for a public option.

Peter Schiff is the president and chief global strategist of Euro Pacific Capital, a Westport, Connecticut-based brokerage firm. He's also the author of the book "Crash Proof: How to Profit From the Coming Economic Collapse."

Peter Schiff, your book coming out in 2007 predicted everything we're going through now, with the recession and the collapse and the markets and all that.

Exactly. And more important, it predicted all the foolish things the government would do to try to solve the problem and why all those things would make the problem worse.

O'DONNELL: OK. So let's say you get the money and you're running for Senate in Connecticut in 2010. What's your position on health care reform?

SCHIFF: Well, first of all, I want to make sure that Chris Dodd doesn't have a chance to do for health care what he did to the banking industry. You know, the problem with health care is that it's too expensive, and the reason it's so expensive is because of government involvement in the system, and because of an overutilization of insurance because of tax subsidies that force people or get people to buy insurance to cover ordinary medical expenses.

O'DONNELL: OK. In the campaign you're going to have 30 seconds to say what you're in favor of.

SCHIFF: I'm in favor of free markets. I think the free market can deliver quality health care at lower costs.

SCHIFF: No, no. I'm in favor of doing something-getting the government out of the market.

You have to remember what insurance is for. Insurance is to pay for catastrophic events that are unlikely to happen. People have fire insurance because their house probably won't burn down.

O'DONNELL: So, you want to remove all the government regulations, state and federal regulations in place right now, to prevent health insurance companies from abusive practices?

O'DONNELL: You want to let them continue to deny anyone who has a pre-existing conditions, to put limits on the policy? You want bankruptcy-it's the number one cause of bankruptcy-to continue to be the failure of the health insurance system?

SCHIFF: No. You have to understand why health care is so expensive. If you look over the last six years, the cost of...

O'DONNELL: We all understand why it's expensive.

SCHIFF: Hold on. No, obviously you don't understand why it's expensive.

O'DONNELL: We get it. The question is, what do we do about it now?

SCHIFF: I am not in favor of the government getting more involved.

O'DONNELL: Is there one sentence you're in favor of?

SCHIFF: No. What I want to do is I want to bring market forces back to play to control costs and have...

O'DONNELL: So, in everything you're aware of in the House bills or the Senate bills, there's not a single thing that you're in favor of?

SCHIFF: No, the bills are bad.

O'DONNELL: You would say no to every sentence in those bills?

SCHIFF: Because all they're going to do is drive costs up further and drive down quality. We need market dynamics, just like we have in every other industry.

O'DONNELL: If they do pass health care reform, Chris Dodd's going to come back to Connecticut as one of the heroes of the health reform crusade, having led it.

SCHIFF: I'm sure he'll portray himself that way.

O'DONNELL: And in your campaign-OK, sure.

SCHIFF: Right. But in actuality...

O'DONNELL: And your campaign will stand there and say every single sentence of the legislation he passed was bad?

SCHIFF: Right. I will tell the truth. I will tell the public that there is no Santa Claus, that whenever the government comes and promises you something for free, you better watch out, because it's going to cost a lot more than you think.

O'DONNELL: So you would have the government pull out of the Medicare system? You'd abolish that, right?

O'DONNELL: It's a complete single payer, government-run system health care system. It's as socialistic as the Canadian system.

O'DONNELL: It's for everyone 65 and older. And you would say end that tomorrow?

SCHIFF: I can't say that, obviously.

SCHIFF: Well, look, because you built up this culture of dependency over the years. You can't turn it off overnight.

O'DONNELL: Those lazy dependent seniors in Connecticut; right? Those lazy Connecticut citizens over 65 who refuse to pay for their own health care?

SCHIFF: Don't put words in my mouth. If the government hadn't taxed the hell out of these people while they were working, they would have enough money to afford their own health care, and it would be a lot less expensive.

The government is distorting the free market. It is the root cause of our problems. And there are no solutions that involve more government.

The only solutions involve the free market. They involve capitalism. And health care is important, just like food. We don't want the government growing our food.

O'DONNELL: So you think the massive subsidies that we give to college students in this country to go to college for free, government subsidies, you think that explains tuitions?

SCHIFF: Yes, it benefits-yes, of course.

O'DONNELL: Can you tell me-you're in New York City right now. You know what a private school tuition is for a high school in New York City? It's over $30,000. There's not one penny of government support for that tuition.

You look at what private...

O'DONNELL: Look, it is such a small sliver of what goes into...

SCHIFF: No it's not.

O'DONNELL: ... the tuition mix. The reasons tuitions go up is because teachers' salaries go up over time. They go up directly proportionately.

SCHIFF: But why isn't there competitive forces keeping them down? It's not salaries for teachers, it's the administrative bureaucracy.

The beneficiaries of the student loan programs are the universities, and our kids are graduating from college now hundreds of thousands of dollars in debt. Why is that a good thing?

O'DONNELL: All right. Chris Dodd is the leader of the Education Committee, too, so you're going to have a good debate with him about free market education in Connecticut.

But just to get you clear on the record now, if you were in the United States Senate now, ,and if you were voting on health care reform this year, you would vote no to every single proposal made by a Democrat or Republican in the Senate this year; right?

SCHIFF: Well, it depends on the proposal. The ones on the table now, yes.

SCHIFF: One thing that I would support would be reducing income taxes and then making...

O'DONNELL: There's not a single thing that any Republicans has suggested that you would vote for.

SCHIFF: And then I would tax health care benefits as ordinary income, because I want to take away the preference...

O'DONNELL: Let's get this straight. So let's get you on the record.

Let's get you on the record.

Peter Schiff is in favor of raising taxes on Connecticut citizens who have private health insurance.

O'DONNELL: You want to lower the income tax, but you want to raise taxes on health care benefits.

SCHIFF: No. But there's no net increase.

O'DONNELL: There sure are taxes on health care benefits now. How much do you want to raise them to?

O'DONNELL: Give Chuck Grassley a call. He's the leading Republican on the Senate Finance Committee. He too is currently in favor of raising taxes on people's private health insurance...

SCHIFF: But I only want to do it if we cut their taxes.

O'DONNELL: You have found one sentence of agreement with the Republicans...

SCHIFF: Are you listening?

SCHIFF: Are you listening to what I'm saying?

O'DONNELL: I heard what you're saying and we're out of time.

SCHIFF: I would only do it if we cut taxes.

O'DONNELL: We're out of time. I gave you as much time as you wanted to tell me one thing.

SCHIFF: But you kept interrupting me.

O'DONNELL: You told me one thing.

Peter Schiff, thank you very much for coming in.

SCHIFF: You only heard one thing. That's the problem.

SCHIFF: I want to really reform it by bringing the free market back into it and getting the government out of it.

O'DONNELL: Right. All right, Peter. Thank you very much. We've got to get out of here.

Nice job, Larry. You're quite the professional.

*****Update: My good friend Lee Doren has put a clock on both men to see who talked the most during this interview. Who do you think won?