Why does CBS employ as one of its online editors a blogger who refers to town hall meeting protesters as "teabaggers?"

For those that have chosen to block it out, teabagging is a sexual reference unsuitable for further explanation here.

Yet, Charles Cooper, an editor for CBSNews.com, wrote the following headline at his Coop's Corner blog Thursday (h/t and image courtesy Doug Ross): 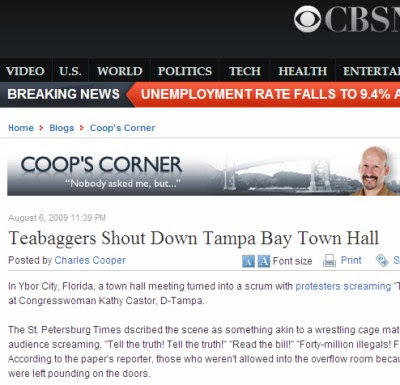 As Ross perfectly stated, "It really has come down to this: the Democrats, the unions and the mainstream media (call those interchangeable parts the tax-takers) have aligned themselves against the taxpayers."

Most right-thinking people believed the media hit a new low last year by giving their  obvious support to Barack Obama while disgracefully trashing Sarah Palin and her family.

Yet, the way the press referred to Tea Party-goers in April, as well as town hall protesters now might actually be worse.

When so-called journalists attack common citizens for speaking out against government policies they don't agree with, something is seriously wrong in our nation.