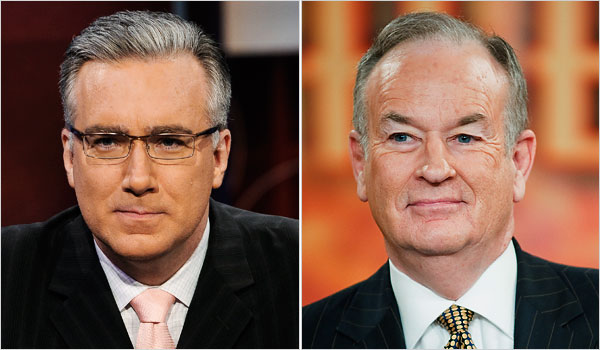 Although the ongoing feud between Fox News's Bill O'Reilly and MSNBC's Keith Olbermann was apparently good for ratings -- likely more for the latter than the former, of course -- the heads of the parent companies of both networks stepped in recently to end the on-air squabble.

Not only that, but News Corporation's Rupert Murdoch and General Electric's Jeffrey Immelt were apparently coaxed into doing so by PBS's Charlie Rose.

The inside scoop was reported Saturday by the New York Times's Brian Stelter (h/t Bruce Bartlett):

At an off-the-record summit meeting for chief executives sponsored by Microsoft in mid-May, the PBS interviewer Charlie Rose asked Jeffrey Immelt, chairman of G.E., and his counterpart at the News Corporation, Rupert Murdoch, about the feud.

Both moguls expressed regret over the venomous culture between the networks and the increasingly personal nature of the barbs. Days later, even though the feud had increased the audience of both programs, their lieutenants arranged a cease-fire, according to four people who work at the companies and have direct knowledge of the deal.

In early June, the combat stopped, and MSNBC and Fox, for the most part, found other targets for their verbal missiles (Hello, CNN).

"It was time to grow up," a senior employee of one of the companies said.

Questions remain as to whether or not O'Reilly and Olbermann agreed to the ceasefire:

Mr. Olbermann, who is on vacation, said by e-mail message, “I am party to no deal,” adding that he would not have been included in any conversations between G.E. and the News Corporation. Fox News said it would not comment.

Given MSNBC's on-air antagonism towards Glenn Beck this week after his remarks about President Obama being a racist, it seems clear border skirmishes at the very least will continue between these two networks.