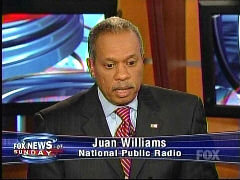 For the second time in less than 48 hours, NPR's Juan Williams accused the press of not doing their job in properly reporting the deeds and doings of America's new President Barack Obama.

Having accused the news media of "kowtowing to the Obama administration" during Friday's "Special Report" on FNC, Williams went even further on Sunday's "Fox News Sunday" (h/t Jennifer Rubin):

[W]hat really, you know, strikes me is the celebrity nature of the treatment, the coverage of him as a celebrity versus the policy-maker...So you know, the problem here is he's not being treated as a politician. The press is not being sufficiently adversarial, which is its role, to hold him accountable.

What follows is an embedded video of this entire extremely candid discusion of the press's abdication of journalistic integrity along with a transcript:

PRESIDENT BARACK OBAMA: It wasn't easy coming up with fresh material for this dinner. A few nights ago, I was up tossing and turning, trying to figure out exactly what to say. Finally, when I couldn't get back to sleep, I rolled over and asked Brian Williams what he thought.

CHRIS WALLACE, HOST: And that was President Obama at a dinner with reporters Friday making his own joke about what many believe is a sweetheart relationship between the White House and the mainstream media.

And we're back now with Stephen, Mara, Byron and Juan.

So let's go over the record, and let's put it up on the screen. CBS is running an interview today with Barack Obama, "An American Dad."

ABC is running coverage throughout the day on Wednesday of President Obama's health care plan including a prime-time town hall.

Tom Brokaw was named this week to a presidential commission.

Steve Hayes, how do you explain all of that?

STEPHEN HAYES, THE WEEKLY STANDARD: A lot of people call Newsweek now "Obamaweek" because they've put him on so often. Look, I mean, clearly, his joke about rolling over and finding Brian Williams is more than just a joke. I mean, I think the sense is -- and you've provided evidence that it's true -- that he's in bed -- the media are in bed with Barack Obama.

I don't think there's any question that he's had better treatment than any president in recent memory, in decades.

WALLACE: And why do you think that is?

HAYES: Well, I think there are two reasons. One, I think people are genuinely cheering for him. I mean, I think this -- he is breaking barriers, and there's something genuinely exciting about that that journalists are not supposed to allow to affect their coverage, but they do.

And secondly, there's a clear ideological affinity for Barack Obama and his programs. And we've seen that in the discussions of -- in the debates that have taken place over the first six months.

I mean, think about the torture debate. There's a debate about the language to be used there. Is it enhanced interrogations or is it torture? And everybody, with unanimity, across the media call it torture. They've made a decision. There's a debate going on. They're not part of it. They're on one side of it.

WALLACE: Let me add something to this, Mara. It isn't just the amount of coverage. It's also the tone. And let's put up on the screen a recent analysis that was done of Obama's first 100 days in media coverage.

MARA LIASSON, NPR: Look, I think that there's definitely something to this kind of aura of incredible celebrity and excitement. And you know, you go to any newsstand, and it's a sea of Obama faces, and then there's a shelf for Bo and another shelf for Michelle, but -- and people are truly fascinated.

On the other hand, some of those numbers are reflective of -- look, Bill Clinton had an incredibly chaotic first 100 days. There was a pratfall every other day to cover. George Bush was the result of -- I'm assuming that was the first term -- was the result of...

LIASSON: ... a contested election. And Barack Obama came in as a real majority winner. He has a big majority in Congress.

WALLACE: Oh, come on, (inaudible) some of it is because he's got liberal ideas?

LIASSON: Yes, there's definitely some of it. But when he starts -- when his programs run into trouble, there was a headline in the New York Times next week, you know, "Obama's Plans Hit," you know, "Obstacles ," or, "Snags." I mean, when there is opposition, it should be and I think is covered by the media.

And it's hard to talk about the media as just one thing, because it's not. He is popular. And I think as soon as things turn for him, the media, like lemmings, will turn, too, unfortunately.

BYRON YORK, WASHINGTON EXAMINER: You know, this has led to a certain undertone of contempt from Obama to the press. Did you -- I felt that in the Brian Williams joke and at the earlier White House Correspondents Dinner. Obama said, "Most of you covered me. All of you voted for me."

But the Pew poll that you mentioned earlier about the positive coverage said that in this case, in Obama's case, as was not the case with Bush or Clinton, an enormous amount of the coverage focused on the president's personal characteristics, his personal appeal, rather than his policy stuff, what he actually wants to do.

JUAN WILLIAMS, NPR: I think there have been a couple of changes that have taken place in the media universe -- for example, the Internet. I think the Obama team has made masterful use of that. I think their communication strategy has been terrific.

But what really, you know, strikes me is the celebrity nature of the treatment, the coverage of him as a celebrity versus the policy- maker.

And if you look at the NBC ratings -- and this is, you know, just the hard fact -- they got 9 million people to watch "Inside the Obama White House." Well, once they cash in like that, then everybody else is going to belly up to the table, too.

And similarly, the reason he's getting these magazine covers is apparently there's this great thirst. You look at the newspapers in the country -- on Inauguration Day, they all had special sections, and they continue to sell those special sections.

So you know, the problem here is he's not being treated as a politician. The press is not being sufficiently adversarial, which is its role, to hold him accountable. And part of this, I think, goes back to the campaign.

But that's not the role that the press should play. And just the way that you can condemn someone because of their race or because of difference, I fear that they're now celebrating him and hold him -- holding him and Michelle up to unreasonable standards and that they will jump off.

WALLACE: Steve, I think that Juan puts -- raises a really interesting question. How much of this is liberal association, and how much is just pure greed?

The fact is that Obama, whether you like him or not, sells magazines. He draws viewers. As Juan rightly points out, those two Brian Williams specials, "Inside the Obama White House," were in the top 10 highest-rated shows on TV that week.

HAYES: Yeah, no question. I think it's actually both, and I would -- I would add a third category to that. I think there is, in Washington in particular, a huge "do something" bias where governments are faced with problems, and there's a push for politicians and particularly presidents to do something to solve the problems, even when the right answer might be for politicians to step back and actually do nothing.

Now, he is doing something on a level that we haven't seen forever. But I think one of the reasons that Mara can cite a New York Times headline that says he's having trouble is because it's the exception, not the rule.

And if you look at the first two months of coverage, the New York Times had 73 percent of front-page stories that were favorable. I mean, that is extraordinary.

WALLACE: So, Mara, you've seen presidents come and go. How long does the honeymoon last, and...

LIASSON: I think the honeymoon is probably going to wind down some time this fall. If he was -- if the media was in charge of everything, why has the public plan, you know, hit a road block? Why isn't his health care plan sailing through? His own Democrats can't agree. If everything was...

WALLACE: Well, I don't know that they're saying the media is in charge of everything, but they certainly seem to be supportive of a lot of his...

LIASSON: Well, but I don't think that the -- that the problems with his health care plan and the intense opposition to pretty big parts of it have been ignored.

YORK: Even with the positive coverage, the public has opposed some things. They opposed Guantanamo. They very much oppose what he has done with the car companies.

And when substance actually enters the debate and they can't just cover the dog and Mrs. Obama's arms, people will oppose that.

WALLACE: Having said that, they put up a picture of the dog, Bo. Pretty cute. As I've said, this is a no -- we don't slam Bo here. Thank you, panel. See you next week.