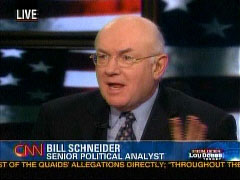 For almost a week, Americans have been told by liberal bloggers, Keith Olbermann, Rick Sanchez, and David Shuster that conservative talkers are lying about the Obama administration's plans to enact stricter gun laws, and that this is what caused Richard Poplawski to kill three police officers in Pittsburgh, Pennsylvania, last Saturday.

You know who's been telling the American people Obama wants to take away guns? Members of his own administration, that's who.

Such was reported Wednesday evening by CNN's Bill Schneider in a piece addressing a new poll that found only 39 percent of Americans support stricter gun laws compared to 46 percent who want no change to current legislation (video and transcript below the fold, h/t Glenn Reynolds):

WILLIAM SCHNEIDER, CNN SENIOR POLITICAL ANALYST (voice-over): Binghamton, Pittsburgh, Oakland, Samson, Alabama, Carthage (ph), North Carolina, sensational incidents of gun violence all over the country. Are we seeing an impact on public opinion? Since 2001, a majority of Americans has favored stricter gun laws though support has been trending slightly down and now a sharp, sudden drop.

Only 39 percent of Americans now favor stricter gun laws according to a CNN/Opinion Research Corporation poll. It may have to do with President Obama and the new administration.

SEAN HEALY, ATTORNEY: If he and the people in control of Congress right now could have what they want, they would heavily restrict or eliminate guns from this country.

SCHNEIDER: They may have heard what the new attorney general said.

ERIC HOLDER, U.S. ATTORNEY GENERAL: There are just a few gun related changes that we would like to make, and among them would be to reinstitute the ban on the sale of assault weapons.

SCHNEIDER: And what the new secretary of state said about the ban.

HILLARY CLINTON, U.S. SECRETARY OF STATE: I, as a senator, supported measures to try to reinstate it. Politically, that is a very big hurdle in our Congress. But there may be some approaches that could be acceptable, and we are exploring those.

SCHNEIDER: The country is seeing a surge in gun sales.

STEVE PRATER, LOCK 'N' LOAD MANAGER: Everybody kind of got scared. The market got depleted.

SCHNEIDER: Support for tougher gun laws has held fairly steady among Democrats. The sharp drop has been among Independents and Republicans where there are fewer Obama supporters.

(on camera): The Gallup poll reveals a gradual long-term decline in support for gun control from the early 1990's to 2008. In fact support for handgun ban was down to 29 percent, the lowest figure in 50 years. That coincides with the decline in the nation's murder rate. But this year's sudden drop seems to have been influenced by politics.

Hmmm. So, conservative talkers AREN'T making up this notion that the Obama administration is interested in stricter gun laws?

Does that mean the killings in Pittsburgh AREN'T Glenn Beck's fault?

Hmmm. Well, I guess Glenn should be getting an apology from folks like Olbermann, Shuster, and especially Sanchez given his colleague's presentation of the facts in this matter.

Readers are advised the video above was done especially for CNN.com, and is different than the transcript which came from Wednesday's "Lou Dobbs Tonight."