As the returns come in, many media outlets will begin sharing exit poll data.

Studies of the last four presidential elections have shown these exit polls to be tremendously skewed towards the Democrat -- meaning that they showed a much greater percentage of the vote going to the Democrat than the actual results.

With this in mind, NewsBusters readers are warned to take them with a grain of salt.

Below the fold is a memo concerning this matter from the polling organization Public Opinion Strategies:

As we have seen in previous election cycles, the exit poll results do leak early and that ends up influencing the coverage of the race before even the first state polls close at 6:00 PM Eastern. [...]

Here are the key points to keep in mind when the exit poll data starts being leaked:

1. Historically, exit polls have tended to overstate the Democratic vote.

3. The exit polls have tended to skew most Democratic in years where there is high turnout and high vote interest like in 1992 and 2004.

4. It is not just the national exit poll that skews Democratic, but each of the state exit polls also suffers from the same Democratic leanings.

After the 2004 election, the National Election Pool completed a study investigating why the exit polls that year showed John Kerry over performing 5.5 net points[1] better than the actual results showed him to have done. Their conclusion was that the primary reason the exit polls was that Kerry voters and Democrats were more likely to participate in the exit polls.

"Our investigation of the differences between the exit poll estimates and the actual vote count point to one primary reason: in a number of precincts a higher than average Within Precinct Error most likely due to Kerry voters participating in the exit polls at a higher rate than Bush voters. There has been partisan overstatements in previous elections, more often overstating the Democrat, but occasionally overstating the Republican."[2] (Emphasis added)

We believe that this will hold true this year. The recent Fox News survey[3] showed that 46% of Obama voters said they were very likely to participate in the exit polls, while just 35% of McCain supporters are.

In fact, even the 2004 exit poll report noted that higher turnout nationally and higher levels of voter interest in both 1992 and 2004 correlated with greater Within Precinct Error.[4]

So given that turnout is expected to be even higher than 2004 and that Democrats are more likely to participate in the exit polls, this means we should expect greater fluctuation and variation in the exit polls from the actual election results.

Based on the previous exit poll results, we should expect once again that Tuesday's exit poll data could overstate the Obama vote and under represent the McCain vote.

Something to bear in mind is that given the race element this year, exit polls could be even more skewed towards the Democrat than usual.

To give you an idea why, just imagine how difficult it might have been for exit pollsters to find folks willing to admit they voted for McCain with these two Black Panthers standing by the front door of the polling station at 1221 Fairmount Avenue in Philadelphia: 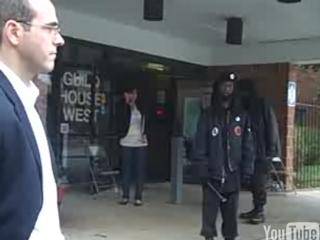