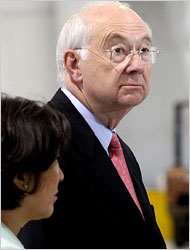 Does the Washington Post agree with former Sen. Phil Gramm's recent assessment that "We have sort of become a nation of whiners" when it comes to the economy?

After all, the Post published an op-ed Saturday by economic historian Amity Shlaes entitled "Phil Gramm is Right."

Although readers are strongly encouraged to review the entire marvelous piece, the following are some of the highlights (emphasis added throughout, photo courtesy NYT):

Gramm was right about the recession and stood by his recession comments on Thursday. A recession is two consecutive quarters in which the economy shrinks, and last quarter it grew. But no matter. Voters feel they are in a recession, and so they are, at least according to Campaign Econ.

Campaign Econ is certainly understandable. Gas prices are ruining vacation plans and killing businesses. Many Americans have lost or are about to lose their homes to foreclosure or in distress sales. The federal government may not be talking about it much yet, but inflation plagues the country. The weak dollar is altering our everyday calculations. For many, this is not a happy summer.

Still, to liken the current moment to the Great Depression, or even the early 1980s, as Campaign Economists have, is to whine, just as Gramm said. During the Depression, people lost their homes even though they had borrowed only 10 percent of the purchase price. People losing their homes today frequently have borrowed 90 percent or more. The country approached double-digit unemployment in the early 1980s. This week, even as McCain was trying to talk his campaign past Gramm's comments, joblessness stood at a historically modest 5.5 percent.

And Campaign Econ has costs. The first is that talk of a downturn -- or "mental recession," as Gramm put -- can itself generate a downturn. Keynesian economists say this is so because consumer spending slows when people are afraid. But there's also a non-Keynesian dynamic. Grumbling leads to costly government rescues that scare markets and slow growth. [...]

In short, to fix it all, we need a frank conversation about the economy. McCain, in fact, inaugurated one back in 2006 when he gave a speech that was downright Gramm-like at the Economic Club of New York.

In that speech, McCain said that on entitlements, hard choices were necessary. He concluded: "Any politician who tells you otherwise, Democrat or Republican, is lying."

This was McCain at his best. Many voters knew it, too.

The way to strengthen the economy right now is to elect leaders who dare to talk about problems in precise and even technical terms -- and then act on them. McCain has that capacity, but only if he can transcend Campaign Econ.

As a sidebar, clearly the Post doesn't agree with every op-ed it publishes. I just find it interesting the Post's opinion editor would publish this one that goes so counter to leftwing economic dogma.