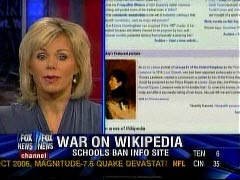 The connection? Oftentimes "inaccurate or deliberately misleading information" published by Wikipedia being taken as fact by unsuspecting readers.

In the case of climate change, such inaccurate or deliberately misleading information acts to solidify the myth being espoused by Nobel Laureate Al Gore as millions of people across the globe believe Wikipedia is a purely factual resource.

As the Scotsman reported on June 21, such an assumption carries risks (emphasis added):

The Scottish Parent Teacher Council (SPTC) said pupils are turning to websites and internet resources that contain inaccurate or deliberately misleading information before passing it off as their own work.

The group singled out online encyclopedia Wikipedia, which allows entries to be logged or updated by anyone and is not verified by researchers, as the main source of information. [...]

Eleanor Coner, the SPTC's information officer, said: "Children are very IT-savvy, but they are rubbish at researching. The sad fact is most children these days use libraries for computers, not the books. We accept that as a sign of the times, but schools must teach pupils not to believe everything they read.

"It's dangerous when the internet is littered with opinion and inaccurate information which could be taken as fact." [...]

Ronnie Smith, the general secretary of the Educational Institute of Scotland, said there was a higher risk of inaccurate information on the internet than in books. He added: "We need to make sure youngsters don't take what they read online as fact."

Several further education institutions have already banned students from using the interactive encyclopaedia. At one college in Vermont in the US, a history professor found several students repeated the same error in exam papers. On discovering the information came from Wikipedia, the college outlawed its future use.

With this in mind, Solomon's piece published at National Review Online Tuesday is even more concerning (emphasis added):

Ever wonder how Al Gore, the United Nations, and company continue to get away with their claim of a “scientific consensus” confirming their doomsday view of global warming? Look no farther than Wikipedia for a stunning example of how the global-warming propaganda machine works. [...]

Kim Dabelstein Petersen is a Wikipedia “editor” who seems to devote a large part of his life to editing reams and reams of Wikipedia pages to pump the assertions of global-warming alarmists and deprecate or make disappear the arguments of skeptics. [...]

Now Petersen is merely a Wikipedia “editor.” Holding the far more prestigious and powerful position of “administrator” is William Connolley. Connolley is a software engineer and sometime climatologist (he used to hold a job in the British Antarctic Survey), as well as a serial (but so far unsuccessful) office seeker for England’s Green party.

And yet by virtue of his power at Wikipedia, Connolley, a ruthless enforcer of the doomsday consensus, may be the world’s most influential person in the global warming debate after Al Gore. Connolley routinely uses his editorial clout to tear down scientists of great accomplishment such as Fred Singer, the first director of the U.S. National Weather Satellite Service and a scientist with dazzling achievements. Under Connolley’s supervision, Wikipedia relentlessly smears Singer as a kook who believes in Martians and a hack in the pay of the oil industry.

“[Benny] Peisers crap shouldn’t be in here,” Connolley wrote several weeks ago, in berating a Wikipedian colleague during an “edit war,” as they’re called. Trumping Wikipedia’s stated rules, Connelly used his authority to ensure Wikipedia readers saw only what he wanted them to see. Any reference, anywhere among Wikipedia’s 2.5 million English-language pages, that casts doubt on the consequences of climate change will be bent to Connolley’s bidding.

Scary stuff, wouldn't you agree? After all, there are millions of people around the world whose total knowledge concerning this crucial issue of our time comes exclusively from Wikipedia.

This is tremendously evident in the comments sections at NewsBusters when virtually any time an article about global warming is posted, alarmists will cite information from Wikipedia to refute the veracity of the piece.

Certainly, this isn't to suggest that Wikipedia is not a valuable resource, and that all of its material is errant. However, as it specifically pertains to global warming -- and other issues to be sure -- the left-leaning bias of this website is clearly apparent, and the abuses by its editors to not only debase those they disagree with, but also prevent scientific information that contests their views to be included, makes this entity very dangerous.

This is especially the case as it seems a metaphysical certitude regardless of who's in the White House next year that Congress will once again be debating a carbon cap and trade bill to deal with global warming.

As the public is only getting one side of this debate from the mainstream media, the propaganda on display at Wikipedia could be enough to tip the scales in favor of legislation that could cripple the American economy.

Readers are encouraged to review Brent Bozell's "Wikipedia, Not Your Father's Encyclopedia."