AccuWeather Meteorologist Tells Obama to Can Gore as Environment Advisor 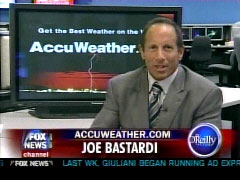 Although Joe Bastardi is likely not a household name, most Americans probably know his face as one of the meteorologists interviewed whenever a serious climate event like a hurricane hits the mainland.

This is especially true given Bastardi's suggestion that Obama "can [Gore] as an advisor on the environment."

Since green press members are almost guaranteed to boycott Bastardi's marvelous plea for some climate sanity, here are the highlights of his letter published Monday (emphasis added):

Mr Obama, can the [sic] Al Gore as an advisor on the environment. Mr. McCain, quit succumbing to pressure because you want to look nice or moderate. Both of you, get the people that can give this debate its true merit in front of you. Hillary, if you are elected, the same thing (you got to admit, she is showing some Lady Thatcher or Golda Meir spunk these days). But stop with watching people that aren't the main event.

Within the first 100 days of office, get the top five SCIENTISTS on both sides of the issue in front of you in the oval office and let them argue it out. No cameras, no press, just you, your closest advisors, and the people that are qualified to do this. Have trusted members of both sides of the aisles, but get the politics out of it.

The polar bear situation should push Americans over the edge. The long term population has increased. In addition, the cold this winter may simply be a preview of what is coming. That we are basically going to make it illegal to get oil, from an area that can perhaps help us get off foreign oil, because of yet another problem that may not exist, should be enough to clear the air and reveal that there are alot [sic] of people supporting this position that are not driven by the science, but what may be an almost fanatical madness, and that should resonate with people. Sir or Mam, if you are absolutely convinced, after seeing people who don't think polar bears are as important as the people you are elected to serve, that argue out the science, then commit the American people on a path that will basically spend their hard-earned money on a problem our chief rivals are probably simply paying lip service too, then I will support you. But if you have doubt, after clearing away the feelings and looking at the facts, then by proceeding you will put yourself in a rush to judgement before the facts are clear that has left many Americans disillusioned about our nation in other matters.

This is not a matter of politics, it is not a matter of feelings. It is a matter of science and facts and educated men squaring off and displaying their knowledge. A non-conclusive answer in this matter is no answer at all, and no mandate to perhaps send us on path that could affect the chance for the very people we should have the most compassion for, to improve their lot.

Can I get an "Amen" brothers and sisters?