As people that actually pay attention to weather are aware, the winter in the Northern Hemisphere this year is following the same pattern as last year's extraordinarily frigid conditions in the Southern Hemisphere.

In fact, all kinds of cold and snow-related records are occurring all over the supposedly warming planet this winter despite continued claims by climate alarmists that the world will come to an end if we all don't immediately reduce our emissions of that awful -- naturally occurring and necessary for most life on earth! -- gas, carbon dioxide.

Makes one wonder how climate alarmists will spin the winter of 2008 so as to keep alive their precious global warming myth. Fortunately, as NewsBusters has reported for many months, foreign press outlets are much more honest with their citizens than America's, as observed in this fabulous article in the Canadian National Post Monday (emphasis added throughout, h/t NBer Oscar Goldman):

Snow cover over North America and much of Siberia, Mongolia and China is greater than at any time since 1966.

The U.S. National Climatic Data Center (NCDC) reported that many American cities and towns suffered record cold temperatures in January and early February. According to the NCDC, the average temperature in January "was -0.3 F cooler than the 1901-2000 (20th century) average."

China is surviving its most brutal winter in a century. Temperatures in the normally balmy south were so low for so long that some middle-sized cities went days and even weeks without electricity because once power lines had toppled it was too cold or too icy to repair them.

Brrr. I'm getting cold just thinking about. But there's more:

And remember the Arctic Sea ice? The ice we were told so hysterically last fall had melted to its "lowest levels on record? Never mind that those records only date back as far as 1972 and that there is anthropological and geological evidence of much greater melts in the past.

The ice is back.

Gilles Langis, a senior forecaster with the Canadian Ice Service in Ottawa, says the Arctic winter has been so severe the ice has not only recovered, it is actually 10 to 20 cm thicker in many places than at this time last year.

I bet you hadn't heard that the ice in the Arctic has mysteriously returned. Why do you think that is?

Want to know what else has returned? The snow to Mt. Kilimanjaro: 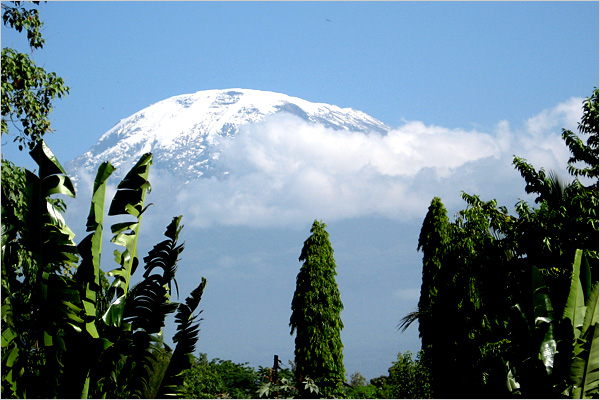 But media won't tell you about that, either.

Isn't it great having a "free press?"