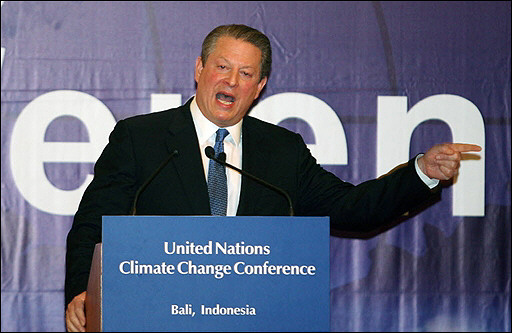 Although it's a metaphysical certitude American media will be jumping for joy about this event, United States citizens on both sides of the political aisle should be deeply embarrassed and ashamed about the disgraceful things former Vice President Al Gore said Thursday at the United Nations' climate change meeting in Bali.

It's one thing to make a movie based almost exclusively on junk science and well-documented falsehoods whilst traveling the world evoking hysteria you yourself are financially benefiting from.

However, it is something else altogether to attend an international meeting, with delegates from every country on the face of the planet present, and disparage the nation you used to serve (truly disgraceful video available here):

My own country, the United States is principally responsible for obstructing progress here in Bali. We all know that. But my country is not the only one that can take steps to ensure that we move forward from Bali with progress and with hope.

How about YOUR obstruction in 1997 when you were Vice President, Mr. Gore? Or have you forgotten (video available here): 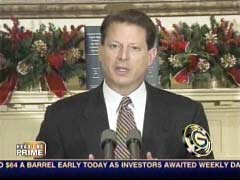 We will not submit this [the Kyoto Protocol] for ratification until there`s meaningful participation by key developing nations.

You've conveniently forgotten that, haven't you Mr. Gore? Isn't this EXACTLY the same position America is taking today in Bali?

Sadly, it also seems a metaphysical certitude that when media members across the fruited plain report on Gore's speech Thursday, they, too, will ignore where the Global Warmingist-in-Chief stood when he was the second most powerful person in our nation.

Mr. Gore, you should be ashamed of yourself for grandstanding this way on an international stage pointing your finger at your own country when the administration you served in had exactly the same political stance as the current one.

And any media outlet that chooses not to be truthful about this tonight and tomorrow should similarly be ashamed of itself not only for allowing this charlatan to get away with it, but also for aiding and abetting his charade.