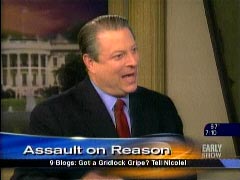 Is the press beginning to see through Al Gore's global warming scam?

A brief article posted at Newsweek's website offers hope that the media might finally be recognizing the former Vice President could be this decade's Ken Lay.

For those that have forgotten, Lay was the CEO of Enron (h/t NBer well99, emphasis added):

Since 2000, according to published reports, the former veep has transformed himself from a public servant with around $1 million in the bank to a sparkling private consultant with a net worth estimated to be north of $100 million. He's a senior adviser to Google, a board member at Apple and now a newly minted general partner at Kleiner Perkins Caufield & Byers, the Silicon Valley venture-capital firm that made billions investing early in Netscape, Amazon and Google.

Gore has pledged to hand over his KP "salary" to Alliance for Climate Protection, a nonprofit he chairs. But the gift is more symbolic than material. Gore's salary-his cut of the 2 percent "management fee" that KP partners get on all investments-is typically a sliver of the total compensation that VCs receive. If Gore's profit-sharing deal is anything like the firm's other 23 partners, he's also in line to collect tens of millions of dollars a year. That's because partners carve up 30 percent of the profits if and when the alternative-energy start-ups that KP supports go public or are sold. (Kleiner Perkins declined to comment on Gore's compensation, but his communications director, Kalee Kreider, confirmed that he plans to donate only his "guaranteed income" to charity.) Should Gore's prospecting unearth a clean-energy gold mine the size of Google-which earned billions for KP partners-his share of the loot could make him U.S. history's richest ex-veep.

Granted, this is just a blurb at Newsweek's website.

However, at some point, journalists have to start exploring the wealth that Gore is creating for himself while he tells regular citizens to walk to work in order to save the planet.

Is this the beginning?

Circumcision on Decline in Africa Due to Global Warming

Was Gore Hired as Venture Capitalist or Venture Lobbyist?