Al Gore Got a D in Natural Sciences at Harvard 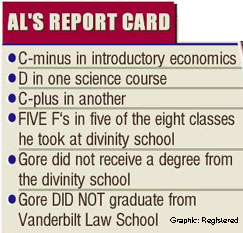 Want to know why Nobel Laureate Al Gore likely doesn't want to debate any of the myriad of scientists and politicians that have challenged him to such a tête-à-tête regarding his manmade global warming theories?

Could it possibly be because Gore was a terrible science student, and clearly never excelled at anything relating to what folks in Norway and in the media consider him to be so expert at?

The following was reported by the Washington Post on March 18, 2000 -- and conveniently ignored by media ever since Gore began lecturing the world about subjects he practically flunked as a student! -- in an article marvelously titled "Gore's Grades Belie Image of Studiousness" (h/t NBer dscott, and tangentially Greenie Watch):

For all of Gore's later fascination with science and technology, he often struggled academically in those subjects. The political champion of the natural world received that sophomore D in Natural Sciences 6 (Man's Place in Nature) and then got a C-plus in Natural Sciences 118 his senior year.

Yet, this is the man liberals and dolts in the media are willing to bet their very lives on when it comes to complex scientific issues surrounding meteorology and climatology. On a regular basis, such folk have the nerve to suggest that Gore is more knowledgeable when it comes to these matters than scientists who have spent their entire lives studying and educating others at the finest colleges and universities around the world.

In fact, when it comes to the more complicated sciences specifically involved in matters relating to the atmosphere and climate, Gore was practically a dunce:

When John C. Davis, a retired teacher and assistant headmaster at St. Albans, was recently shown his illustrious former pupil's college board achievement test scores, he inspected them closely with a magnifier and shook his head, chuckling quietly at the science results.

Think an expertise in chemistry and physics might come in handy to fully understand all the dynamics and variables involved with meteorology and climatology?

Maybe more important, should America rest its financial and economic future as it pertains to environmental policy on the shoulders of a man who demonstrated virtually no expertise in science whilst attending one of the world's finest facilities for higher learning?

And where are the media on this issue? As Gore travels around the country lecturing America about global warming, shouldn't the press point out how poorly the Nobel Laureate did in science while a college student?

Or is that asking too much?