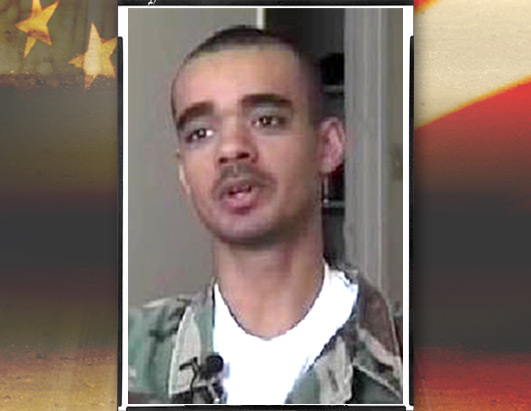 This is really hysterical, folks, and definitely requires all drinking vessels be properly stowed before continuing.

Just days before Rush Limbaugh was attacked by a number of press outlets for discussing "phony soldiers" on the air, ABC's Brian Ross did a segment on "World News with Charles Gibson" dealing with "phony heroes...scam artists...posing as the war heroes they never were, claiming credit for acts of courage in Iraq and Afghanistan."

Marvelously, this story was aired on Monday, September 24, just two days before Limbaugh made his comments. And, as noted in a NewsBusters posting by the MRC's Brent Baker, the report even mentioned the same "phony soldier," Jesse Macbeth (pictured to the right), that Limbaugh did on his program Wednesday.

Will media attack ABC with the same zeal they did Limbaugh? Maybe even more important, will House Democrats offer a resolution to condemn Ross, Gibson, and everyone involved in ABC's report?

While you ponder, what follows is a full transcript of this segment (video available here, h/t Rush Limbaugh.com):

CHARLES GIBSON, HOST: (Voiceover) 'A Closer Look" tonight at phony heroes. A famous recruiting slogan once touted the Army as a place to be all you can be. But increasingly, scam artists are posing as the war heroes they never were, claiming credit for acts of courage in Iraq and Afghanistan. Federal officials have launched a crackdown. Operation Stolen Valor they call it. Tonight, our Brian Ross investigates.

(Voiceover) At the Washington State Capitol in Olympia this year, a Marine Corps Color Guard included a Marine chaplain to deliver the opening prayer. But authorities later discovered that the Marine chaplain, Captain Reggie Buddle, was not a chaplain.

I think he went to seminary school and flunked out.

(Voiceover) Nor was a Buddle a captain, nor had he earned all the medals he wore. In fact, Buddle had never been in the Marines, even though he had officiated at numerous Marine weddings, baptisms and funerals.

It was devastating to the people who had relied on him.

(Voiceover) At a time when tens of thousands of US soldiers have put their lives on the line in Iraq and been honored for their sacrifice and courage, federal prosecutors have had to launch a crackdown on phony heroes.

They want something that they didn't earn. They didn't have the guts to go and do it themselves.

(Voiceover) Authorities say many of the phony heroes make up their stories, so they can get free treatment at veterans' hospitals.

They're taking money away that should be used for the deserving veterans.

(Voiceover) Most of the phonies are spotted by people who really earned their medals. In St Louis, this supposed Marine with a chest full of honors was turned in because he seemed too fat to be a real Marine. It turns out he never served a day in the Marines.

Once I was in Baghdad...

(Voiceover) But authorities say the most disturbing case involves this man, 23-year-old Jesse Macbeth. In a YouTube video seen around the world, Macbeth became a rallying point for anti-war groups, as he talked of the Purple Heart he received in Iraq and described how he and other US Army rangers killed innocent civilians at a Baghdad mosque.

Women and men, you know - while in their prayer, we started slaughtering them.

(Voiceover) It was a complete fabrication.

He was in for approximately six weeks and then he was discharged. I don't think he even completed basic training.

(Off-camera) Last week in federal court in Seattle, Macbeth offered an apology for defaming the real American heroes as he admitted to lying about his service record and his supposed atrocities, Charlie.

I'm verklempt. Talk amongst yourselves.

FYI: Interested readers must take a look at Brian Maloney's work on this subject. Frankly, he's been all over this story, and we at NB are very grateful.