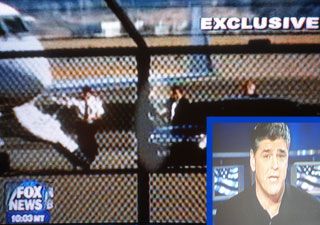 By now, most conservatives have likely seen or heard about the video Fox News's Sean Hannity aired on Sunday's "Hannity's America" wherein the Global Warmingist-in-Chief, soon-to-be-Dr. Al Gore, was seen getting off a private, fuel inefficient jet at San Francisco Airport before stepping into a non-hybrid, Lincoln Town Car.

This raises a question: Should we expect to see this video on CNN and MSNBC all day Monday, as well as on the morning and evening news programs of ABC, NBC, and CBS?

If the answer is "No," then why not? After all, as Redstate reported about this video Sunday (emphasis added, video available here):

Notably the average car emits .916 lbs. of CO2/ gallon vs. Al Gore's 21 lbs. of CO2/gallon in his jet. So for the amount of carbon and gasoline that Al Gore emitted, the average family could travel back and forth from Nashville to San Francisco in a Station Wagon 15 times. Again, they could do that 15 times just to equal Al Gores "damage to the Planet" in one day. Worst of all, Sean Hannity and Fox News found out that there were 112 commercial alternatives that Al Gore could have flown to reach that exact destination.

As such, while Gore is telling people all over the world that they need to drive less and buy hybrid cars or else our planet will face insurmountable consequences, why aren't media holding him to the same standards he's holding others?

Or, is only conservative hypocrisy considered newsworthy?