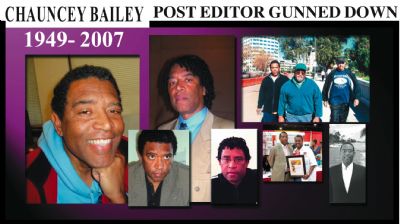 When a member of the journalism community is murdered, wouldn't you expect most news agencies to report it?

Well, on Thursday morning, Chauncey Bailey, the editor of the Oakland Post, was gunned down by an at that time unknown assailant.

Yet, ABC, CBS, and NBC haven't said a word about this shooting, or the connection to Your Black Muslim Bakery. Why?

Kudos go out to CNN for logging three reports on the matter Friday including this one during the 11AM EST "CNN Newsroom":

TONY HARRIS, ANCHOR: And quickly now, let's get to T.J. Holmes in the CNN NEWSROOM. T.J. is following a developing story of a raid in Oakland, California, of a bakery there.

A lot more now from affiliate KTVU that's doing some reporting there. But these are the pictures we were watching.

This is Your Black Muslim Bakery is the name of this place. It's a staple there in the community, been there a long time. Several locations, known for certainly some of their baked goods, but also it's a community outreach group that really has opened its doors over the years to struggling families.

So it's not just a bakery. There's more to this group.

Well, there was a raid this morning. Nineteen people now in custody, is what we know. But according to our affiliate, these 19 people are being detained, again, according to KTVU, because they believe they have connections to at least three homicides that have happened in the past month, as well as other types of various violent crimes.

Again, this is according to KTVU, our affiliate.

And so now you have these 19 people in custody, one of them being Yousef Bey IV, who is the son of the founder of Your Black Muslim Bakery.

Now, again, several municipalities have been involved in this raid, not just there in Oakland, but several around, according to the police chief there in Oakland. This was part of a yearlong investigation.

Now, again, they've been arrested, these 19, in connection with three homicides in the past month. One of them, according to KTVU, happens to be the murder we saw just yesterday of a local reporter, Chauncey Bailey. He was a long-time reporter there in the Bay area, was the editor of "The Oakland Post," was gunned down in the middle of the street yesterday by masked gunmen. According to KTVU, he was actually work on a story that had to do with Your Black Muslim Bakery.

So, these are the reports we're getting now from affiliate KTVU, getting a lot more details about this raid. We're trying to figure out why and what locations, but there were four locations in addition to Your Black Muslim Bakery. Four all together, including Your Black Muslim Bakery. But 19 people in custody in connection with some violent crimes, including three homicides in the past month. So we are getting more details. We are expecting, Tony, a 3:00 Pacific news conference. We'll hopefully get even more clarity about what exactly is going on.

But again, we saw that horrible, violent -- that murder of that "Oakland Post" editor, Chauncey Bailey, gunned down in the middle of the street by masked gunmen.

So a big raid here, a huge raid in the predawn hours. Nineteen people in custody right now. A lot more details to come in that press conference -- Tony.

HARRIS: T.J., thanks for the update.

Fox News' Greta Van Susteren also filed a lengthy report on this issue during Friday's "On The Record."

Yet, MSNBC, ABC, CBS, and NBC have all been mysteriously silent.

As a post script, a handyman for Your Black Muslim Bakery confessed to Bailey's shooting on Saturday. I wonder if these fine news organizations will ignore that as well.

*****Update: MRC's Brad Wilmouth informed me that NBC's "Today" show reported the Bailey shooting during the first half hour of Saturday's program. Closed caption dumps confirmed that this was a fairly comprehensive report similar to what CNN did on Friday.

We will be continuing to monitor the broadcast networks for subsequent reports, especially in the evening news programs.

*****Update II: The CBS "Evening News" and ABC's "World News Saturday" did nothing on this shooting Saturday. The caption dump for the NBC Nightly News is not yet available.