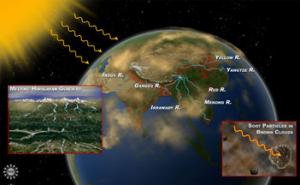 Scientists at the Scripps Institution of Oceanography at UC San Diego published a paper in the journal Nature Thursday which put a huge hole in the manmade global warming theory espoused by soon-to-be-Dr. Al Gore and the Intergovernmental Panel on Climate Change.

As reported by the Associated Press (emphasis added):

Huge haze clouds over the Indian Ocean contribute as much to atmospheric warming in Asia as greenhouse gases and play a significant role in the melting of the Himalayan glaciers, according to a study published Thursday.

Researchers concluded that the pollution - mostly caused by the burning of wood and plant matter for cooking in India and other South Asian countries - enhanced heating of the atmosphere by around 50 percent and contributed to about half of the temperature increases blamed in recent decades for the glacial retreat.

Obviously, this puts quite a crimp in the currently in vogue global warming myth that CO2 emissions are solely responsible for glacial melt. Furthermore, JunkScience.com's Steven Milloy pointed out Thursday a conceivably less intuitive chink in the armor (emphasis added):

Global warming alarmism is rooted in the idea that ever-increasing manmade emissions of greenhouse gases, primarily carbon dioxide, cause global temperatures to warm. This idea, however, doesn't match up very well against real-world observations.

During the 20th century, for example, while manmade carbon dioxide emissions steadily increased from about 1940 to 1975, global temperatures cooled.

Global warming alarmists, such as the UN's Intergovernmental Panel on Climate Change (IPCC), try to counter this observation by claiming that aerosol particles in the atmosphere - like soot and sulfates from fossil fuel combustion, and dust from volcanic eruptions - can mask the warming effect of greenhouse gases and cool the planet by reflecting solar radiation back into space.

As such, not only are these airborne particles likely a key to glacial melt, the fact that they can warm rather than cool the atmosphere refutes the IPCC's explanation as to why global temperatures declined from 1940 to 1975 as CO2 levels rose.

Talk about your inconvenient truths!

The primary culprit seems to be the black carbon in soot, which soaks up any sunlight it can, thereby warming whatever it touches. And the dominant source for all this black carbon is cooking fires, [Scripps climatologist Veerabhadran] Ramanathan says. All these cooking fires are, in effect, drying the region, both by contributing to the melting of glaciers that feed Asia's major rivers as well as by decreasing the evaporation that drives rainfall. Aerosols across the board, from black carbon to sulfates, appear to be increasing across Asia as it industrializes.

Wonderfully, the solution is likely much simpler than trying to reduce CO2 emissions, and doesn't require raising taxes or destroying economies:

But the problem can be solved by swapping other fuels and methods for the wood in cooking fires. "The aerosol lifetime is two weeks," Ramanathan says. "If the world pays attention and puts resources to it, we will see an effect immediately. I'm talking weeks, at most a few months, not decades or centuries."

That contrasts with solutions for CO2 emissions, which will require much longer periods to show effects. Because the brown cloud appears to be at least as important, eliminating it could buy time to implement more far-reaching solutions before catastrophic glacial melt and other climate change impacts occur, Ramanathan argues.

And, Ramanathan is willing to put his money where his mouth is:

Ramanathan and colleagues plan to demonstrate this on a small scale over the next few years in the Himalayas, over a 12-square-mile area in the foothills. "We want to create a black carbon hole," he says.

So, assuming they're right, and their plan works, we might in the end find - as many scientists believe despite protestations from the global warming alarmists - that CO2 has much less to do with climate change than currently being espoused by those with a political agenda.

Think Katie, Charlie, or Brian will be reporting this tonight?