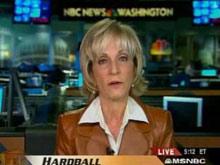 Andrea Mitchell and Chris Matthews orchestrated a rather obvious flip-flop Monday of a controversial statement the former made on the “Chris Matthews Show” the day before.

In a nutshell, Matthews’ Sunday panel was discussing the politics of Iraq. During several instances, Mitchell stated that Gen. David Petraeus had recently had a private meeting with the Republican caucus promising progress in the embattled nation by August.

They'll [the Republicans] stick until September, and then they'll leave. I believe very firmly that they're against what he is doing, but they feel that General Petraeus has persuaded them that, for all intents and purposes, they can't vote a withdrawal before September.

Excuse me, Chris, but Petraeus went to the Republican caucus and told them, `I will have real progress to you by August.' They told him, `We'll stick with you...'

These revelations were compelling enough for Joan Walsh to write about at Salon on Sunday (emphasis added throughout):

It's Sunday, so the story may not be reported out until Monday, but there are several mini-scoops hiding in Mitchell's story, and they're worth breaking down. First, did the war commander really meet alone with Republican senators, and if so, why? Democrats are dying in Iraq, too; we hear all the time that this shouldn't be a partisan debate. Party caucuses mainly exist to hammer out positions on legislation, eliminate or manage internal dissent and rivalry, and frame issues for the best political spin. Why was the busy Petraeus at a caucus event helping Republicans?

Yet, the following day, on “Hardball,” in the middle of a discussion about presidential candidates, this happened:

MATTHEWS:  What is Petraeus, General Petraeus saying over there about what‘s he been telling people about that?

MITCHELL:  Well, it‘s a good thing you bring that out.  He‘s been telling senators—he had, in fact, a closed-circuit briefing for the senators, Democrats as well as Republicans, and he is telling them that he will report some progress, that he hopes to be able to report some progress by August.  And in turn, what many Republican senators are saying, Chris, is that if there isn‘t real progress by the end of the summer, that‘s when there are going to really break with the president, that they‘re going along with this surge out of respect for the generals.  But in his closed briefing—they went over to the Pentagon and had that briefing, Democrats as well as Republican senators, and he made it clear to them that he thinks he can report some progress.

What a difference a day makes, huh? Even Joan Walsh smelled a rat, as she reported Monday:

Monday on "Hardball," in a segment that was actually about the fundraising totals of the 2008 presidential contenders and the troubles of Sen. John McCain, Matthews and Mitchell seemed to correct the record, sort of. Without mentioning what had been discussed on Sunday, Matthews asked Mitchell, rather out of the blue, to talk about what Petraeus was telling senators. "It's a good thing you bring that up," Mitchell replied, and she went on to say that Petraeus recently held a "closed circuit briefing" for senators of both parties, "Democrats as well as Republicans."

Got it? It seems Petraeus didn't meet alone with Republicans, and I apologize for my role in passing that along (but it would be nice to also hear an apology from Mitchell and Matthews).

What follows is a partial transcript of the segment in question from Sunday’s “Chris Matthews Show.”

First up, this week, a watershed moment in the four-year-old war in Iraq. On one side, the president's determined. Here's his commander in Iraq, General David Petraeus, upbeat on the surge strategy.

General DAVID PETRAEUS: (March 9) I think we're doing a bit of this right now. The short answer would be, we are making progress and that we will make more progress as more forces and more resources arrive to do that.

MATTHEWS: But on the other side, public opinion. In the latest Gallup poll, 60 percent of voters want to set a date for withdrawal of all US troops. The House and Senate have heard the message, and this week a real landmark. They sent George Bush a bill forcing troops to get out next year, a bill the president's pledged to veto. The military knows the clock is ticking. On Monday, central command chief Admiral William Fallon said it's now or never.

Admiral WILLIAM FALLON: (From ABC's "World News with Charles Gibson"/Monday) Time is of the essence. It's now, now, now. I just don't believe we're going to have an opportunity, given the debate in Congress it's going to be very difficult to be able to come back and say we got this wrong and we need another chance.

MATTHEWS: Joe, there are three options out there right now. One, this surge shows progress and the president gets a new mandate to continue the war. Two, the stalemate, the one we have right now. The president can veto right now any troop withdrawal. Or three, pressure builds, Republicans defect and Congress tries to force another withdrawal. Joe, which is it going to be?

MATTHEWS: The rosy scenario. Will the surge work?

Mr. KLEIN: I don't know about the rosy scenario. Baghdad is a little bit quieter now, mostly because the Shiite militias have stood down; they're not fighting. But if we really want to see the future, look what happened in Tal Afar this week. That was a city, the last place where serious counterinsurgency tactics were tried by us and we left. This week there were massive car bombs and then a Shiite massacre of Sunnis. You know, you need years and years for counterinsurgency tactics to work. General Petraeus says it. We don't have years and years.

MATTHEWS: Andrea, same question. Are we on that rosy scenario, the surge working; are we headed to the stalemate we have now, endless back and forth, or will the Republicans crack in their support for the president?

MITCHELL: If it doesn't work, they're running.

MATTHEWS: Andrew, let's talk about the stalemate period we're in right now. We look at the Constitution. It's at work. It takes two thirds to overwrite a veto. Two thirds plus one. The Democrats clearly don't have it. What happens for the next several months? Are we going to have this back and forth?

Mr. ANDREW SULLIVAN (The Atlantic): I think we have a stalemate, because I--and the reason I say that is because I just don't think it's in Bush's character inability and mind-set to be able to say, `OK.' I mean, he is fighting this war existentially. He thinks he's on the side of absolute good against absolute evil, and anything that he does to surrender is surrender. And--so he's the brittle one. He won't change. The question is whether he'll be forced to break. But will a country want to see its commander in chief be broken in the saddle? And I don't think so. I actually think Bush--I personally think he's going to carry on the stalemate until 2008.

Ms. JANINE ZACHARIA (Bloomberg): But the question is, isn't anybody going to compromise and say, `It's OK to set benchmarks in the language, instead of saying you must be out by September '08.' There's going to be a lot of wiggle room for the next few months. People are telling me, this doesn't have to be resolved, as Andrea said, until the summer. They can keep moving money.

MATTHEWS: OK, let's assume that people watching right now fall into two categories. They want this war to end faster than the president wants it to end or they're with him. What good are benchmarks in that debate?

Ms. ZACHARIA: Well, at least it sort of gets the Iraqis--I mean, people were talking about politics in Washington, but what the Iraqis need to know and what Admiral Fallon was telling the Iraqis is that there's no patience here in Washington. You must be making some concrete progress or we're out of here. He himself told me in an interview that he says he's telling them we need time lines. They just don't want it written in the legislation.

MATTHEWS: All right, what about this legislation they're talking about? The Globe broke it late this week...

MATTHEWS: ...that we'll be--the Congress will say, `OK, the president can veto any bill that--he can get his spending, but we're going to make it every month.' Like, they're going to put him, put ankle bracelets on the president to basically say...

Mr. KLEIN: Every three months they're...

MATTHEWS: OK, but these are periodic check backs, and which gives the Congress a leash on the president.

MITCHELL: Well, the Democrats think that they do have the ability now to pull that off. They've got the votes, and force him to veto it and come back to them. But they don't want to be in a position of being told that they are keeping the money away from the troops, so this way that they can dole it out month by month, they think that they are in the driver's seat.

MATTHEWS: OK, moving ahead to the question about how the Republicans are behaving. We know the Democrats are against the war, we know the president's for it. One Republican, John McCain, is joined at the hip to President Bush on the war, we all know that. McCain this week seemed a little less than thrilled when he was asked how long he's willing to wait for this surge over in Iraq to work.

Senator JOHN McCAIN: (Wednesday) We will know in some months ahead in many ways, but, look, the only guarantee of failure is to tell the enemy, `Hey, hang on, we're leaving.'

MATTHEWS: We put it to the Matthews Meter, 12 of our regular panelists: Will Republicans stick with President Bush on the war until the fall? Eight say no, Republicans won't stick with the president till September, four say they will. Andrea, you say they won't not stick.

MITCHELL: They'll stick until September, and then they'll leave. I believe very firmly that they're against what he is doing, but they feel that General Petraeus has persuaded them that, for all intents and purposes, they can't vote a withdrawal before September.

MATTHEWS: Andrew, you say they don't stick even through the summer.

Mr. SULLIVAN: I think that, generally speaking, Republicans are not going to undercut a commander in chief in wartime. Period.

MATTHEWS: So they all--does everybody agree?

Mr. SULLIVAN: Unless, Chris, there is complete meltdown over there. I mean, if Iraq really does melt down...

MATTHEWS: Oh, actually--I'm talking about the way conditions are and the violence stuff that we read about. We lost 100 people the other day over there to violence. The Shia...

Mr. KLEIN: ...there has been a really unfair time line set. Petraeus has said you can't cut it off in August, but everybody's looking to August. And I think...

MATTHEWS: Well, because the term `six months' got into the air.

Mr. KLEIN: Either those six months--it is absolutely...

MATTHEWS: Who came up with that? The president did, didn't he?

Mr. KLEIN: The president did, Condi did, and especially George Casey, who doesn't like Petraeus very much did.

MITCHELL: Excuse me, Chris, but Petraeus went to the Republican caucus and told them, `I will have real progress to you by August.' They told him, `We'll stick with you...'

MATTHEWS: I agree to disagree.

MATTHEWS: But the country--the country was led to believe that a--by the way, the nature of a surge, the word itself is an escalation.

MATTHEWS: It's just a short term upgrade of the effort.

Mr. KLEIN: Counterinsurgency tactics are not a surge, they're a glacier that takes years...

MATTHEWS: Andrea, we got the label surge from the president himself.

Mr. KLEIN: What--but this is--the important thing is that this isn't going to work.

MITCHELL: ...that they're--that they will pull the plug.