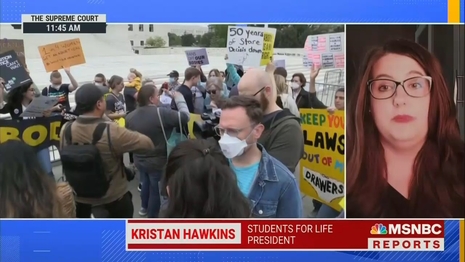 On Friday's episode of the NewsBusters Podcast, Curtis Houck and I were joined by special guest Kristan Hawkins, the president of Students for Life. Together we discuss the ghoulish arguments against the pro-life movement and dispel them. We examined the nonsense from the insufferable cast of The View, such as Whoopi Goldberg claiming “it doesn’t matter” when an unborn child gets their rights. And we looked at how the pro-life movement has been energized by the possible overturning of Roe v. Wade and prepared for a post-Roe world.

Beforehand, we review how The View thinks the rights of the unborn don’t matter and how people are paying too much attention to pesky things like inflation and the price of gas. Basically, they’re telling people to stop being poor.

We also dispelled the false liberal notion that conservatives don’t care about the mothers and babies after they’re born. I discuss my family’s personal connection to Joseph’s House for Women, which we’ve been donating to for generations. At Joseph’s House, they “promote the sanctity of life and the dignity of women by providing a nurturing home for mothers facing an unplanned pregnancy and homelessness.”

Finally, in our interview, we asked Hawkins about how the possible overturning of Roe v. Wade has helped energize Students for Life and the broader pro-life movement. And we talked about her willingness to go on liberal media outlets and confront them with the message and principles of the pro-life movement, including the fact that most Americans want some form of limitation on abortions.