Out to Mislead: Media Spew Inflated Mass Shootings Stat for 2022 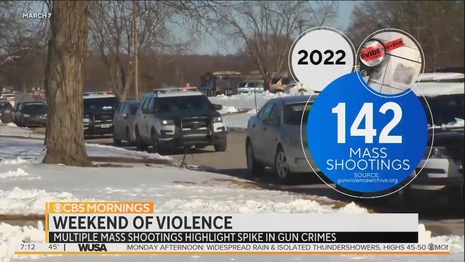 Following a weekend of multiple “mass shootings,” the liberal media rushed to exploit the dead to push their demands for increasingly-unpopular gun control legislation. Part of their efforts to scare people into giving up their Second Amendment rights was to parrot a dubious analysis that claimed there have been between 130-148 mass shootings so far this year.

So, it begs the question: if there really were that many, why have only a fraction of them been reported on nationally? The simplest explanation is there haven’t been that many mass shootings and they’re being inflated to make things seem more horrendous than they really are.

When reports of a “mass shooting” break, the common understanding is that a person went to a public place (school, shopping center, est.) and started shooting indiscriminately with the intent to kill as many as possible. But what the liberal media are currently citing is data from the Gun Violence Archive, a supposed “independent” aggregator of incidents involving guns.

“And as the overall number of shootings have increased, there's been a dramatic rise in mass shootings,” reported ABC’s Pierre Thomas on Monday’s Good Morning America. “Look at these numbers. According to the Gun Violence Archive, there were 417 mass shootings in 2019. By last year the number spiked to 693. That's an incredible 66 percent jump.”

“We're now in an era where we can say mass shootings are chronic, sustained, and sadly routine,” he added with a graphic that claimed there have been 139 so far this year.

According to their website, the Gun Violence Archive (GVA), uses this peculiar definition of “mass shooting” for their methodology: “FOUR or more shot and/or killed in a single event [incident], at the same general time and location  not including the shooter.”

Last year, Northeastern University’s James Alan Fox, a mass killings researcher of over 40 years and who maintains a database for the Associated Press and USA Today, said the data GVA puts out is “confusing to people.” He explained the group took the definition of mass killing, which at the time only counted the dead, and decided to throw in the wounded as well. Breaking down the GVA’s numbers, Fox noted: “On average, there’s one person killed per case. Like half of the cases, no one gets killed. And three-quarters, it’s either none or one.” 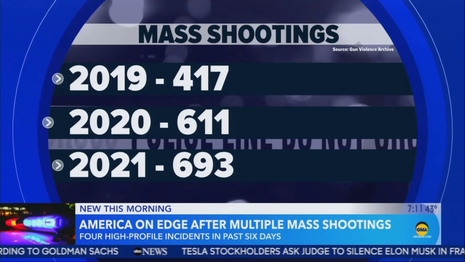 “And there has been some increase but marginal,” he said of the total number of incidents. “The kind of shootings that people really think about the public massacres – on average, there are about a half-dozen a year. In 2018, there were 10. And in 2019, I believe there were nine … in a population of 330 million people, you certainly can’t call the actions of 9 or 10 people an epidemic. It’s still a rare event.”

Adding: “Juxtapose that with the fact that ‘oh, there’s over 600 mass shootings last year,’ according to the Gun Violence Archive, that’s where people get the exaggerated view of the risk.”

Now let’s look at GVA’s methodology again. They admit that they intentionally strip out context from the numbers they gather:

Our definition of gun violence is intended to be fully inclusionary of disparate elements of gun related incidents...in that, all types of shootings are included, whether OIS, accidental, children shooting themselves, murders, armed robberies, familicide, mass shootings, DGU, Home Invasions, drivebys and everything else.

“Only by being totally inclusionary in our definitions is our data accurate, allowing the researcher to decide which parts of the complete dataset they need for their work,” they add, which obviously is useful to the anti-gun leftists that are willing to lie to get their way. 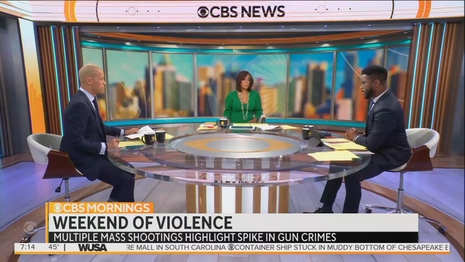 NewsBusters reached out to the founder of The Reload, Stephen Gutowski to get an understanding of where this definition of “mass shooting” GVA uses came from. He says it was “popularized by gun-control activists on Reddit” and it “increases the number of mass shootings by a factor of ten or more.”

“It can also be misleading for most readers since many of the mass shootings are not similar to high-profile shootings like Sandy Hook, Las Vegas, or Parkland,” he warned.

On Monday’s CBS Mornings, they blamed the rise in gun violence on the increase in gun sales during the pandemic. But Gutowski told NewsBusters he doesn’t buy that explanation because most of the guns recovered weren’t sold in the last two years:

However, correlation isn't causation and there isn't much evidence one is causing the other. For one, we determine gun sales by tracking the background checks people pass to buy firearms. That implies the surge in gun sales has been among those who don't have a serious criminal record. Additionally, ATF trace data indicates most guns recovered at crime scenes are years old. While time-to-crime did decrease last year, it remains very high.

As NewsBusters had documented a little over a year ago, NBC reported conflicting mass shooting numbers. In 2018, they claimed there were 307 shootings at the time of the report in early November. But in their 2021 report, they said there had only been 114 since 1999. We also caught CNN trying to inflate school shooting statistics back in 2018, including accidental discharges during police-led training exercises on school grounds on the weekend.