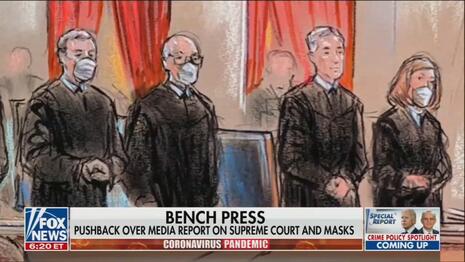 NPR Legal Affairs correspondent Nina Totenberg gave us yet another reason to defund the government-financed radio station on Tuesday when she published some fake news suggesting Justice Neil Gorsuch was spitefully rejecting pleas from Chief Justice John Roberts and Justice Sonia Sotomayor to wear a mask, as the latter is diabetic. But Fox News chief legal correspondent Shannon Bream busted the accusation with her own insider source that says it’s false.

Noting “Sotomayor did not feel safe in close proximity to people who were unmasked,” Totenberg suggested her sources told her “Chief Justice John Roberts, understanding that, in some form asked the other justices to mask up.”

“They all did. Except Gorsuch, who, as it happens, sits next to Sotomayor on the bench,” she wrote, going on to argue that he’s the reason Sotomayor was working remotely from her office. “His continued refusal since then has also meant that Sotomayor has not attended the justices' weekly conference in person, joining instead by telephone.”

She then took to hyping gossip to portray Gorsuch as some sort of black sheep in the highest court in the land, irritating everyone around him (click “expand”):

Gorsuch, from the beginning of his tenure, has proved a prickly justice, not exactly beloved even by his conservative soulmates on the court.

At his first sitting in 2017, he sought to dominate the argument and repeatedly suggested that a complex case, involving conflicting provisions, was really very simple.

"Wouldn't it be easier if we just followed the plain text of the statute?" he asked over and over. "What am I missing?"

A lot, said his colleagues, both liberal and conservative.

But, as it turns out, what she was claiming about the supposed masking feud wasn’t true according to Bream’s inside source. “I am told that is not accurate,” she pointedly shot down Totenberg’s claims after giving a fair summary of the report.

According to Bream’s source, “there has been no blanket admonition or request from Chief Justice Roberts that the other Justices begin wearing masks to arguments. The source further stated Justice Sotomayor did not make any such request to Justice Gorsuch.”

Thus, “given that fact, there was also no refusal by Justice Gorsuch.”

Bream concluded by pointing out that every justice is vaccinated, boosted, and that they get tested before gathering for arguments.

In all, Totenberg’s piece was filled with palace intrigue and her fears of the conservative justices. In the section ominously titled “Conservatives are united on hot-button issues,” she warns “In recent decades, the court has built its legitimacy on a certain degree of moderation … But now ‘the current conservative majority is on the cusp of ending that game’” (quoting Harvard law professor Noah Feldman).

Feldman also gave her the money quote that “The conservatives are playing with fire.”

BRET BAIER: You know, Shannon, there is another mask story at the Supreme Court grabbing headlines about a dispute apparently over the justices wearing or not wearing masks. What have you been able to find out?

SHANNON BREAM: Okay. So, NPR published this story, Bret, saying that Justice Sotomayor, who has diabetes and has regularly been wearing a mask on the bench during arguments, expressed that she, quote, “Did not feel safe in close proximity to people who were unmasked.”

The story goes on to say, “Chief Justice John Roberts, understanding that, in some form asked the other Justices to mask up.” It then says that Justice Gorsuch who normally sits right next to Sotomayor on the bench has repeatedly refused to do so and that’s forced Justice Sotomayor to operate remotely from her office for arguments and conferences.  I am told that is not accurate.

A source at the Supreme Court says there has been no blanket admonition or request from Chief Justice Roberts that the other Justices begin wearing masks to arguments. The source further stated Justice Sotomayor did not make any such request to Justice Gorsuch. I'm told, given that fact, there was also no refusal by Justice Gorsuch.

The Justices are all vaccinated and boosted and they do test before taking the bench for arguments. Bret.

BAIER: There you go. Straight in and out for us. We will see you tonight, Shannon. Thanks.