USA Today Bemoans 'What the Public Keeps Getting Wrong About Pedophilia'

In a now-deleted Twitter thread (but partially preserved by NewsBusters managing editor Curtis Houck) posted Tuesday, USA Today’s Life section drew outrage over a piece originally titled “What the public keeps getting wrong about pedophilia.” The just response from a disgusted public caused them to pull the thread, remove the paywall they initially hid it behind, and stealth edit the headline.

“A previous thread did not include all information and the story it was written about is behind a paywall. We made the decision to delete the thread,” the paper asserted in a tweet. Adding in a second: “The initial thread lacked the context that was within the story and we made the decision the pull down the entire thread.”

Ah, yes. Here we go with the liberal media celebrating and trying to normalize pedophilia.

With the new, stealth-edited, headline reading “The complicated research behind pedophilia,” author Alia E. Dastagir begins by lamenting about how “Pedophilia is viewed as among the most horrifying social ills. But scientists who study the sexual disorder say it is also among the most misunderstood.”

That was immediately followed up with Dastagir griping about how pedophilia is “synonymous with child sexual abuse,” suggesting it’s “a pervasive social problem that has exploded to crisis levels online.”

Following a breakdown of studies and findings of the research, the paper moved on to whining about “The controversy over 'destigmatizing pedophilia.'” The paper reminded readers of a case last November where disgraced former Old Dominion University academic Allyn Walker had to resign after drawing similar just outrage from the public:

An academic at Old Dominion University in Norfolk, Virginia, who talked about “destigmatizing pedophilia” and referred to pedophiles as "minor-attracted people" resigned in November following outcry over the phrase. Allyn Walker argued destigmatizing the attraction would allow more people to seek help and ultimately prevent child sexual abuse.

“There is growing support in the field for Walker's point of view,” Dastagir added as if that meant something meaningful in the real world. 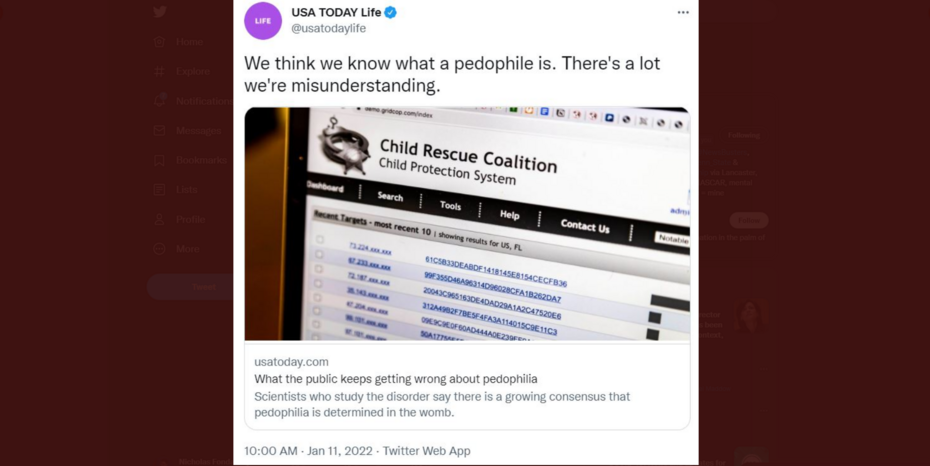 She cited the work of clinical psychologist James Cantor to argue that while “there's no treatment that can turn a pedophile into a non-pedophile, pedophiles can be taught self-control and compensatory strategies, which he said is more likely if they're under the care of a professional.”

This is essentially like pulling the pin on a grenade and holding down the safety; eventually, the hand will get tired or there could be a malfunction in the mechanism.

And judging from his statements, Cantor is very pro-pedophile. “Where do you want the person? Therapy is where he should be going, and all we've done is make it very, very difficult for a pedophile to get that,” he said to the paper.

In reality, nothing is stopping a person feeling those disgusting urges from getting help. It can be argued the stigma and fear of punishment are what keeps many would-be abusers from committing the act. And “destigmatizing” is a step toward normalization.

The only time the piece made sense was when they cited psychologist Anna Salter, who made the point that pedophiles are NOT “being punished unfairly.” “It's a choice to act on child molestation,” she said, going on to suggest they shouldn’t be coddled.

Although she did try to claim the sexual thoughts of normal people were similar to those of pedophiles.