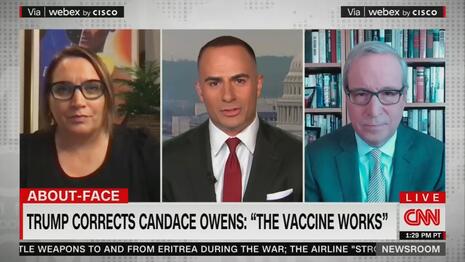 China is responsible for every American Covid death. But if you’re going to try to parse out blame to a particular president, at least get the simple math right. On Christmas Eve, CNN Newsroom fill-in host Boris Sanchez had some trouble doing that as he definitively claimed it was “fake news” to accurately say that more Americans have been killed by Covid under President Biden than former President Trump.

Sanchez’s false declaration came as a knee-jerk reaction to defend Biden from The Daily Wire’s Candace Owens, who made the accurate statement while interviewing Trump on December 21 (where he defended the effectiveness and safety of the vaccines):

TRUMP: All are very, very good. Came up with three of them in less than nine months. It was supposed to take 5 to 12 years.

OWENS: And yet, more people have died under Covid this year, by the way, under Joe Biden.

“Point of fact, that statement she made about people dying under Donald Trump versus Joe Biden, those numbers are completely wrong, so that's fake news right there,” he swiftly proclaimed following the soundbite.

Now, the argument can be made that it’s unfair to compare numbers because neither is responsible for the pandemic and Biden was a new president so his number could only go up. But Sanchez argued that “those numbers are completely wrong” (though no numbers were presented in the clip), thus his argument was about math.

So let’s take a look at that.

According to The New York Times, as of Christmas, there were 814,891 Covid deaths in the U.S. And The Washington Post has deaths under Trump at 402,269. With some simple subtraction, we see there are 412,622 deaths under Biden.

But to be kind to Sanchez a little bit, his comments were on Christmas Eve. The Times has the daily average deaths on Christmas at 1,345. If we double that to count for December 24 and do the simple math again: 412,622 minus 2,690 puts Biden's deaths at 409,932 at the time his comments aired. He’s still wrong.

And If we wanted to be extremely generous, we can play Devil's advocate and say he meant the numbers at the time Owen's made her comment, a few days before his. So, if we multiply the death rate by 5 (6,725) and subtract from Biden, it puts him at 405,897. Still wrong.

That last equation was very much in Sanchez’s favor. The death rate has increased slowly over those days so our use of the Christmas death rate had those rough numbers going his way.

But see how morbid all this death counting is, all for a measuring contest? One might say CNN could do better, but who are we kidding? This is CNN.

CNN’s gross body counting and grossly inaccurate math was made possible because of lucrative sponsorships from Carvana and Verizon. Their contact information is linked so you can tell them about the biased news they fund.

DONALD TRUMP: All are very, very good. Came up with three of them in less than nine months. It was supposed to take 5 to 12 years.

CANDANCE OWENS: And yet, more people have died under Covid this year, by the way, under Joe Biden.

OWENS: Than under you and more people took the vaccine this year so people are questioning how --

BORIS SANCHEZ: Point of fact, that statement she made about people dying under Donald Trump versus Joe Biden, those numbers are completely wrong, so that's fake news right there.

Secondly, it's very juicy because Candice Owen has been peddling nonsense – anti-vaccine nonsense online and to watch her face as the former President essentially says what we know that vaccines are effective; quite soothing. Ron, why is the former President taking this stance now, though? What is up with the timing?

RON BROWNSTEIN: Right. Well, look, I mean, it's never too late to do the right thing, but the former President waited until the concrete had really hardened among his base and the Republican coalition more broadly.

Look, I think the President – the former President is making what is a pretty obvious political pivot that he wants to take credit for the original development of the vaccines which he can. And I think he is putting himself in a position to argue at some point down the road that we gave the Biden administration everything we needed to handle this and then they fumbled the ball.

In fact, I think you can argue that it is highly unlikely that we would see 240 million separate people have gotten at least one shot. That required a big mobilization of every asset the federal government has. An aggressive use of federal power. It’s hard to imagine we'd have seen anything like that under a Trump presidency.