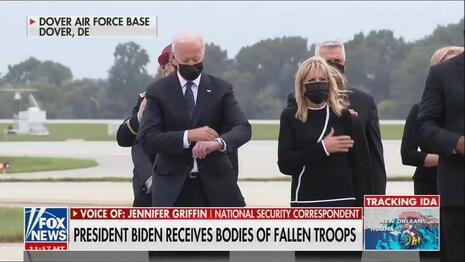 As NewsBusters reported earlier this week, Gold Star fathers of two of the Marines killing at the Kabul airport during the Afghanistan evacuation spoke out against President Biden in outrage of him disrespecting their sons and looking at his watch during the dignified transfer. Well, on Wednesday, a Biden sycophant at USA Today named Daniel Funke decided he was going to try to drag those grieving families through the mud with a so-called “fact-check” about their story, but he was forced to retract his smear the very next day after it was proven false.

“New fact check: A viral photo makes it look like President Biden checked his watch during a ceremony honoring U.S. service members killed in Kabul. But that's misleading,” Funke proclaimed in a tweet. Adding in another: “The way Biden honored the 11 caskets presented at Dover Air Force Base on Sunday was similar to how Trump paid respects to fallen service members during his presidency[.]”

He would also claim that the only time Biden checked his watch was AFTER the ceremony and never during it.

“Footage from the 45-minute ceremony shows Biden bowing his head and placing his hand over his heart as 11 caskets are carried off a plane and into gray vans,” he wrote in the supposed fact-check. “A video from C-SPAN shows Biden checking his watch once, near the end of the dignified transfer ceremony.”

The way Biden honored the 11 caskets presented at Dover Air Force Base on Sunday was similar to how Trump paid respects to fallen service members during his presidency https://t.co/F6bjQFYVbC

His initial designation was that the claims Biden had disrespectfully looked at his watch multiple times were “partly false.” But yet, the next day, USA Today was forced to issue a correction in the face of overwhelming evince they were lying. Of course, they only issued a half-hearted revision, suggesting the claims were “missing context”:

Corrections & Clarifications: This story was updated Sept. 2 to note that Biden checked his watch multiple times at the dignified transfer event, including during the ceremony itself. The rating on this claim has been changed from partly false to missing context.

Meanwhile, the piece still tried to portray those Gold Star families as liars:

"As my son and the rest of our fallen heroes were being taken off the plane yesterday I watched you disrespect us all five different times by checking your watch," Shana Chappell, mother of Marine Lance Cpl. Kareem Nikoui, wrote in an Aug. 30 Facebook post.

“USA TODAY was unable to independently verify exactly how many times Biden looked at his watch,” Funke asserted.

Instead of trying to sully Gold Star families, Funke should have been fact-checking Biden himself as Fox News Channel White House correspondent Peter Doocy did on Thursday’s Special Report, calling out Biden’s Afghanistan lies (Click “expand”):

BIDEN: I have seen no question of our credibility from our allies around the world.

DOOCY: Yet, criticism was heard, including in the British parliament where one MP took major issue with the U.S. President criticizing the Afghan army.

TOM TUGENDHAT (British parliament member): To see their commander-in-chief call into question the courage of men I fought with, to claim that they ran, shameful.

More of Doocy’s fact-checks are in the transcript below.

BRET BAIER: President Biden facing increasing criticism tonight, for what some critics say is clearly a broken promise about getting Americans and thousands of Afghans who helped America out of Afghanistan. White House correspondent Peter Doocy looks at the controversy tonight.

PETER DOOCY: Afghanistan policy has not played out as advertised.

PRESIDENT JOE BIDEN: If there is American citizens left we’re going to stay until we get them all out.

BIDEN: 90 percent of Americans in Afghanistan who wanted to leave were able to leave.

DOOCY: So, even though the administration initially claimed.

PRESS SEC. JEN PSAKI: It's irresponsible to say Americans are stranded. They are not.

JOHN KIRBY (Pentagon spokesman): We have Americans that get stranded in countries all the time.

DOOCY: Then there are knows who helped the U.S. in wartime.

GEORGE STEPHANOPOULOS (ABC): How about our Afghan allies, does the commitment hold for them as well?

BIDEN: The commitment holds to get everyone out that in fact we can get out and everyone who should come out.

DOOCY: That didn’t happen either.

PSAKI: Are there more people that want to leave Afghanistan? Absolutely.

DOOCY: Early on, the President was confident in thinks plan.

BIDEN: The likelihood there is going to be the Taliban overrunning everything and owning the whole country is highly unlikely.

BIDEN: Afghanistan political leaders gave up and fled the country. The Afghan military collapsed. Some time without trying to fight.

BIDEN: I have seen no question of our credibility from our allies around the world.

DOOCY: Yet, criticism was heard, including in the British parliament where one MP took major issue with the U.S. President criticizing the Afghan army.

TOM TUGENDHAT (British parliament member): To see their commander-in-chief call into question the courage of men I fought with, to claim that they ran, shameful.

DOOCY: However, this President stands by the way he ordered the withdrawal.

BIDEN: I give my word with all of my heart, I believe this is the right decision, a wise decision, and the best decision for America.

DOOCY: As a candidate, President Biden once claimed that if he won other countries would have reason to trust and respect the word of an American president again. But so far, on foreign policy, his word and the way things have gone have been different. Bret?