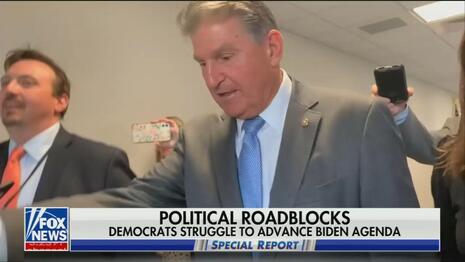 For the past couple of days, moderate Democratic Senators Joe Manchin of West Virginia and Kyrsten Sinema of Arizona were experiencing the full wrath of the far-left wing of their party after the pair refused to do away with the filibuster and pass the deceptively titled “For the People Act.” But the same evening newscasts that were obsessed with stoking the so-called “Civil War” in the Republican Party couldn’t be bothered to report on the chasm on the left.

As a NewsBusters study discovered back in May, over a two-week period, the evening newscasts of ABC, CBS, and NBC spent a total of 32 minutes and 53 seconds going on about Congresswoman Liz Cheney (WY) getting ousted from Republican leadership in the House. That’s not to mention how they spent the Trump years relishing the infighting and promoting the Never Trumpers.

Now, on Tuesday, doing what the liberal networks refused to do, Fox News congressional correspondent Chad Pergram spent part of Special Report highlighting how “A canyon yawns between liberals and moderates. It threatens to shred the Democratic coalition and stunt the rest of their agenda.”

“President Biden's agenda is teetering on the edge. Even if some Democrats won't admit it,” Pergram announced at the top of his report. “It starts with moderate Democrat Joe Manchin likely dashing hopes of passing a voting rights bill.”

The media knew Manchin was the lynchpin to getting the Democrats’ federal takeover of the election system through Congress. That’s why they had been pestering him for weeks, lobbying him in an effort to get him to support killing the filibuster.

And they were still at it, according to a Tuesday soundbite shared by Pergram:

UNIDENTIFIED JOURNALIST: Your position on S1 that change based on this conversation?

MANCHIN: No, I don't think anybody changed positions on that. We’re just learning where everybody’s coming from more.

“Liberal Democrats incinerated Manchin for his opposition to the voting bill,” he added. And the liberal media themselves were a part of it.

On Monday, NewsBusters reported how the networks were having a meltdown. On CBS This Morning, senior White House correspondent Weijia Jiang parroted a far-left claim that Manchin was supporting the revival of Jim Crow:

Some progressives were quick to criticize Manchin like New York congressman Mondaire Jones who tweeted, 'Manchin's op-ed might as well be titled Why I'll vote to preserve Jim Crow.'

And on MSNBC, host Nicolle Wallace screeched about how Manchin had “wittingly” contributed to the “official death sentence” of the country.

The only time Manchin came up Tuesday evening was when NBC Nightly News anchor Lester Holt asked Vice President Kamala Harris, “where does that leave the effort?” Besides that, the networks kept the focus on bashing Republicans by blaming them for the failed negotiations on an infrastructure bill, while praising Harris for her trip to seemingly everywhere but the U.S.-Mexico border.

This attempt to imitate the White House press office was made possible because of the lucrative sponsorships from Progressive on ABC, CBS, and NBC. Their contact information is linked so you can tell them about the biased news they fund. CBS Evening News has also asked people to text anchor Norah O’Donnell at this number: (202) 217-1107.

BRET BAIER: Bring it back here to Washington, D.C. There’s a major dispute in Congress over the Democratic attempt at election reform. A key touchstone of their legislative agenda. But what they call “voting rights” is being decried by critics as unconstitutional, undermining the electoral process. Congressional correspondent Chad Pergram takes a look tonight from Capitol Hill.

CHAD PERGRAM: President Biden's agenda is teetering on the edge. Even if some Democrats won't admit it.

SEN. CHUCK SCHUMER (D-NY): In the past, our caucus has stayed unified and produced that big bold action.

SEN. JOE MANCHIN (D-WV): I think everybody pretty much knows the importance of what we are doing.

UNIDENTIFIED JOURNALIST: Your position on S1 that change based on this conversation?

MANCHIN: No, I don't think anybody changed positions on that. We’re just learning where everybody’s coming from more.

PERGRAM: Liberal Democrat incinerated Manchin for his opposition to the voting bill.

MANCHIN: I understand the frustration.

PERGRAM: Republicans believe Democrats are just trying to apiece their base.

SEN. MITCH MCCONNELL (R-KY): The majority leader decided that June is kind of the check the box month with all of the extreme left-wing provisions that they support that have been come out of the House.

PERGRAM: A canyon yawns between liberals and moderates. It threatens to shred the Democratic coalition and stunt the rest of their agenda.

MICHAEL BITZER (Catawba College): Joe Manchin can't go back to West Virginia and his constituents and sell very liberal progressive items on the agenda and expect to be reelected.

PERGRAM: Democrats can't afford to give up on Manchin. Schumer says he will bring up the voting bill late this month.

SCHUMER: Is it possible we might change a few things here and there? We are going to do it.

The Lewis bill curbs state efforts to limit voting, but Pelosi says that bill won't be ready until fall. McConnell says the Lewis bill would rewrite voting systems for every state. Bret?