Cuomo Advised Brother on How to Survive Sexual Harassment Scandals 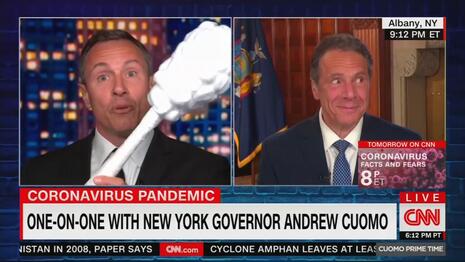 On the one-year anniversary of CNN Prime Time host Chris Cuomo trying to distract the public from his brother, New York Democratic Governor Andrew Cuomo’s unfolding nursing home deaths cover-up scandal by pulling out giant cotton swabs, The Washington Post dropped a bombshell story detailing how Chris was part of Andrew’s sexual harassment advisory team, told his elder brother not to resign, and to resist such accountability. And he never disclosed this to his audience.

According to Post reporters Josh Dawsey and Sarah Ellison, “CNN anchor Chris Cuomo advised his brother, New York Gov. Andrew M. Cuomo, and senior members of the governor’s staff on how to respond to sexual harassment allegations made earlier this year by women who had worked with the governor, according to four people familiar with the discussions.”

They added: “Cuomo, one of the network’s top stars, joined a series of conference calls that included the Democratic governor’s top aide, his communications team, lawyers and a number of outside advisers, according to the people familiar with the conversations, who spoke on the condition of anonymity to describe the private sessions.”

The reporting went on to note that Chris had “encouraged his brother to take a defiant position and not to resign from the governor’s office.”

Consumers of news might recall that during a March phone briefing, Andrew blamed “cancel culture” for the numerous women who had come forward with allegations of sexual misconduct.

Well, it appeared that Andrew was following his little brother’s advice, because the paper reported: “At one point, [Chris] used the phrase ‘cancel culture’ as a reason to hold firm in the face of the allegations, two people present on one call said.”

There was definitely brotherly love between the two Cuomo’s and a back-scratch relationship between them.

Also in March, the Albany Times-Union reported that the embattled Governor had given his family special priority status for receiving and processing COVID tests in the early days of the pandemic, including Chris.

“Members of Cuomo's family including his brother, his mother and at least one of his sisters were also tested by top health department officials — some several times,” the local paper reported. The Cuomo family also had some of the state’s top health care experts personally visit them in their homes to do the testing. 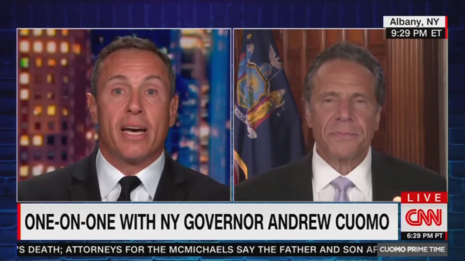 Rejecting accountability, Chris refused to address the story on his show when it broke.

The clarity on Chris’s role in his brother’s scandal management came the day after The New York Times reported that federal investigators, probing Andrew’s cover-up of nursing home deaths, said they were widening the scope to include the testing scandal.

And shockingly, CNN admitted to The Post what Chris did was “inappropriate” but said Chris was not going to be punished for his massive breach of journalistic ethics:

“However, it was inappropriate to engage in conversations that included members of the Governor’s staff, which Chris acknowledges,” the statement added. “He will not participate in such conversations going forward.”

The network said Cuomo will not be disciplined.

Former CNN media reporter (now with NBC & MSNBC) Dylan Byers chimed in on Twitter to explain that CNN wasn’t going to drop their piece of the Cuomo collection because they had just renewed his contract.

“Cuomo just re-upped his contract for many millions per year. CNN ratings aren’t going down bc [sic] of this,” he wrote. “They’ve invested in him; don’t want to pay him to go away & don’t have good replacement. So life goes on!”

Byers went on to say that the only thing that would cause CNN to dump the toxic Cuomo was “An overwhelming revolt from Journalists at CNN coupled with sustained damage to the CNN brand that goes beyond Twitter and into the real world.”

Now, the serious questions would be: Why would it take such an effort to move Mt. Zucker? Why wasn’t that revolt apparently happening? And why did Chris never disclose it on his show?