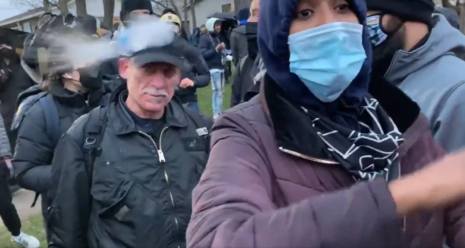 Shortly before the handoff between CNN’s Anderson Cooper 360 and Cuomo Prime Time on Wednesday, a person from one of their crews on the ground in Brooklyn Center, Minnesota became the victim of battery when a member of the Black Lives Matter mob beamed him in the head with an apparently frozen water bottle, causing him to seemingly lose consciousness for a moment and fall to the ground.

Even though the crew was later chased away from the chaotic and violent scene, CNN never mentioned it on-air (as of this blog's publication).

In a video recorded and posted to Twitter by Washington Examiner reporter Nic Rowan, a crowd can be seen swarming around the CNN crew supporting correspondent Miguel Marquez. A woman who seemed to be a part of the crowd stood with her back to the crew saying “it’s all peace baby, it’s all peace.”

Protesters throw a water bottle at a CNN crew member and hit him square on the head. They mock him when he falls down. pic.twitter.com/cBfRN9DJOj

But moments later, the water bottle flew in from off-camera and struck an older, male crew member in the head with a loud thud. After he crumpled to the ground, the BLM crowd could be heard mocking his situation. “A water bottle knocked you out,” a man said before laughing. The BLMers apparently thought the man was a police officer because a woman can be heard yelling: “The cop right there needs a medic.”

In a follow-up video, Rowan documents the CNN crew being chased down the street. The crew sought refuge in an SUV and drove off. Some in the mob were unaware of the situation and could be heard asking what happened. One woman responded with: “CNN being some bitches, so they’re getting kicked out.”

Protesters just chased the entire CNN crew away from the police precinct. pic.twitter.com/r6TGmnBxIH

In a tweet posted two hours after the attack, Marquez wrote:

My team and I are fine and I appreciate your concern. I hope for equal justice under the law and will continue to report on this vital story as it unfolds.

One would think such an attack on a member of the press would warrant some airtime or at least a quick mention. But nothing was reported during the following hour and beyond. And judging from CNN’s conduct, the network either didn’t care about the health and safety of their crews in the field or they were more interested in making the violent crowd look good.

At the top of the program, host Chris Cuomo claimed the crowd was well-behaved: “Protesters have gathered again tonight for a fourth straight night in Brooklyn Center, Minnesota. So far, it is calm, and that is good.”

Cuomo eventually spoke to correspondent Sara Sidner, who was also on the ground. At one point, she noted that “you'll see a water bottle thrown over” at police, and sometimes rocks. She then seemed to gripe about how police would respond with tear gas and rubber bullets. She then noted how “journalists in some of these protests in years past have lost an eye” to rubber bullets.

But still, no mention of her colleague battered in the head and knocked to the ground.

Sidner made another appearance after Cuomo gave way to Don Lemon and CNN Tonight. In that appearance, she described how anger the crowd had become. “We have seen early on the crowd being a bit more angry earlier … and you can see bottles being thrown,” she reported.

At one point, Lemon wanted to know why the police weren’t leaving the safety of the prescient to go and talk to the crowd:

LEMON: Have you seen that at all or is it just the police in these phalanx, in these lines not really intermingling or integrating with the protesters to try to talk with them or develop some sort of relationship with them?

Perhaps one of the things the cops are afraid of is a frozen water bottle to the head.

As Lemon was going to break after that exchange, he mentioned that Marquez was still on the ground. “We're going to get back to Sara Snyder out there. We also have other correspondents. Miguel Marquez is out in the crowd as well. And we have our correspondents, our producers and our camera crews out in Brooklyn Center, Minnesota, tonight.”

Marquez did not make an appearance the rest of the hour.

CHRIS CUOMO: Now, a jury will take to court and will decide whether second-degree manslaughter is found by the facts in law of this situation. That is in a court of law. There is also a court of public opinion. And that may play out as early as tonight. Protesters have gathered again tonight for a fourth straight night in Brooklyn Center, Minnesota. So far, it is calm, and that is good.

Because it lingers in the air for a while. Rubber bullets have been fired. We saw someone who had been hit by a rubber bullet. Those things really sting. They can injure you very badly. We know journalists in some of these protests in years past have lost an eye. So, it’s not – they are less than lethal but it doesn't mean they can't maim you.