NBC Demands Trump Be 'Conciliatory' and Concede Like Al Gore 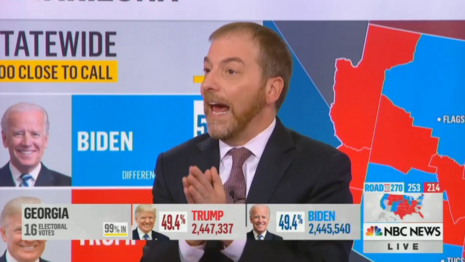 As the ballot counting dragged on Thursday in key states around the country and President Trump continued to fight for a second term, the partisan “journalists” at NBC News had grown obviously irritated that they couldn’t declare their candidate the winner. At no time was this more blatant than their primetime coverage when they demanded Trump be “conciliatory” and handle his concession like former Vice President Al Gore did in 2000.

After NBC had spoken with Gore earlier in the night about how Trump should act during this time, NBC Nightly News anchor Lester Holt had questions for former Obama Press Secretary Robert Gibbs about how much damage to the country Trump was doing:

HOLT: If this thing goes the Vice President's way, can President Trump still do damage? We heard him tonight with these for claims of conspiracies with the polls and illegal votes. If he's defeated, can he still do damage?

GIBBS: Absolutely. Absolutely. Look, there’s no doubt that is supporters, which we know is a significant part of country. He got more of those voters to come out in 2020 than did he in 2016. So, there’ going to watch and listen and many will act and believe exactly what he tells them. So, there is significant damage he can do.

It was Gibbs who kicked off the doting praise for Gore. “To lose an election by less than 600 votes nationally, and to do it in the way he did it, I think speaks volumes and can hopefully be a model for not just Trump or anybody who loses an election,” he touted, “because the magnanimity that he left the office so close to being president of the United States.”

Immediately following the Gibbs interview, NBC political director and Meet the Press moderator Chuck Todd chimed in with his demands for President Trump: “Also, just to be also, it's politically better to be conciliatory cause it puts you in a position, I mean, Al Gore was certainly in the position to run for president again by the way he handled himself there. There was a lot of positive vibes.”

Todd’s unsolicited advice continued with him telling Trump how he should concede in the end:

So, there’s an argument, if the President is serious about wanting to run again in 2024, how he handles this is moment is actually perhaps helpful to his future political standing. So, it’s not just the long-term right thing for the country. And, I think, Al Gore to this day it’s the single most important concession speech in this country’s modern history.

“I would say, people should just look it up,” Democratic fangirl and senior Washington correspondent Andrea Mitchell instructed viewers. “Look that speech up and read it and think about it.”

Todd’s criticism continued: “Again, even looking at it from a crass political perspective, it doesn't make essential for the President to behave this way if he actually has aspirations in 2024.”

This ridiculous demand from President Trump was made possible because of a lucrative sponsorship from GEICO. Their contact information is linked so you can let them know about the biased news they’re funding.