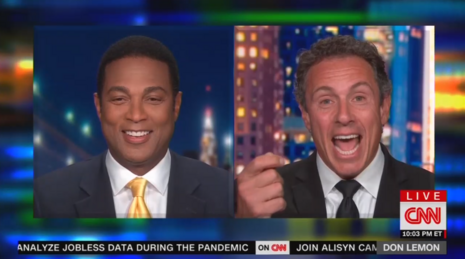 CNN needs to put up a health warning when the dumb and dumber duo of Chris “Fredo” Cuomo (PrimeTime) and Don Lemon (CNN Tonight) are on the screen together because viewers can get whiplash from their flailing opinions. It was especially needed on Thursday, when the pair were back to mocking concerns about violent crime as murders and shooting continued to rise in New York City.

With Cuomo attacking Attorney General William Barr and those decrying violent riots as just white people afraid of “those black guys,” Lemon wanted to be “honest” about the violence in New York City. “Honestly, because if you watch a certain state TV and you listen to conservative media you would think that, you know, entire cities are just, you know, embroiled in fights and fires and whatever,” he whined.

His example of how safe the city was to cite how he and Fredo were able to eat dinner in a rich area near the CNN office building.

“We went out and had a great dinner in New York City tonight,” he declared. “People actually walked up to us and said ‘thank you for -- I watch you every night. I can't believe’ -- They had to do a double-take at us actually hanging out and not seeing us on the TV screen. But New York City was not a hellscape, was it?”

“I mean, that one guy who ran by with the machete who tried to get us,” Fredo joked. Cuomo went on to laugh about how Lemon had pulled out the company credit card to pay for their meal. He described it as “the Holy Spirit kind of flying through” him.

NewsBusters readers might recall how these two dismissed and mocked reports of rising violent crime over the summer (click “expand):

LEMON: “Democratic cities are in chaos right now. Is this what you want from Joe Biden? And they’re gonna take your country away. And they’re taking down the statues.”

LEMON: “Oh my gosh! It’s so bad and they get defunding the police.” And it’s like --- [ROLLS EYES] And the people who you saw there for the most part --- not --- not them specifically. I’m talking about as a whole. Fall for it. They fall for it and that's why they do things like what they did. They want to paint over signs and think “it's our country.”

Then, a month to the day later, Cuomo blamed the obvious rising crime on states reopening their economies. “The number of homicides are spiking. Look at the data. New York, Chicago, Louisville, Philadelphia, New Orleans, Denver, Miami,” he said at the time, before lashing out the White House.

Does anyone else’s neck hurt from them going back to mocking violent crime again?

“It is a very beautiful, concerted action between the two of them. It's unfortunate that its point of purpose is to divide the American people,” Cuomo asserted on Thursday, speaking of how President Trump and Fox News talked about rising crime.

But in reality, it wasn’t just a right-wing talking point. According to a New York Times report from September 2, “In August alone, there were 242 shootings in the city, compared with 91 last year, and the number of murders rose from 36 to 53. As a result, the city surpassed 1,000 shootings before Labor Day…”

The liberal paper added: “Violent crime always rises in the summer, but this year has been extreme in New York. Since May, the city has recorded 791 shootings, a more than 140 percent increase over the same period in 2019. The 180 murders seen between May and August is a more than 51 percent increase compared to 2019.”

This handoff chit chat between Cuomo and Lemon was a blatant case of disgusting elitism. Because while they mocked the existence of rising violent crime in Democratic-controlled cities across the country, they didn’t need to live in it. The two of them often talk about how close they live to each other and Hamptons magazine did a full feature last year showing off Lemon’s swanky Sag Harbor home (Lemon has also lied about living in Harlem).

This new round of dismissing and mocking rising violent crime was possible because of lucrative sponsorships from Chevrolet, Ancestry, and Sandals Hotels and Reports. Their contact information is linked so you can tell them about the biased news they’re funding.

CHRIS CUOMO: Yeah, I mean, the AG seeming to throw around the crime of sedition as a political tool is very frightening.

CUOMO: Especially when it flies in the face of what this President seems to be selling the American people, which is, “you got to watch out for these institutions, they can come and get you.”

CUOMO: The AG says there are definitely people in the government working to thwart this administration. Well, what does he call trying to bait sedition cases against the causes that they don't like?

LEMON: And also trying to -- the scary black people out there. When you actually look at what -- and Preet Bharara mentioned it before. The FBI director today testifying about What's the biggest threat, terror threat, and that is white supremacists --

LEMON: -- in this country.  But you cannot -- I'm going to do a report on it. Trust me, you know I'm going to get there. But, yeah, it's the largest group of racially-motivated domestic terrorists.

LEMON: But you wouldn't know that because it's scary. There are all these protesters out there. There is all this rioting and looting.

CUOMO: I mean. Listen, you see the faces on those black guys? I mean, they are angry.

LEMON: So let's talk about that, Chris. Honestly, because if you watch a certain state TV and you listen to conservative media you would think that, you know, entire cities are just, you know, embroiled in fights and fires and whatever.

We went out and had a great dinner in New York City tonight. People actually walked up to us and said “thank you for -- I watch you every night. I can't believe” -- They had to do a double-take at us actually hanging out and not seeing us on the TV screen. But New York City was not a hellscape, was it?

CUOMO: I mean, that one guy who ran by with the machete who tried to get us. No, of course it isn't. Look, his campaign is “be afraid.” The genius twist by Fox News is they say that's what they say we want to do, is scare you. Which really enhances the President's ability to do it.

CUOMO: It is a very beautiful, concerted action between the two of them. It's unfortunate that its point of purpose is to divide the American people.

CUOMO: But there we were out having dinner. It's great to be together in the city. We were met by a great group -- a lot of people came up to us.

CUOMO: Who helped me understand how to explain better to everybody else about why we can do so much better with the types of testing we're using

And, listen, before people try to twist what we're saying. Nobody is condoning violence here. We know that there is violence out there, but entire cities are not on fire and in tumult. There are a few blocks. And when people do that and they, you know, burn things and break into stores and loot, wrong, wrong, wrong on every level, but we want people to know that things are -- things are going to -- are going to get better. We hope. With the right leadership. And then, you know, people on November 3rd will make up their minds of what that leadership should be.

CUOMO: Absolutely. But I do want people to always keep in focus this. We have heard people say that the fight for equality and justice, simply defined as fairness under law, has been depicted this way before.

CUOMO: And it was in the '60s. And you had the same kind of white fright purveyors saying, “oh, they don't want to just be equal, they want what you have.”

CUOMO: They did it then and they are doing it now and one of them is the President of the United States.

LEMON: And they said the same thing about Dr. King. There are -- if you look at news reports -- and there is this one cartoon that was -- that I keep at my desk that actually Bernice King tweeted out. Where they were doing the same thing. Where Dr. King is being interviewed by someone and he’s saying, “oh, peaceful protest” and then there is, you know, things that look like riots behind him. So it's the same sort of messaging. Everything old is new again.