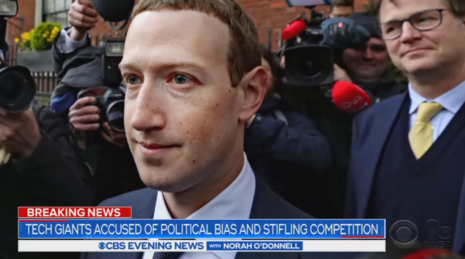 In a contentious antitrust hearing on Wednesday, four of America’s tech titans (Amazon, Apple, Facebook, and Google) were grilled by Democrats and Republicans about their shady business practices. House Republicans came down hard on the issues of political bias and censorship of conservatives. But while ABC’s World News Tonight ditched covering the hearing altogether, the CBS Evening News defended efforts by Facebook and Google to censor conservative outlets like NewsBusters.

After explaining how Amazon CEO Jeff Bezos responded to the grilling from Democrats, chief congressional correspondent Nancy Cordes defended Facebook’s censorship of conservatives. And despite how congressional Republicans provided ample evidence of political bias, Cordes brushed it off by only focusing on how Facebook deleted a video Trump posted.

“Well, Facebook CEO Mark Zuckerberg said that his company does prohibit content that could harm people, and so his platform others took the video down,” she chided.

Meanwhile, conservative outlets like NewsBusters have been on the receiving end of Facebook’s ridiculous censorship policy. As our TechWatch writer Corinne Weaver documented at the start of July, NewsBusters associate editor Scott Whitlock exposed a bogus USA Today fact-check that claimed the Democratic Party didn’t found the KKK nor start the Civil War. Facebook responded by slapping a warning on the piece and fact-checked it with the bogus one.

Cordes also refused to note that Google CEO Sundar Pichai was grilled on why his company had blacklisted conservative news outlets last week, including NewsBusters, and backtracked after getting caught.

This author was also the target of social media censorship. Though they weren’t at the Wednesday hearing, Twitter suspended my account after I dared to mock the drunken antics of CNN’s Don Lemon. They eventually apologized and reinstated my account, and I didn’t need to delete the tweet.

In a bit of a contrast on NBC Nightly News, business and tech correspondent Jo Ling Kent presented Republican hearing input without criticism. And the first soundbite she used was of Congressman Jim Jordan (R-OH) calling out their contempt for conservatives:

JO LING KENT: The antitrust hearing was contentious from the start.

JORDAN: Big tech’s out to get conservatives. That's not a suspicion, that’s not a hunch That's a fact.

She also included Florida Congressman Matt Gaetz (R), who went after Google for working with the Chinese military:

GAETZ: General Dunford says that your company is directly aiding the Chinese military?

PICHAI: Congressman, with respect, we are not working with the Chinese military.

“Congress aims to finish its investigation by the end of the year. But in the tech community, there is skepticism it will lead to real change,” she concluded.

CBS’s defense of shutting down conservative speech was made possible because of lucrative sponsorships from Oral-B and Norton Antivirus. Their contact information is linked so you can let your voice be heard. CBS Evening News has also instructed people to “text Norah” at this number: (202) 217-1107.

NORAH O’DONNELL: For the first time, the titans of tech testified together before Congress. Amazon's Jeff Bezos, Apple's Tim Cook, Facebook's Mark Zuckerberg, and Google's Sundar Pichai were confronted with charges of stifling competition and political bias. CBS' Nancy Cordes joins us tonight from Capitol Hill. So, Nancy, how did these CEOs respond?

NANCY CORDES: Norah, they insisted that their companies are not corporate bullies that systematically buy out, copy, or destroy their rivals. Amazon's CEO, Jeff Bezos, in his first congressional appearance, insisted that there are plenty of shopping options out there, even though it's now estimated that Amazon controls 44 percent of U.S. e-commerce.

This was a high-stakes appearance for all four of these companies. They're facing anti-trust investigations here and abroad, and there are some in Congress, Norah, who think they should be broken up.

O’DONNELL: And what about the questions when it comes to political bias? What did they say?

CORDES: Right. Republicans expressed concern that the President and his son may have been penalized on social media this week for sharing that video that contained false claims about coronavirus. Well, Facebook CEO Mark Zuckerberg said that his company does prohibit content that could harm people, and so his platform others took the video down. But not before it was viewed more than millions of times.

LESTER HOLT: In Congress, four giants of the tech world were on the hot seat, including for the first time Amazon's Jeff Bezos. Their companies accused of having too much power, and that’s hurting consumers. Here's Jo Ling Kent.

JO LING KENT: The antitrust hearing was contentious from the start.

REP. JIM JORDAN (R-OH): Big tech’s out to get conservatives. That's not a suspicion, that’s not a hunch That's a fact.

KENT: Four of the most powerful tech CEOs appearing virtually. Congress investigating if their companies are too big.

REP. DAVID CICILLINE (D-RI): Simply put, they have too much power. [Transition] Our founders would not bow before a king, nor should we bow before the emperors of the online economy.

KENT: Billionaire Jeff Bezos from Amazon, the richest man in the world, testifying before Congress for the first time; facing repeated criticism over a Wall Street Journal report that Amazon uses information from small companies doing business on its site to develop competing products that are cheaper.

JEFF BEZOS: I can't answer that question yes or no. What I can tell you is we have a policy against using seller specific data to aid our private label business. But I can't guarantee you that that policy has never been violated.

REP. JERRY NADLER (D-NY): In your own words, you purchased Instagram to neutralize a competitive threat. [Transition] Why shouldn't Instagram now be broken off into a separate company?

MARK ZUCKERBERG: Congressman, I think the FTC had all these documents and reviewed this and unanimously voted at the time not to challenge the acquisition.

SUNDAR PICHAI: Congressman, with respect, we are not working with the Chinese military.

KENT: Congress aims to finish its investigation by the end of the year. But in the tech community, there is skepticism it will lead to real change. Lester?