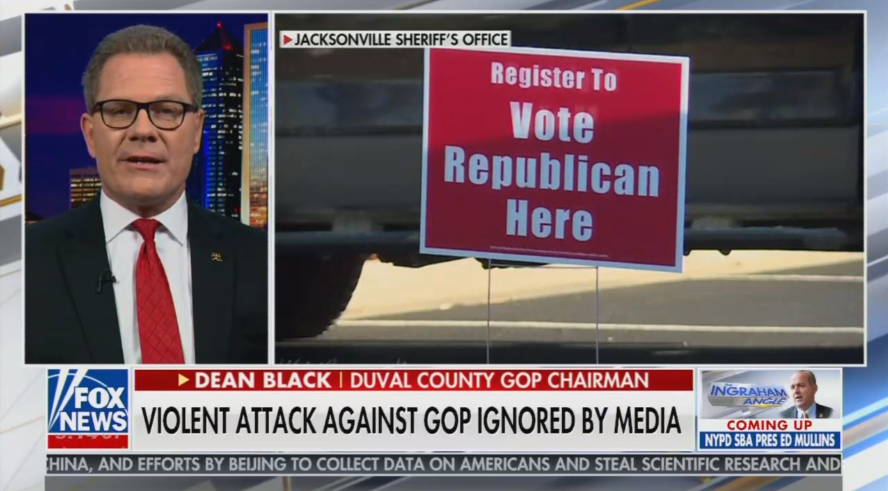 It has been four days since a deranged leftist tried to kill six Trump supporters at a voter registration event in Duval Country, Florida on Saturday with a van. In that time frame, the story had only generated a measly one minute and four seconds of airtime between three brief mentions on liberal news outlets, NBC and CNN. That’s despite the fact that the attacker had admitted to authorities that his actions were motivated by his hatred of President Trump.

As NewsBusters reported on Sunday, between the evening and morning newscasts of ABC, CBS, and NBC, immediately following the attack, only NBC thought the attack was noteworthy but only gave the story 25 seconds. Since then, NBC has not updated the story nor have their broadcast competitors decide to give it airtime.

The attack was brought up twice on CNN. The first time when CNN analyst Sarah Isgur, a former Trump DOJ spokesperson, brought it up on Sunday’s Reliable Sources while discussing liberal reactions to Rush Limbaugh at the State of the Union. That instance lasted 23 seconds. CNN finally addressed the story in the form of a report on Monday. But they hid it in a news brief toward the end of their 5:00 a.m. show, Early Start. It lasted just 16 seconds.

But what about print media and online publications? They don’t need to cram things in between commercial breaks, so surely they could dedicate the ink and pixels. Well, they were a mess.

As The Script's Jeryl Bier broke on Twitter, The New Yorker Times couldn’t be bothered to write their own story on it. Instead, they just reprinted an Associated Press report titled: “Report Says Man Who Drove Into GOP Tent Didn't Like Trump.” And that AP report didn't come out until Tuesday, three days after the attack.

Bier also pointed out how Politico’s headline managed to make the Republicans targeted in the attack look like the violent ones. “Republicans vow ‘revenge’ at ballot box after volunteers nearly hit by van,” they proclaimed.

Early on, the media insisted we didn’t know the attacker’s motives. But in a Monday interview with Fox News Channel host Laura Ingraham, the chairman of the Duval Country GOP, Dean Black explained what happened:

It was clearly a partisan motivated attack, the guy pulled up-- I mean it was a plainly marked event. You could not mistake what was happening, there were Trump signs everywhere, there were obviously Republicans, there was a big bright red tent. The guy pulls up, he gets out of his cellphone, he first gives them an obscene gesture, and then he accelerates towards them as he is videotaping it. Our elderly volunteers barely get out of the way, he plows through the location upending everything, and then he backs up and he videotaped it again. He was proud of his work.

The attack was repeatedly given airtime on Fox News Channel. During Wednesday’s Special Report, anchor Bret Baier informed viewers on the attacker’s admission of his motives. “The man who rammed van into a Republican Party voter registration tent Saturday in Florida told deputies he does not like President Trump and, quote ‘someone had to take a stand,’” Baier reported.

Some in the media might argue that since no one was injured it didn’t justify proper coverage. But what a terrible standard to set when a body count is made the priority.