“Merry Impeachmas from the WaPo team! [Paul Kane] is buying ... w/[Karoun Demirjian] [Seung Min Kim] [Mike DeBonis],” she gleefully shared in the now-deleted tweet, along with a picture of them around a restaurant table with food and at least two beers. 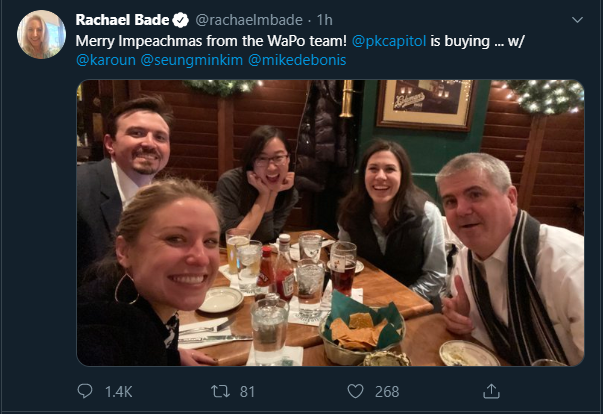 Interestingly, three of the five newspaper writers involved with the apparent celebration (Bade, Demirjian, and Kim) are CNN political analysts.

Rightly, the supposedly objective journalists were immediately called out and derided on social media.

“What the hell were you thinking when you tweeted this? Some of us still care about ethics and unbiased reporting, and this garbage makes it harder for all of us by reinforcing a stereotype. Come on guys,” blasted Fox 11 Los Angeles reporter Bill Melugin.

Stephen Miller (@redsteeze) went on a tear. “Do these people have any self-awareness? Any at all,” he tweeted. “Cool, you had a long night at work. I get it. It was a very somber day for you. But maybe don’t smile hashtag your tweet with the resistances slogan du jour if you don’t want to prove Trump’s point about your paper.”

Our friend Derek Hunter from the Daily Caller added, “All these people are ‘reporters.’ Nice work, @washingtonpost.”

In response to the avalanche of ridicule, Bade announced she would delete the tweet because people were somehow misinterpreting it (text below):

I’m deleting a tweeting tonight that is being misinterpreted by some as an endorsement of some kind. To be absolutely clear, we at the Post are merely glad we are getting a break for the holidays after a long 3 months. I will retweet the group photo w/ a better caption!

Unfortunately for this crew, the internet is forever. Now the world will know how she and other journalists from the “Democracy Dies in Darkness” outfit celebrated the impeachment of a president.