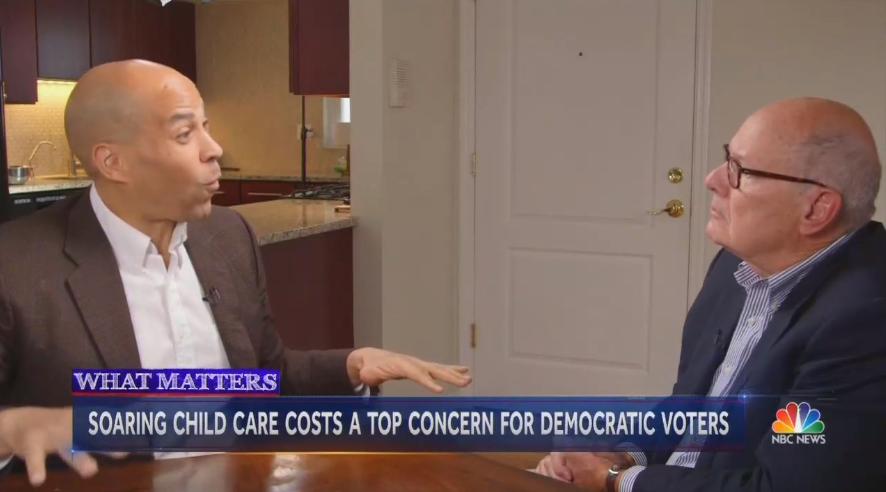 Paying for childcare was a problem not only for Democratic voters, but for Americans of all political influences. But for last Friday’s edition of their biased “What Matters” series, where they talk solely to Democratic voters, NBC Nightly News was in the kitchen of 2020 hopeful, New Jersey Senator Cory Booker to talk about the issue. Of course, as the network did when hawking the “Big Idea” from Democrats on paid family leave, they’ve been ignoring Republicans solutions to this common problem.

“It's also outrageous. In most states in America, daycare for children, childcare for children is more expensive than the college tuition at your state university,” the Democratic Senator told NBC correspondent Harry Smith.

To that, Smith made the pitch to NBC viewers:

Booker's answer, using government funds to limit the cost of childcare to seven percent of parents' salaries. And expanding tax credits to Americans who stay home to take care of children or aging parents.

NBC treated the expanding tax credits as a concept cooked up by Democratic lawmakers. But in reality, the GOP tax cuts of 2017 doubled the child tax credit to $2,000 per child. A fact the liberal media largely downplayed while whipping up anti-Republican hysteria at the time.

According to NerdWallet, “The Child Tax Credit is a tax credit worth up to $2,000 per qualifying child and $500 per qualifying dependent in 2019. It is one of three kid-focused federal tax credits that are among the most effective ways to reduce your tax bill.”

“The Child and Dependent Care Credit can get you 20% to 35% of up to $3,000 of child care and similar costs for a child under 13, an incapacitated spouse or parent, or another dependent so that you can work (and up to $6,000 of expenses for two or more dependents),” they add.

Then there was the fact that studies have shown that universal childcare also had some pretty serious problems. As the National Review reported back in 2015, a liberal economic by the name of Jonathan Gruber, who was also an architect of ObamaCare, discovered, in addition of soaring costs, there were negative social occurrences that paralleled the implantation of such a program in Quebec, Canada:

It turns out that exposure to childcare in Quebec negatively impacts children in both the short and long terms. Compared with their peers in other provinces, young Québécois children had higher rates of anxiety, aggression, and hyperactivity. As teenagers, these children committed more crimes and were generally less satisfied with their lives. The program had no long-term positive effect on children’s standardized test scores or cognitive abilities, and may even have had a negative effect.

“It’s possible that center-based care has an inherently negative impact on children,” as opposed to parent-based care the Review noted. A point, obviously skipped by NBC.

LESTER HOLT: With less than two weeks until the next Democratic debate, NBC's Harry Smith is asking Democratic voters what's most important to them and taking their questions directly to the candidates. Tonight, it's Senator Cory booker in What Matters.

HARRY SMITH: We're inside Cory Booker's kitchen in Newark, New Jersey with this question. From a Democratic voter.

SEN. CORY BOOKER: It's also outrageous. In most states in America, daycare for children, childcare for children is more expensive than the college tuition at your state university.

SMITH: Booker's answer, using government funds to limit the cost of childcare to seven percent of parents' salaries. And expanding tax credits to Americans who stay home to take care of children or aging parents.

So, people who would be staying home, we're going to pay them to stay home? Is that –

BOOKER: I love your look but I want to get people -- When I was mayor of my city, I had to do fierce balance sheet analysis, which often led me to the moral conclusion, as well. The morally right thing to do in America is the economically right thing to do, as well. So, let's get back to these people that you were saying, paying people who have to stay home for their children, no. You're honoring what is work.

BOOKER: As I would call it: penny immoral and pound foolish, in the way we're running our society right now.