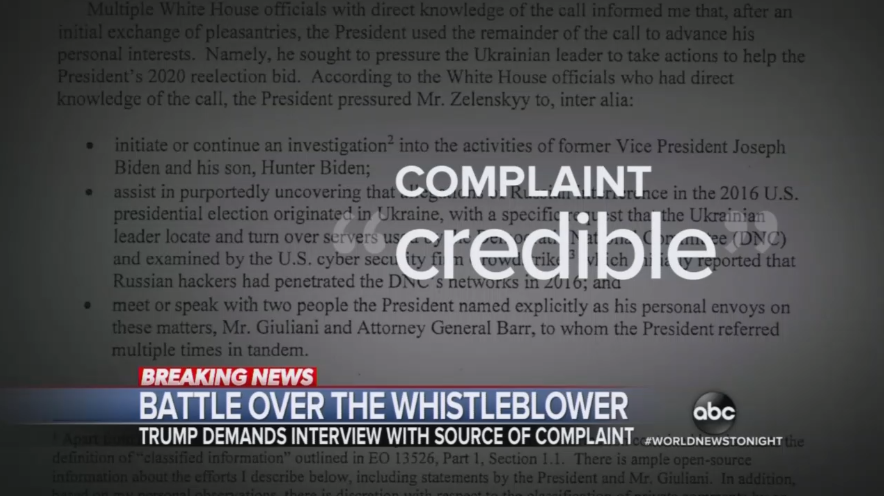 After lying about the “favor” President Trump asked of the president of Ukraine last week, ABC’s World News Tonight was back with fresh lies to serve to their viewers during their Tuesday newscast. This time they set out to deceive folks about what kind of knowledge the so-called whistleblower actually had. Despite the whistleblower initially admitting they didn’t have first-hand knowledge about the phone call, ABC decried those who stated that fact.

“The President and his allies have attacked the whistleblower's credibility, claiming the person relied on second-hand information,” whined senior White House correspondent Cecilia Vega. “But the Intelligence Community’s Inspector General, who was appointed by President Trump, says that is not true.”

Vega adding: “[The ICIG] says the whistleblower filed the complaint claiming to have ‘personal and/or direct knowledge of events or records involved,’ in addition to information from other people.”

But according to journalists over at Fox News, chief Intelligence correspondent Catherine Herridge and editor Gregg Re, what ABC and the ICIG claim conflicts with the publically disclosed documents:

The inspector general for the intelligence community said late Monday that the whistleblower whose complaint touched off an impeachment inquiry claimed to have firsthand knowledge of misconduct -- a claim that appears to conflict with documents sent to Congress and the director of national intelligence.

Herridge and Re quoted directly from the whistleblower complaint that was sent to Congress and clearly spelled out the writer’s lack of first-hand knowledge:

However, the declassified whistleblower complaint sent to Congress last week stated: “I was not a direct witness to most of the events described. However, I found my colleagues’ accounts of these events to be credible because, in almost all cases, multiple officials recounted fact patterns that were consistent with one another.”

The Federalist was the first publication to expose how the ICIG recently and secretly edited their whistleblower form to eliminate the need for first-hand information. In a follow-up report out Tuesday, co-founder Sean Davis pointed out that in a recent statement (the same one Vega cited) the ICIG admitted to editing the document.

In the process of reviewing and clarifying those forms, and in response to recent press inquiries regarding the instant whistleblower complaint, the ICIG understood that certain language in those forms and, more specifically, the informational materials accompanying the forms, could be read – incorrectly – as suggesting that whistleblowers must possess firsthand information in order to file an urgent concern complaint with the congressional intelligence committees.

While the ICIG claimed the old form caused confusion and would lead people to “incorrectly” believe first-hand information was needed to file a formal complaint, Davis noted that the form “said, in bold, underlined, all-caps text, “FIRST-HAND INFORMATION REQUIRED.” He provided a screenshot as evidence.

The Federalist raised serious questions about the timeline of events concerning the edit, when the press was inquiring about the complaint, and when Congress and the DNI were informed about the complaint. They also reported that the ICIG had obfuscated when and which version of the form the whistleblower filled out.

DAVID MUIR: President Trump, meanwhile, tweeting that he is entitled to interview the whistleblower, while also dismissing that person’s complaint as second-hand information, even though the transcript of the phone call made public by the White House mirrors much of the complaint. And tonight, a leading Republican saying the whistle-blower should be protected. Here's our senior White House correspondent Cecilia Vega now.

UNIDENTIFIED REPORTER: Mr. President, do you now know who the whistleblower is, sir?

VEGA: But today, a public rebuke from Iowa's Republican Senator Chuck Grassley, who defended the whistle-blower, saying "This person appears to have followed the whistleblower protection laws and ought to be heard out and protected. Uninformed speculation is counterproductive and doesn't serve the country."

The President and his allies have attacked the whistleblower's credibility, claiming the person relied on second-hand information.

SEN. LINDSEY GRAHAM: The entire whistleblower complaint is based on hearsay.

VEGA: But the Intelligence Community’s Inspector General, who was appointed by President Trump, says that is not true. He says the whistleblower filed the complaint claiming to have “personal and/or direct knowledge of events or records involved,” in addition to information from other people.

The Inspector General says that's one of the reasons he found the complaint "Credible." And, indeed, the whistleblower's own description of that conversation between President Trump and the president of Ukraine matches the record of the call released by the White House.

MUIR: And Cecilia, you've reported, the whistleblower's lawyer has said the President's words are putting his client at risk.

VEGA: Yeah, David, they say they have serious concerns for their client's personal safety. House investigators, you know, have reached a deal to meet with this whistleblower, as Democrats say they want to take every precaution to protect the person's identity. A date for this meeting has not yet been set, David.

MUIR: All right, Cecilia, our thanks to you again, tonight.