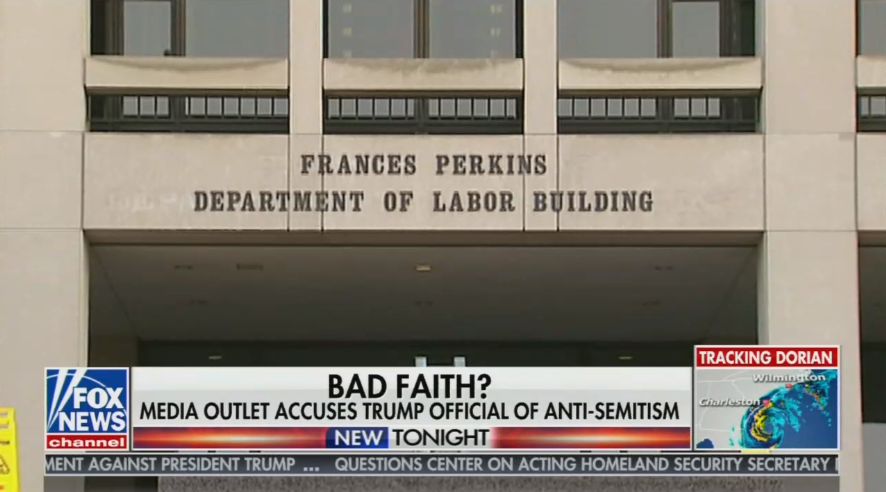 On Wednesday night, news broke that fake news victim and Department of Labor official Leif Olson was reinstated to his position in the Wage and Hour Division after a hatchet job by senior Bloomberg Law reporter Ben Penn forced him out last week. Despite Bloomberg saying they took the false claim of anti-Semitism out of the headline, they refused to retract the story and/or apologize to Olson and only sought to “clarify”.

“Texas conservative Leif Olson exits after 18 days at DOL following question on Facebook posts,” the article still brags at the top of the page. “Olson’s Facebook conversation included a reference that Jewish media ‘protects their own’.”

As has been extensively reported by media outlets on the right and left, Bloomberg’s Penn took sarcastic Facebook comments Olson had made out of context and deceptively portrayed them to make it seem as though he was attacking Jews. “In reality, the Facebook post in question was the opposite of anti-Semitic. It was a clearly sarcastic post from 2016 about Paul Ryan crushing alt-right challenger Paul Nehlen,” the Washington Examiner said.

On that front, all Bloomberg had to say in their update was: “In light of the subsequent events, we removed “Anti-Semitic” from the headline and clarified Olson’s reference to those tropes.” Interestingly, they never explained what the “subsequent events” were that caused them to clarify. Perhaps it was the roasting they received from left, right, and, center.

Their “clarification” didn’t appear to amount to much more than another opportunity for them to snipe at the guy whose life they tried to ruin:

“It was sarcastic criticism of the alt-right’s conspiracy theories and anti-Semitic positions,” Olson said in an interview. He declined to respond to other questions about his resignation and the Facebook post, including whether he wishes to apologize or if he regrets his actions. The remark remained on his Facebook feed through the end of August.

Now that’s some major chutzpah from Bloomberg. What about them? Does Bloomberg wish to apologize or regret their actions? Clearly, the answer was no.

Penn even tried to do a deep dive and find other instances where Olson might have said something that could be twisted to seem anti-Semitic. “The Paul Ryan exchange appears to be the only reference made to Jewish stereotypes. A few weeks later, he took to Facebook again on the eve of the Jewish New Year Rosh Hashanah: ‘My Jewish friends, I wish you a happy new year. My non-Jewish friends, I wish you a happy Jewish new year,’” Penn wrote.

In a late-night article put out on Wednesday, Bloomberg editor Terence Hyland authored an article about Olson’s rehiring by the DOL. “Olson resigned from the agency Aug. 30, less than four hours after Bloomberg Law asked the department for comment on a Facebook conversation that referenced anti-Semitic tropes,” he touted.

Towards the bottom of the piece, Hyland admitted that Bloomberg was catching flack for their story (click “expand”):

Public outcry over Olson’s resignation began Sept. 3, shortly after Bloomberg Law published a story about his Facebook posts and his decision to leave the agency four days earlier. Much of the criticism focused on the story’s characterization of the comments as anti-Semitic in light of context suggesting the comments were sarcastic

The Anti-Defamation League was provided a screenshot and link to Olson’s Facebook post before he resigned and said “the post in question is clearly anti-Semitic.” The ADL updated its statement Sept. 3, after the Bloomberg Law story published, to say it appreciated Olson’s “clarification that he intended to be sarcastic with his posts, and accept his explanation of the content in question.”

Bloomberg Law reported in the Sept. 3 story that Olson said in an interview his 2016 Facebook conversation “was sarcastic criticism of the alt-right’s conspiracy theories and anti-Semitic positions.”

Toward the end of that Facebook conversation, one commenter said Olson’s comments were “epic sarcasm.”

Of course, Hyland didn’t admit Bloomberg was blatantly in the wrong.