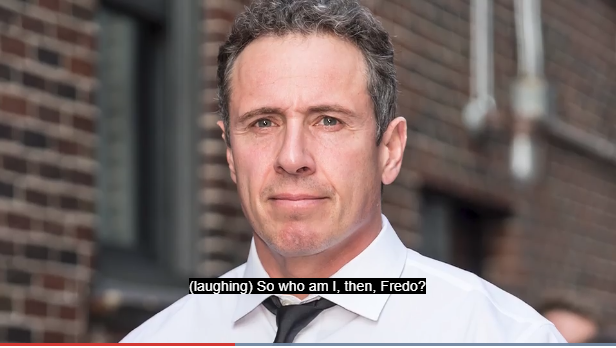 CNN host Chris Cuomo made an absolute fool out of himself in a viral video released Monday night where he’s seen threatening to throw a man down a flight of stairs. The man insulted Cuomo by using the Godfather-based insult “Fredo” (the dumb older brother of the main character and mob boss Michael Corleone), which the CNN host ludicrously claimed was an “ethnic slur” equivalent to using the “N-word.”

Well, it turns out that for a word supposedly as bad as the “N-word,” Cuomo was fine throwing it out himself, allowing his favored guests and colleagues to throw it around as well.

On Tuesday morning, the New York Post uncovered an instance where Cuomo actually described himself as “Fredo”. The kicker was that it was during a radio interview where the host jokingly compared the Cuomo family to the mob.

“There is a group of people — politicos — who always hint they might run, but not necessarily plunge all the way, and they are members of la Cuomo Nostra”, quipped Guardian Angels founder Curtis Sliwa on his AM 970 radio show.

Cuomo came back, jokingly asking: “Who am I, then, Fredo?” Sliwa responded with a big laugh before adding: “Yes, exactly. So you better be careful that your brother Andrew doesn’t kiss you on both cheeks and then all of a sudden they take you out on the middle of the lake and where’s Chris?”

That’s not the only time Cuomo was completely fine with “Fredo” being thrown around. Back in January, CNN political commentator Ana Navarro was on Cuomo Prime Time and slung mud at Donald Trump Jr. by chiding how “daddy kept Fredo back home” and didn’t bring him to the White House.

Cuomo was so fine with the supposed “ethnic slur” that his show’s Twitter account promoted Navarro’s unhinged rant.

Then there was fellow CNN host Jake Tapper, who published a Twitter thread correcting Politico journalist and CNN political analyst Eliana Johnson about the difference in using “Fredo” and “Frodo” when using the insult.

This also wasn’t the first time Cuomo had equated a simple insult with being just like the “N-word”. In February of 2017, Cuomo was speaking with radio host Michael Smerconish on SiriusXM POTUS when he suggested: “fake news” was like the “N-word” for journalists.

“The only thing that’s bothersome about it, is that I see being called ‘fake news’ as the equivalent of the n-word for journalists, the equivalent of calling an Italian any of the ugly words that people have for that ethnicity. That’s what fake news is to a journalist,” he asserted before later apologizing.

It’s strange that he didn’t mention “Fredo” as one of “the ugly words that people have for that ethnicity.”

Cuomo has since issued a public statement about his “Fredo” incident. A statement, not an apology. “Appreciate all the support but - truth is I should be better than the guys baiting me. This happens all the time these days. Often in front of my family. But there is a lesson: no need to add to the ugliness; I should be better than what I oppose,” he tweeted.

Of course, there was no mention of his lie about “Fredo” being an “ethnic slur,” which CNN was now defending as fact, effectively gaslighting America. This is CNN.