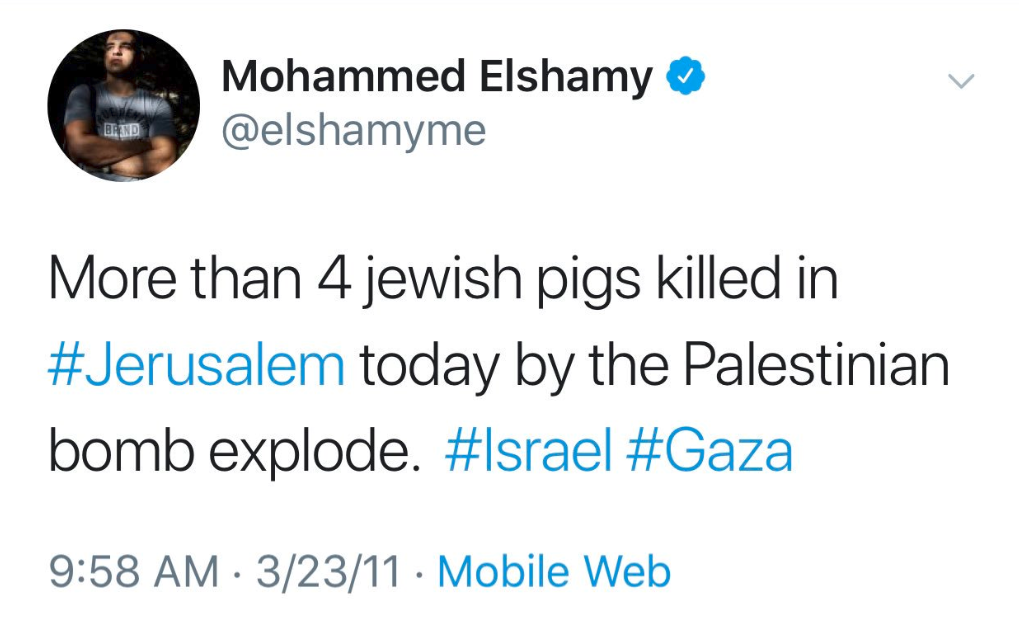 For all of CNN’s suggestions that President Trump was a racist and anti-Semite, they sure don’t seem to catch those tendencies of prospective employees during the hiring process. Instead, they have them resign after they’re exposed on social media. It’s especially troubling when the prospective employee had publicly celebrated the deaths of “jewish pigs” in Jerusalem.

On Thursday, CNN photo editor Mohammed Elshamy was exposed as an anti-Semite after numerous political operatives and news outlets dove into his Twitter history and discovered his hatred. Elshamy has since made his Twitter account private.

In a series of tweets, political strategist Arthur Schwartz highlighted Elshamy’s elation at the news Jews were killed by terrorists in Jerusalem back in 2011. “More than 4 jewish pigs killed in #Jerusalem today by the Palestinian bomb explode,” he wrote.

Daily Wire reporter Jordan Schachtel pointed out that Elshamy was celebrating a terrorist attack that “killed a Christian woman who was studying in Israel & severely injured a 14-year-old Israeli girl who would succumb to her wounds 6 yrs later. The attack injured 39 more.”

Schwartz called out CNN for hiring Elshamy despite a public tweet that read: “Israel is the main enemy for the people of Egypt and shall always remain despite rulers who lick Jewish legs 3/3 #IsraelEmbassy.”

The Washington Free Beacon dug up a series of disgusting tweets Elshamy put out during the rise of the Muslim Brotherhood in Egypt. “Only in #Egypt you find the Zionist embassy being a flag-less embassy,” he proclaimed with a smiley face. “Thr flag has been removed ALLAHU AKBAR #israeliembassy #cairo #egypt #israel”.

“Despite everything happening now in Egypt. I'm proud of the army generation that liberated us from the zionist pigs @ 6 october 1973,” he would add.

It took CNN several hours to respond to the outcry. At 9:46 Eastern time, CNN Media janitor Brian Stelter tweeted out a statement from the network’s communications department. “The network has accepted the resignation of a photo editor, who joined CNN earlier this year, after anti-Semitic statements he'd made in 2011 came to light,” they wrote.

CNN was the same network that would send out investigative reporter Andrew Kaczynski to hunt down and dox Trump supporters who made and shared mean memes about them, but they wouldn’t investigate the histories of their prospective employees. This is CNN.