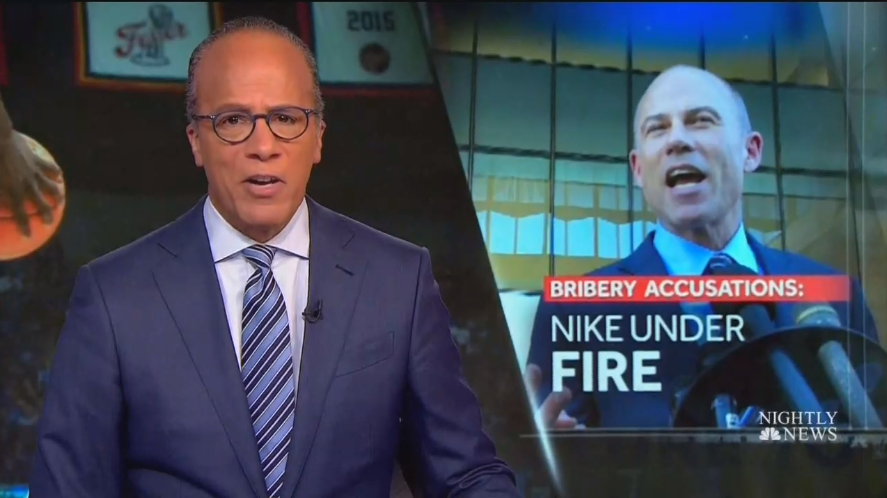 Apparently, the folks at NBC News are gluttons for punishment. During Monday’s NBC Nightly News, the news organization boosted claims made by lawyer and proven huckster, Michael Avenatti that shoe giant Nike was bribing high school athletes to go to schools with Nike deals. NBC treated the claims as serious while downplaying the federal extortion charges against Avenatti for allegedly trying to shakedown Nike for over $20 million.

Thompson parroted Avenatti’s suggestion that Duke University forward Zion Williamson was wrapped up in Nike’s plot, despite later admitting: “But neither Williamson nor his mom are mentioned in Avenatti’s 41-page document dump of text messages and bank statements that he says show Nike paid tens of thousands of dollars to players' families and handlers.”

Late last month, Avenatti was indicted twice by federal prosecutors on extortion and wire fraud charges. The extortion charge was in connection to Avenatti’s alleged attempt to get Nike to pay him over $20 million not the go public with his accusations. “Arrested last month, Avenatti is accused of trying to bilk Nike for more than $20 million,” was all Thompson had to say on the matter.

Meanwhile, a CBS News online report (apparently CBS didn’t think Avenatti was worth the airtime because there was no televised report that evening) described what Avenatti was doing as an “attack on Nike.”

"I'm not f---ing around with this, and I'm not continuing to play games," Avenatti was recorded as saying. "You guys know enough now to know you've got a serious problem. And it's worth more in exposure to me to just blow the lid on this thing. A few million dollars doesn't move the needle for me. I'm just being really frank with you."

NBC News was burned by Avenatti in 2018 when he brought them Julie Swetnick, a woman with a history of lying and who was accusing Supreme Court nominee Brett Kavanaugh of operating gang rape parties in high school. Despite knowing the dubious nature of her allegations ahead of time, NBC repeatedly aired segments of her interview with Kate Snow. The Senate Judiciary Committee later referred Swetnick and Avenatti to the FBI for allegedly lying to Congress.

LESTER HOLT: Next, as Texas Tech and the University of Virginia face-off tonight on the court, the war of words between Michael Avenatti and Nike is heating up on the sidelines. NBC’s Anne Thompson has deals.

ANNE THOMPSON: Tonight attorney Michael Avenatti playing his brand of hardball with Nike: accusing the athletic giant of bribing more than 100 college basketball players, including some of its biggest stars to attend schools with Nike contracts.

MICHAEL AVENATTI: You know what's disgraceful? Bribing armature athletes in need and putting them at[sic] their families at risk for federal charges all in the interest of corporate profits.

THOMPSON: Among the players he says are ensnared in the alleged scheme is Duke University star forward Zion Williamson, one of the best players in the nation. Avenatti claims Williamson's mother was paid by Nike for bogus consulting services to get Zion to go to Duke, claims Duke says it's investigating.

But neither Williamson nor his mom are mentioned in Avenatti’s 41-page document dump of text messages and bank statements that he says show Nike paid tens of thousands of dollars to players' families and handlers.

Nike saying it “will not respond to the allegations of an individual facing federal charges of fraud and extortion.” Arrested last month, Avenatti is accused of trying to bilk Nike for more than $20 million.

AVENATTI: I will be fully exonerated and justice will be done.

THOMPSON: The allegations now under review by the schools, as tonight the college basketball season ends but the scandals do not. Ann Thompson, NBC News.