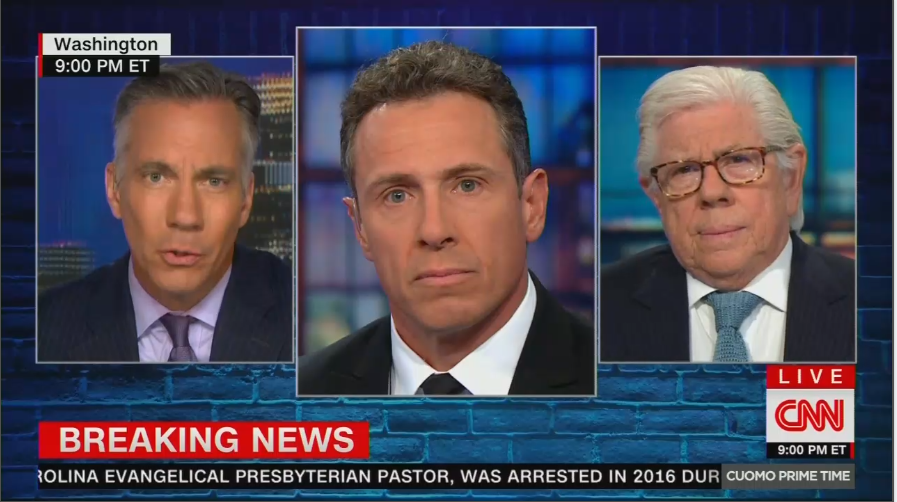 A week after Michael Cohen’s attorney Lanny Davis blew a massive hole in their reporting and nearly a day after he admitted he was their anonymous source, CNN’s Jim Sciutto and Carl Bernstein finally got around to answering the mounting questions surrounding their increasingly dubious story about claims the President knew the Trump Tower meeting in advance. Despite their key source’s public retreat, CNN continued to stand by their reporting.

“In recent days, one of Michael Cohen's lawyers has repeatedly changed his account of what Cohen knew about President Donald Trump's involvement in a controversial meeting during the 2016 campaign,” the duo complained at the start of their piece.

On the July 26’s Cuomo PrimeTime, when the network’s junior sleuths rushed onto the program to proclaim they had the next major bombshell (written alongside colleague Marshall Cohen) that would damage the Trump presidency. Nearly a month later, on August 22, Davis appeared on CNN’s AC360 and reversed course and shot down his original claims to the network.

Tuesday’s overdue update appeared to be spurred on by a BuzzFeed News exclusive where Davis finally admitted he was their erroneous source. While Sciutto and Bernstein never actually confirmed that Davis was their guy, they desperately tried to distance themselves from him, and placed the onus on him to correct their reporting:

Davis acknowledged over the weekend that he confirmed CNN's story to other news organizations.

He now says that he also was one of the sources for CNN's story.

For more than three weeks, Davis did not raise any issues to CNN about its reporting.

Despite CNN and the rest of the liberal media acting as if the claims were a massive nail in Trump’s figurative coffin, they defended their story by suggesting they were merely reporting on what Cohen was thinking about saying to the Special Counsel:

The CNN story noted, based on sources, that Cohen did not have corroborating evidence to back up his claim. CNN did not report whether Trump knew about the meeting before it happened -- only that Cohen was making that claim while hoping for a deal from prosecutors.

“Cohen, unlike Davis, has not publicly addressed what he might have said to friends, associates or reporters about these matters,” they added in their feeble defense.

Conspicuously absent from Sciutto and Bernstein’s follow up, was any explanation of why they asserted that “contacted by CNN, one of Cohen's attorneys, Lanny Davis, declined to comment.” When, in reality, he was their source.