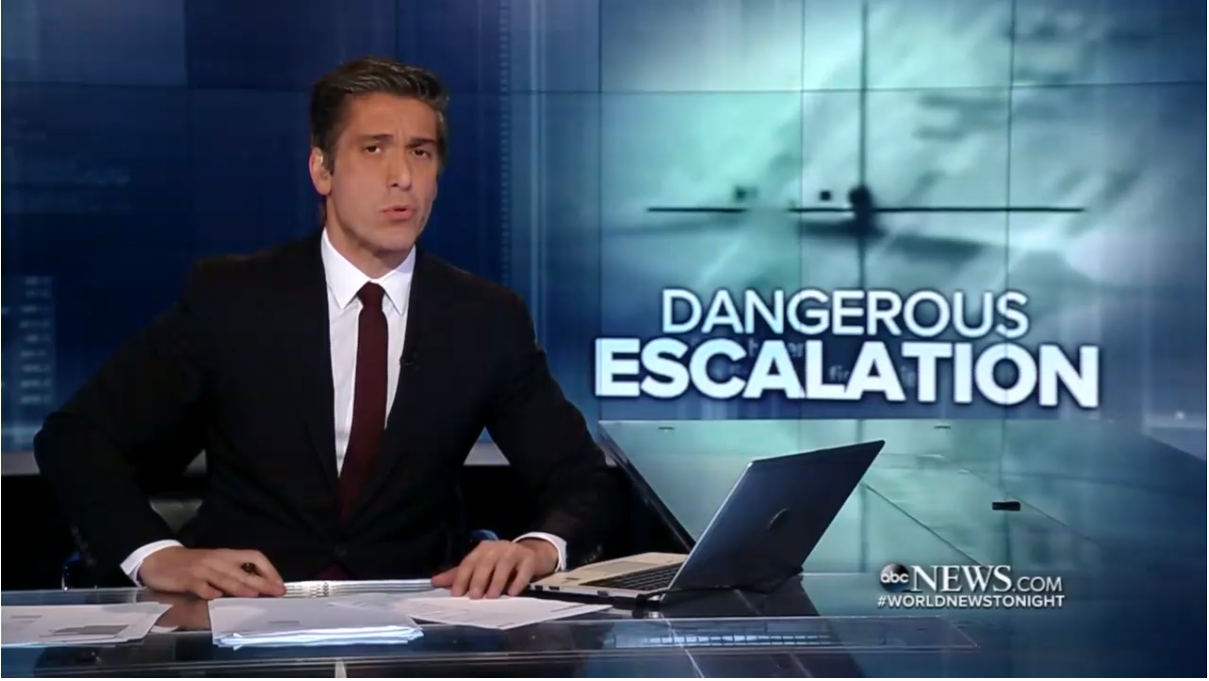 Following Israel’s counterstrike against Iranian military forces in Syria in response to 20 missiles being launched int the Golan Heights late Wednesday into Thursday, ABC’s World News Tonight took to the airwaves Thursday to paint the United States and Israel as the cause of the "dangerous escalation." And meanwhile, on NBC Nightly News, chief foreign correspondent Richard Engel warned that the U.S.’s Israel embassy relocation to Jerusalem could push the Middle East “over the edge.”

As sensationalist ABC anchor David Muir lead into their coverage of the Israel airstrikes, he made it seem as though the airstrikes were really part of leaving the Iran nuclear deal which Israel helped with:

Meantime tonight, just days after the President ripped up the nuclear deal with Iran, pulling the U.S. out, tonight, Israel now striking Iranian military targets in Syria. These are the images coming in tonight, and remember, President Trump pointed to Israel and Benjamin Netanyahu's presentation and evidence against Iran as part of his reason for pulling out.

Actually mentioning the fact that Iran was the one to strike first seemed to be a complete afterthought to Muir. “Again tonight, Israel now launching those strikes, they say after a failed Iranian rocket attack. Is this a sign of what's coming?” Even that acknowledgment of an Iranian attack didn’t really set up the timeline of events well.

Notice how Pannell used the phrase “Israel says,” as if there was an uncertainty about it. While Iran has not taken responsibility for the missile attack, they have not denied it was them either. And while he noted the Iranian attack was ineffective, there was no mention of how it was stopped by Israel's Iron Dome missile defense system. “And in all this, U.S. forces still in on the ground in Syria as the White House also condemns what it calls Iran's ‘Provocative rocket attacks,’” he huffed before cutting back to live.

In wrapping up his report, Pannell strongly asserted that the principle agitator in the whole situation was somehow Israel. “These attacks coming just hours after President Trump pulled out of the Iran nuclear deal. These attacks certainly seem like a reaction by Iran to that decision, and above all, growing military pressure from Israel,” he declared.

Meanwhile, on NBC Nightly News, Engel wrapped up his segment on the topic by pointing out that Monday was when the U.S. Consulate in Jerusalem would become the U.S. Embassy. Of course, he suggested it meant that the possibility of peace was dead. “Palestinians who clashed with Israeli forces today said the symbolic U.S. Embassy moved kills any hope of Israeli-Palestinian peace… But will it also push the increasingly tense Middle East over the edge?”

While both of these liberal news outlets were blaming the U.S. and Israel for destabilizing the region, they failed in their duty to mention that Iran was the one who was supplying Hamas terrorists in Gaza with the missiles that rain on Israeli civilians. They failed to mention that it’s Iran who proclaims they want to push Israel into the sea. And they also failed to mention that Israel’s counter-attack had support, not just from the U.S., but from other counties in the region as well.