ABC, Univision Fail to Mention AG Accused of Beating His Girlfriends Is a Democrat 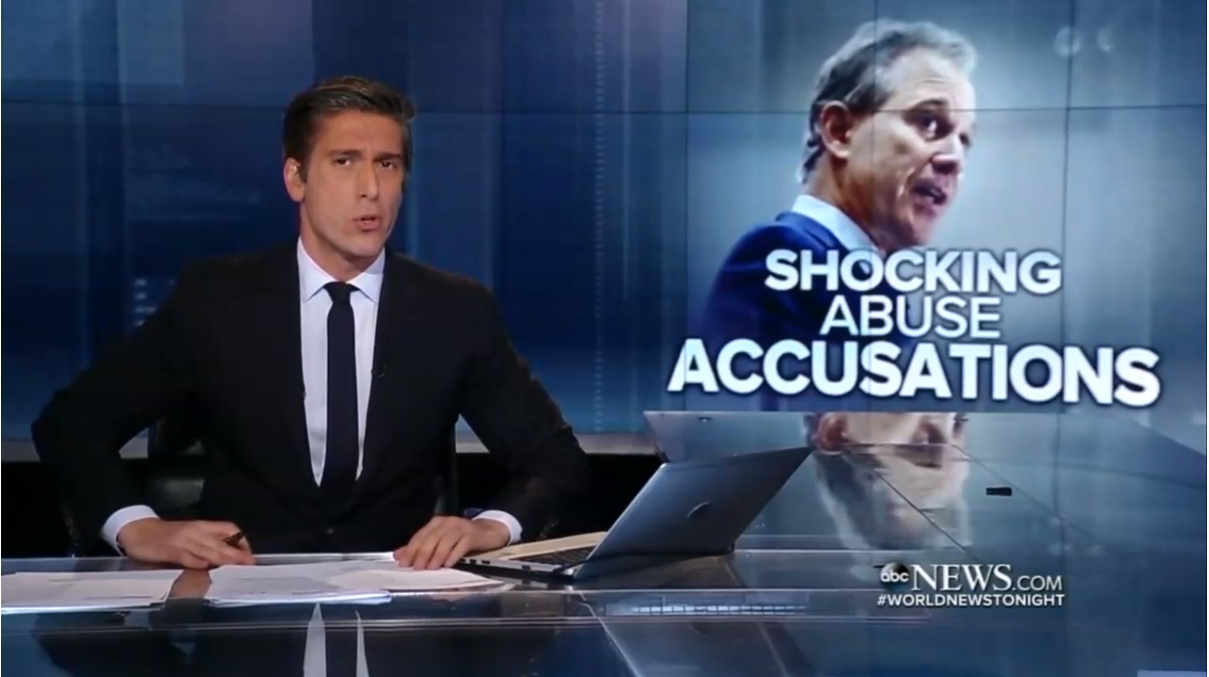 It took former Democratic New York Attorney General Eric Schneiderman three hours to resign Monday night after accusations arose alleging he would violently strike his girlfriends without their consent. But throughout ABC World News Tonight’s two-minutes-and-21-second report on the situation, there was not a single mention of the fact that he was an elected Democrat. In contrast, both CBS and NBC noted that important detail.

Over on CBS Evening News, Schneiderman’s party affiliation was mentioned not once, not twice, but three times. “He was at the forefront of the #MeToo movement. Now a top Democratic official is accused of sexual abuse,” anchor Jeff Glor stated during the opening tease for the program.

Glor repeated himself while he was introducing the segment: “One prominent politician's career imploded with shocking speed last night. New York State's Democratic attorney general went from a hero of the #MeToo movement to a pariah within hours.” A short time later, reporter Jericka Duncan played a soundbite of New Yorker magazine investigative reporter Ronan Farrow, who broke the story, explaining why Schneiderman’s party ID played a role:

These are women who had nothing to gain by coming forward, and everything to lose. Many of them hesitated for quite some time. Their friends and loved ones told them don't do this, either because they feared that there would be that retaliation or because they just felt his work for the Democratic Party was too good and too important to jeopardize.

Although they only noted it once, NBC Nightly News also felt it was necessary to point out that Schneiderman belonged to the Democratic Party. “His downfall, all the more mind-boggling, because Schneiderman, a Democrat, publicly was a champion of women, suing Harvey Weinstein for sexually harassing employees,” reported Anne Thompson.

It wasn’t like ABC was pressed for time because they gave it an entire report and had ample opportunity to note that detail. “New York Attorney General Eric Schneiderman is out of a job tonight after a New Yorker investigation detailed allegations of violence and abuse by seven women he'd been involved with,” announced anchor David Muir as the segment began.

And as ABC reporter Linsey David’s report started, she led off by bizarrely describing Schneiderman as a “casualty.” “New York’s highest-ranking law enforcement officer dethroned tonight, another casualty from the #MeToo movement he so vehemently supported,” she said.

As for the major Spanish-language networks, Univision ran a two-minutes-and-15-seconds-long report and failed to mention Schneiderman's party affiliation. Meanwhile at Telemundo, they ran a 45-second-long news brief and managed to fit in the fact he was a Democrat.

It’s very disappointing that ABC would continue to play the typical partisan games while covering something so disturbing. If the parties were reversed, there’s no doubt they would have noted he was Republican several times and ask for reaction from his colleagues.

DAVID MUIR: Next here, the major resignation that took effect just moments ago right here in New York City. New York Attorney General Eric Schneiderman is out of a job tonight after a New Yorker investigation detailed allegations of violence and abuse by seven women he'd been involved with. It is a stunning fall tonight for a man who said he was a champion, an advocate for women. Here's ABC's Linsey Davis.

ERIC SCHNEIDERMAN: We must reimagine a world where predators are exposed and held to account and survivors are supported and empowered at every level.

DAVIS: Four women now tell New Yorker magazine that Schneiderman is actually an abuser who physically attacked them. Two of the women, Michelle Manning Barish and Tanya Selvaratnam, spoke on the record, alleging "he repeatedly hit them, often after drinking, frequently in bed and never with their consent." And say that "he threatened to kill them if they broke up with him."

RONAN FARROW: These women talk about slapping, hitting, choking. We reviewed medical records and spoke to a doctor who said that an ear was bleeding long after the incident.

DAVIS: Just three weeks ago, Schneiderman tweeted support for those "who spoke up about the sexual harassment they endured at the hands of powerful men." Now Barish tells the magazine, "You cannot be a champion of women when you are hitting them and choking them in bed," adding Schneiderman told her, "I am the law."

ANDREW CUOMO: No one is above the law. These women should have their day in court.

DAVIS: Schneiderman initially responded to the allegations saying: "In the privacy of intimate relationships, I have engaged in role-playing and other consensual sexual activity. I have not assaulted anyone." Then, just three hours after the article was posted, he submitted his resignation, saying that while he strongly contests the accusations, "They will effectively prevent me from leading the office's work at this critical time."

MUIR: And Linsey Davis here with us here tonight. I know Linsey and the team talking with Ronan Farrow, one of the writers of this investigation at the New Yorker. And in the meantime, the Governor said, “no one is above the law” today, and the Manhattan DA is now investigating possible criminal charges here?

DAVIS: That's right, David. And based on the allegations there are several possible crimes here, including assault and harassment. And some of these allegations would fall within the statute of limitations.

MUIR: All right Linsey, you’ll stay on it. Thank you very much.