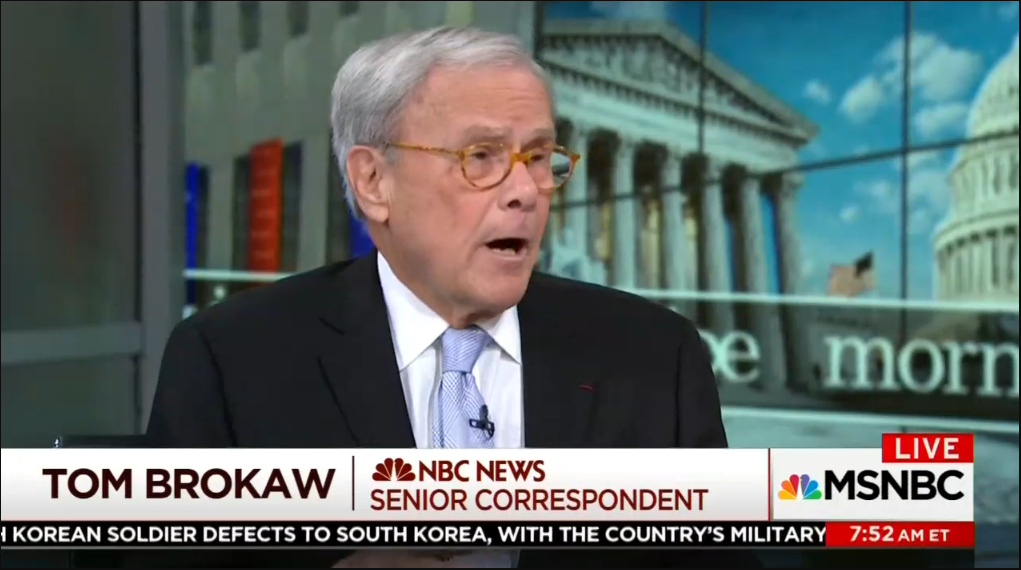 On Thursday night, former NBC anchor Tom Brokaw was the latest journalist to find themselves under fire for accusations of sexual misconduct. In a very detailed and eerie report, entertainment magazine Variety published the accusations from former NBC correspondent Linda Vester, who was 28 at the time and “[nearly] 30 years younger than him.” She accused the former NBC Nightly News anchor of trying to force her into “an affair of more than passing affection,” as Brokaw himself allegedly told her. Brokaw denies the allegations.

According to Variety, they had been working on the story for “several months” and were able to corroborate Vester’s account. “Vester alleged that Brokaw physically tried to force her to kiss him on two separate occasions, groped her in a NBC conference room and showed up at her hotel room uninvited,” the magazine wrote. And apparently, Brokaw would come to call these hotel room visits “milk and cookies.”

The magazine noted that Vester was speaking out to expose the toxic environment for women that permeated NBC News. “She’s speaking out now, because she believes her story sheds light on the culture at NBC News, where she believes male bosses treated their female colleagues as objects.” And she didn’t report Brokaw at the time because she was afraid he would sink her career.

In her account, Vester recalled that her first interaction with Brokaw was during a 1993 trip to Denver, Colorado to cover the visit of Pope John Paul II. “We were in the Denver bureau, and there was a conference room. I’m standing there, and Tom Brokaw enters through the door and grabs me from behind and proceeds to tickle me up and down my waist,” she remembered. “And his jaw was hanging open. Nobody acted like anything wrong was happening, but I was humiliated.”

In January of 1994, Vester says Brokaw bombarded her with messages trying to get her to go out for drinks with him one night. “I was trying to use humor to signal that I was not interested in whatever he was suggesting, so I wrote, ‘I only drink milk and cookies,’” she recalled. Vester explained she missed her fight that night and because of how NBC tracked their correspondents travel, Brokaw was aware of it.

“I received three calls that night. One was from a friend. Another was from a source. And the third was from Tom Brokaw. He said he was coming over to order milk and cookies,” Vester told Variety. After he allegedly made his way into her hotel room, he said he wanted an affair. She protested by noting he was married and she was Catholic. According to her, he was put off and compared her to Tim Russert. A short time later, he allegedly made his move:

He grabbed me behind my neck and tried to force me to kiss him. I was shocked to feel the amount of force and his full strength on me. I could smell alcohol on his breath, but he was totally sober. He spoke clearly. He was in control of his faculties.

According to Vester, Brokaw tried to twist what had happened that night by “engaging in verbal gymnastics,” as she put it. And over a year later, Vester was in London covering the 50th anniversary of VE Day when Brokaw allegedly tried again. “I’m out of the office, doing a story. When I get back, I found that Tom had left a small square post-it note on my desk that said, ‘Milk and cookies?’”

An observer of the time line should note that Vester’s account allegedly occurred after the Anita Hill controversy and during the Paula Jones lawsuit against Bill Clinton. If the accusations are true, it could explain why NBC wasn’t big on the Jones lawsuit especially since it seemed like no one there batted an eye at Brokaw’s alleged behavior. This news accusation comes as NBC is under increased scrutiny for overlooking Matt Lauer’s transgressions.