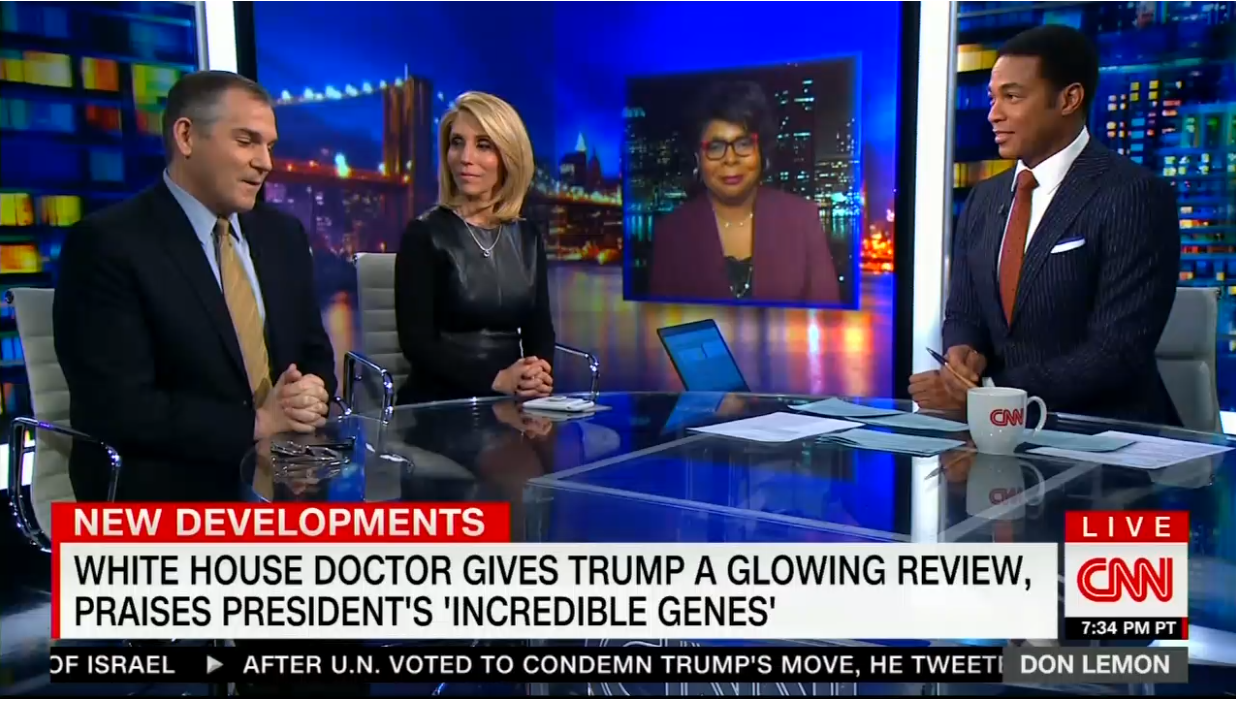 CNN is the self-proclaimed arbiter of truth with their so-called “#FactsFirst” campaign. But after Presidential Physician and Navy Rear Admiral Dr. Ronny Jackson announced that President Trump was in both excellent mental and physical health, the anti-Trump news network had their conspiracy theories in a death grip. And during Tuesday’s CNN Tonight, host Don Lemon and his panel of liberal journalists cast doubt on Dr. Jackson’s finding and essentially claimed he was lying for Trump.

After playing clips of Dr. Jackson telling the White House press corps that the President was in good health minus the need to lose a few pounds (as with most Americans), the camera cut back to Lemon as he was laughing at the doctor. “Sorry. Clean bill of health. Incredible genes, right,” he mocked.

New York Times columnist Frank Bruni was the first to speak up as he delivered a backhanded compliment about how, for once, President Trump and White House were being transparent about something.

Bruni then claimed that he thought the doctor was lying to the press. “And so, do I believe every single number there? Not exactly,” he chided. Lemon responded by trying to walk back his childish laughing, explaining: “I was just chuckling at how energetic he was, not what he was saying about the president.”

“He seemed like a Trump fanboy if you think about it yeah,” Bruni added. “When he said 239 pounds -- I know I'm being a 'girther,' but, come on,” Lemon piled on. They failed to mention that Dr. Jackson was President Obama’s doctor as well.

So-called “girtherism,” as Lemon admitted to believing, was an online conspiracy theory that had begun to circulate in left-wing echo chambers and claimed the doctor was a dirty liar and President Trump was actually tubbier than the medial report said.

It also seemed to be gaining steam among the liberal media, seeing as NBC’s Ken Dilanian took to Twitter to openly challenge the President to publically step on a scale. MSNBC’s Chris Hayes found it humorous. And The New York Times reporter Maggie Haberman seemed to think the lie was to keep Trump from being labeled obese, which the press would’ve had a field day with no doubt.

The last liberal journalist to knock the President around was CNN’s Dana Bash who cryptically sneered about how “telling” it was that Trump had asked for a cognitive exam to be conducted. “And I just thought it was very, very telling that he explicitly said that he wasn't going to do what he called a cognitive test, but the president wanted him to do the test and then go out and report on it. That is so, so telling,” she said.

These are the people who shout “facts first,” yet their shows are filled with speculation, gossip, and conspiracy theories. This is CNN.

Dr. RONNY JACKSON: If the president had a healthier diet over the last 20 years, he might live to be 200 years, I don't know. He has incredible genes I just assume.

I was not going to do a cognitive exam. I had no intention of doing one. The reason that we did the cognitive assessment is plain and simple: Because the president asked me to do it.

His overall health is excellent. Are there a few things he could do to make himself a little healthier? With the diet and exercise, absolutely. 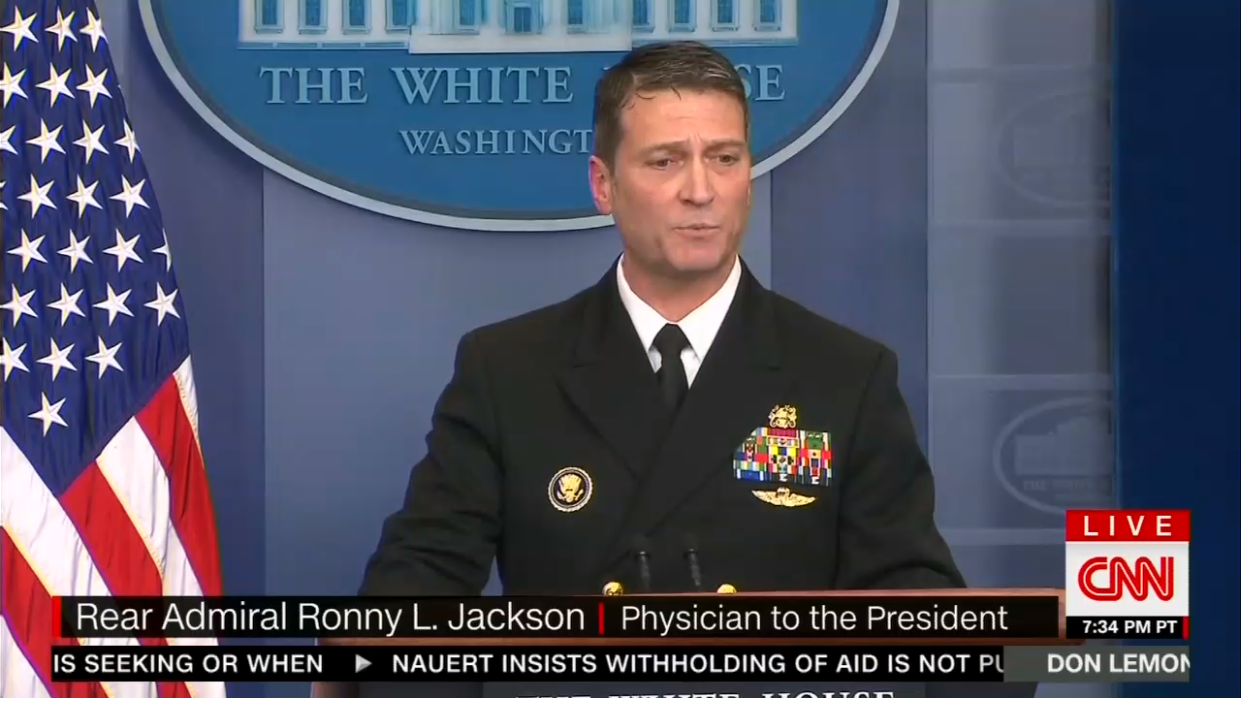 I would say he sleeps four to five hours a night. And he's probably been that way his whole life. That's probably one of the reasons he's been successful.

FRANK BRUNI: Apparently. Listen, I want to -- let's take it at face value. And we spend so much time criticizing the president, as we should, that's our job. I want to say, the fact that he came out and answered questions for an hour today, that surprised me, and I think that surprised you, Dana. That's a good thing. And so, do I believe every single number there? Not exactly.

LEMON: I was just chuckling at how energetic he was, not what he was saying about the president. But I mean –

BRUNI: He seemed like a Trump fanboy if you think about it yeah.

BRUNI: We rightly complain all the time about this administration's lack of responsiveness to us. That guy came out here for an hour today, he answered a lot of questions, let's give credit where it's due.

DANA BASH: And I just thought it was very, very telling that he explicitly said that he wasn't going to do what he called a cognitive test, but the president wanted him to do the test and then go out and report on it. That is so, so telling.

LEMON: Thanks, everyone. I appreciate it.