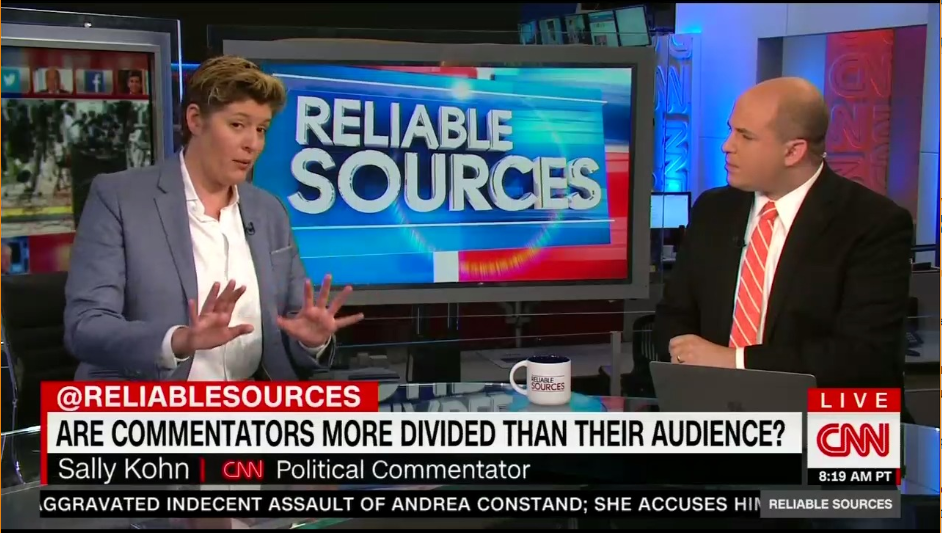 In the wake of the attack on a Congressional Republican baseball practice that put Congressman Steve Scalise and others in the hospital, there had been a collective call from politicos to elevate their rhetoric. During CNN’s Reliable Sources on Sunday, host Brian Stelter wanted to have the discussion about civility in the media. But the seriousness of such a discussion was discredited by the presence of CNN Commentator Sally Kohn, who has a long history of uncivil attacks against her political opponents.

“After those calls for unity, the interviews of congressional leaders on CNN, we heard a lot more of the same kind of partisanship and polarization on talk radio and social media, people blaming the other side for what had happened,” bemoaned Stelter at the start of the segment.

Kohn stated that she found it “interesting” how both sides only come together after something terrible happens, and asked: “Why don't we do that before shots are fired or before we cross the line? Why don't we realize…” “We have a hate problem in our country. We have a problem of dehumanizing, attacking, otherizing the other side far too much,” she added. “We can argue, we can disagree, we can do so in a civil way without demeaning and debasing our opponents.”

She made a good point, but it came off as really insincere since she has a long and document career of “dehumanizing,” “attacking,” and “otherizing” the people she disagreed with.

In November 2015, Kohn wrote in her Daily Beast column that Christian “hardliners” were just like ISIS terrorists. During the height of the GOP primaries, Kohn smeared Trump supports as racists, claiming they “are only voting for him because he's a white guy” and that they wanted to make the capitol white again. She had even asserted that 2016 campaign was about “stopping us from being Nazi Germany,” and warned that Trump would start putting people in “internment camps.”

Of course, Kohn’s comments about civility on Reliable Sources would’ve been more sincere if she had denounced her previous uncivil statements and explained how she was wrong, but she did no such thing.

It’s also worth noting that Stelter himself has a catalog of uncivil insinuations and smears he has leveled against President Trump in the past. In December 2016, Stelter described Trump’s victory as a “national emergency” because of his alleged ties to Russia. Without hesitation, he often insinuates Trump is a ruthless dictator, once asking: “Do citizens in dictatorships” look at Trump and say “Oh, that's what my leader does.” And in an apparent attempt to blame the victim, Stelter had claimed the firebombing of a North Carolina GOP office was because of Trump’s “overheated” rhetoric.

It’s a shame the conversation of civility in the media wasn’t taken more seriously since there have been numerous incidents since the shooting that should’ve been called out. For instance, MSNBC’s Joy Reid asserted that Scalise was a racist and homophobe, then whined that she was afraid she couldn’t talk about it anymore. On Friday, Politico’s Roger Simon slammed the media for daring to care about a Republican congressman getting shot. And on the day of the attack, MSNBC’s Chris Matthews started off Hardball by openly declaring the shooting wasn’t important enough to be talked about first.

Stelter could have taken the opportunity to make a powerful statement about the need for civility in journalism by calling out those that need to be exposed. But he instead chose to discredit the conversation by inviting a noted uncivil commentator. The moment was lost.

BRIAN STELTER: But after those calls for unity, the interviews of congressional leaders on CNN, we heard a lot more of the same kind of partisanship and polarization on talk radio and social media, people blaming the other side for what had happened. Let's get into it now with Sally Kohn she’s a liberal CNN commentator and columnist for the Daily Beast and Steve Dace, he’s in Iowa, a columnist for Conservative Review and radio host. 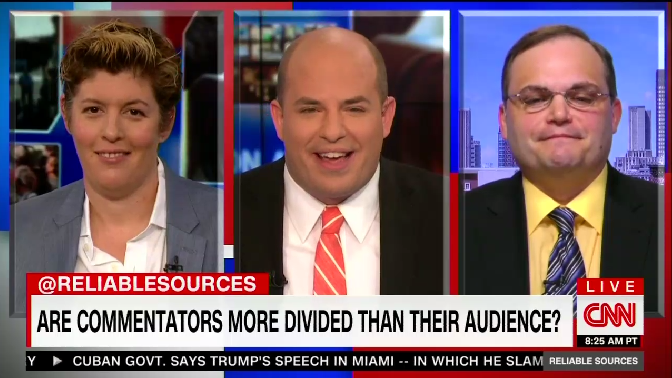 SALLY KOHN: Look, I think it is interesting and meaningful how when moments like what happened at the Congressional baseball practice happen, that people on all sides of the aisle come together and say, “Whoa, this is too far, this is too much.” Now, the question is, and I think this is to Kellyanne's point, why don't we do that before. Why don't we do that before shots are fired or before we cross the line? Why don't we realize, and I agree with Steve entirely. We have a hate problem in our country. We have a problem of dehumanizing, attacking, otherizing the other side far too much.

We can argue, we can disagree, we can do so in a civil way without demeaning and debasing our opponents. And when it goes too far, we suddenly all go, “Whoa, wait a second!” Why didn't that happen before in our minds? I was really struck this week that Ted Nugent, of all people, said-- and this is by the way to Ted’s credit. It’s not a sentence I thought I would ever say. To his credit, he said the hateful rhetoric has gone too far.

KOHN I actually don't care he's doing it, I'm glad he's doing it. But it raises the question of: Well what wasn't triggered in your mind when you were saying the sort of things that now that the consequences play out, you go, whoa” And I think that applies to musicians and certainly to those of us in the media and those of us who create a media environment that actually gives points and credit the more angry, the more hateful, the more extreme your rhetoric is. That's a problem.