Tur Can Poke Fun at Spicer’s History Gaffe, But She Has Her Own List of Them 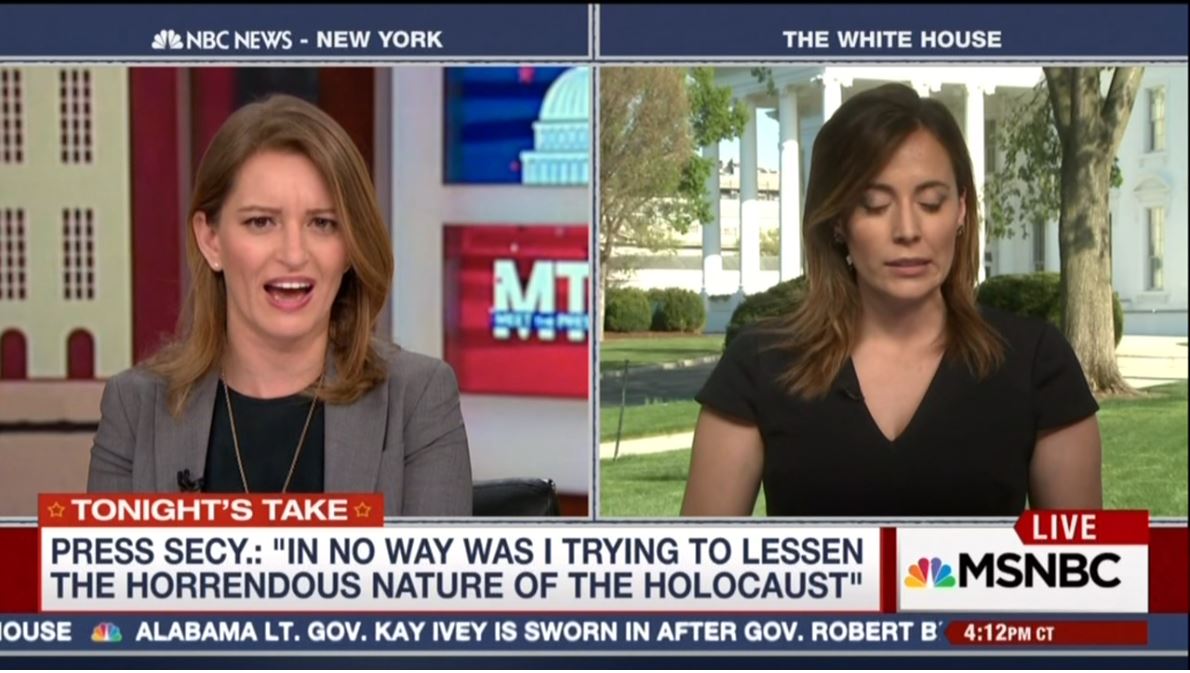 For White House Press Secretary Sean Spicer, Tuesday was filled with embarrassment after he made a historical gaffe when trying to compare Bashar al-Assad to Adolf Hitler. During MSNBC’s MTP Daily, fill-in host Katy Tur poked a little fun at the Press Secretary. “Sean Spicer stepped in it a little while ago at the press briefing room when he compared or tried to make a comparison to Hitler saying: ‘not even Hitler gassed his own people with this type of gas,” she told reporter Hallie Jackson. Tur might want to be careful throwing those stones since she herself has had an issue with recalling more recent history.

Back on February 20, Tur got into something of an argument on air with Florida Republican Congressman Francis Rooney. During a discussion about possible Russian connections to Trump’s campaign, Rooney tried to remind Tur that President Obama had made a promise to Russian President Vladimir Putin to be “more flexible” after the 2012 election. Tur then infamously blurted out “I'm sorry, I don't know what you're referring to, Congressman.”

After a couple uncomfortable moments, Tur ended the segment. Soon after, she took to Twitter to explain her ignorance. Her excuse was: “To be fair, I didnt [sic] touch politics in 2012. I almost exclusively covered fires and shootings in NYC area.” “And I'd rather be honest about what I know and don't know in the moment,” she wrote in a second tweet. But that wouldn’t be the last time she would make a flub when it came to history.

A few weeks later on March 6, she botched an attempt at recalling a major accusation in the investigation into possible Russian connections to the Trump campaign. This time she got into an argument with Utah Republican Congressman Chris Stewart about what the media claimed occurred during the 2016 campaign.

But it was The New York Times, the so-called “paper of record,” that made that claim. On February 14, they ran the headline, “Trump Campaign Aides Had Repeated Contacts With Russian Intelligence.” It doesn’t really get any more direct than that, yet she was extremely skeptical of its existence. Her first excuse about not being around politics when the news broke doesn’t fly in this case.

A short time later on March 21, she got into another argument with a Republican congressman (there seems to be a pattern forming here) about the reality of the media’s bias in favor of Democrats. “Well, that’s an easy allegation to make. It’s not an easy allegation to prove,” she told Virginia Congressman David Brat. He tried to explain to her that if one studied the donations of journalists they mostly go to the left. But Tur remained skeptical.

And that’s only a samplings of her mishaps with history and the facts. Tur getting on Spicer’s case in regards to “stepping in it” when it comes to history, is sort of like when serial liar Brian Williams chastised the White House for creating an “alternative universe.” It brings to mind the old saying that “people who live in glass houses shouldn’t throw stones.”

KATY TUR: Hallie, but on the point you just made--- the, the, the phrasing – the paraphrasing of Donald Trump’s interview with Fox News. He made a mention that even the worst – the worst dictators in the world haven’t used this type of sarin gas. Sean Spicer stepped in it a little while ago at the press briefing room when he compared or tried to make a comparison to Hitler saying: ‘not even Hitler gassed his own people with this type of gas. Obviously, Hitler gassed many of his own people. Six million Jews. Was this a coordinated line? It kind of sounds like if the President is saying t to Fox Business that this was a line that they were planning on using.

HALLIE JACKSON: Right. I think probably a lot of it is in the nuance or subtlety of how they are describing this. And Katy I will tell you this: when asked directly whether this was as you are saying, this coordinated talking point that the administration wanted to push, the response from the Press Secretary that was it was not. His remark in that briefing that you are talking about was off the cuff. Sean Spicer is telling us ‘meant to note the tactic.’

As you point out and as we’ve been talking about this afternoon, there have been a series of clarifications. One in person and on camera and then several more written statements from Sean Spicer attempting to—you can say walk back or clarify or say what he meant to say about this implied comparison, or really explicit comparison between Bashar al-Assad and Adolf Hitler. But it is certainly something that created quite a bit of buzz. And again raising some questions about the messaging strategy specifically when it comes to Syria